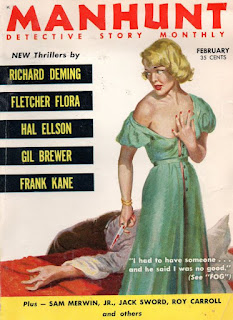 This February 1956 issue of Manhunt is a special thing indeed, as it features the first of two stories Herbert Kastle would contribute to the magazine. I’ve wanted to read either of these stories for a long time, but it took me a while to track down one of the mags Kastle appeared in. His story is “They’re Chasing Us!,” and while it’s entertaining, it is hard to compare to Kastle’s later lurid masterpieces like Ladies Of The Valley.

Kastle was new in the writing field in ’56, still credited as “Herbert D. Kastle,” thus his name isn’t even headlined on the cover. And his story is buried toward the back, though of course I read it first. It’s only a few pages long (double-columned pages like all the other stories are, though), and it concerns a pair of brothers named Sid and Mel. In their 40s, the two share an apartment with Norma, Mel’s woman, though Sid lusts for her – a harbinger of future Kastle material is that this story features a guy who lusts after a woman who belongs to someone else and who successfully pressures her into having sex with him.

Sid and Mel are crooks, making their living knocking over stores. They want to get out of the hellhole of Brooklyn, though Norma complains that their neighbors, who have go-nowhere jobs, are actually doing better. This is proven at the start of the tale, with Sid returning to the apartment after the latest robbery and discovering they didn’t come off with as much cash as expected. Meanwhile, he bullies Norma into sex, which Kastle of course keeps off-page. When Mel comes back he instantly figures out the two have been screwing, but he’s cool with it. Another Kastle mainstay – the screwed-up “family” in which the single woman is shared, a la Cross-Country.

Then someone knocks on the door, claiming to be from the phone company, and the brothers instantly figure it’s the cops. They escape, there are gunshots, they shoot at some cops while they run. They abandon Norma back in the apartment. Mel’s shot in the ass and Sid manages to pull him into a car, taking hostage some random woman on the street as they go – they pistol-whip her and dump her. An underworld doc fixes Mel up in the back seat while Sid drives around, and the tale ends with Sid realizing their cash is low and their chances even lower, but he’s going to try to get them to safety.

This is a fast-moving tale and Kastle has the hardboiled vibe down pat; the brothers carry .38 revolvers and say all the right tough-guy dialog. But as mentioned it doesn’t feel like Kastle at all; if you were to tell me this was by say Fletcher Flora or Richard Deming or some other random contributor of the magazine I wouldn’t know otherwise. The same cannot be said of the only other early Kastle short story I’ve read, “Game,” which Ed Gorman collected in his anthology American Pulp; that one is pure Herbert Kastle, about a guy who thinks he’s saving some woman from a twisted relationship. I enjoyed that one so much I’ve been meaning to re-read it.

There are a bunch of stories in this issue of Manhunt. I didn’t read all of them. Here are my thoughts on the ones I did read:

“Block Party” by Sam Merwin, Jr – this 12-page “novelette” opens the magazine and concerns another pair of crooks: Tony and Carl, who when we meet them are slipping on “plastic rubber masks” and pulling a hotel heist – one of them’s in a Hopalong Cassidy mask and the other in a Joan Crawford mask, the latter to fool witnesses into thinking they’re “a pair of queers.” They’ve been hired by Dixon to steal the contents of a safe which contains blackmail photos, and they’re free to take their own haul.

But the way these things go, someone dies – Carl accidentally hog-ties the night manager too tightly and he strangles to death. This doesn’t sit well with Dixon, who tells the guys they need to escape to Mexico. He’ll even drive them to the bus stop. But when the car “breaks down” on the drive, Tony figures it’s a rubout; he drives over Dixon and he and Carl get on a bus; the tale ends with Tony figuring he’ll have to kill Carl as well. This one was okay, competently written, but didn’t offer much new.

Up next is an actual novelette, “Sauce For The Gander,” by Richard Deming; this one features a recurring character named Clancy Ross. A gambler who owns the Club Rotunda, Clancy is given zero introduction; about the most we learn is he has a scar on his face. His sidekick is a dude named Sam Black. This overlong-but-simple tale concerns the new Club Rotunda bookkeeper who is murdered by someone, and Ross helps the cops figure it out who did it. Along the way he has run-ins with various Syndicate hitmen and the bookkeeper’s hot widow, who throws herself on Ross for some off-page sex. This sequence leads to the unforgettable line, “I’m not a nympho, Clancy.” Probably the only time these words have ever been spoken. This one’s just overdone, a simple story blown to extreme portions.

Much better is “Fog,” by Gil Brewer, a story recently collected in the Brewer anthology Redheads Die Quickly. It’s the usual Brewer tale about simmering lust that explodes into full-bore sex. It’s about a guy visiting Florida and looking up his old friend; instead he finds the man’s sexy wife home alone, wearing a see-through robe, complaining about the heat, and coming on to him strong. He beats a retreat and goes back to his hotel, only to be called by her late that night. She claims her husband disappeared in the fog that has settled upon town, and the two walk around in it looking for him. It’s a surreal tale which of course leads up to them having hot off-page sex. The cover of the issue blows the surprise end, though – turns out there’s a good reason why we haven’t seen the nympho’s husband yet.

Robert Bloch gives us “Terror In The Night,” a first-person short-short about a woman who has escaped a mental asylum and swears to the narrator that murder and rape occurs behind the barred windows of the place, but our narrator and his wife think she’s making up the story due to her insanity, particularly the part about the bloodhounds sent after her. She runs away. Ends as expected with the narrator and his wife being woken that night by the howls of bloodhounds.

Fletcher Flora turns in “Handy Man,” an entertaining tale about Carey Regan, “handy man” (aka hit man) for Campan, a newly-powerful crime boss who sees Regan as his servant. They started off together, but now Campan’s the big man, so big that he no longer even needs his first name; he’s just “Campan.” Meanwhile Regan’s screwing Campan’s hot wife; he bridles when she bemoans that Regan will “never be more than a handy man.” Campan tasks Regan with killing the Swede, another crime boss. There’s a cool part where Regan sits alone in his apartment, not drinking or smoking or anything else, and lets the “coldness” take him over – then he drives over to the Swede’s place and guns down his prey and his henchman. Story ends just the way you expected it would, with Regan next killing off Campan himself and taking over his operation – “Just call me Regan,” he tells Campan’s widow.

“Killer” is a short first-person tale by William Logan; this one’s similar to “Handy Man” in that it’s about a professional killer. The narrator is tasked by his boss, Mr. Rose, to figure out the leak in the organization; Rose is certain it’s either our narrator or Charlie. Our narrator has a wife named Sue, who turns out to be screwing Charlie, who turns out to be the leak – instead of killing them himself, the narrator calls in Mr. Rose’s goons.

“Job With A Future” is by Richard Welles and is told in first-person present tense; it’s narrated by a 17 year-old who can’t find a job, and eventually gets paid driving the getaway car at robberies. But he’s shot during one, and the tale ends with him dying as he tries to escape.

“Shot” by Roy Carroll wraps up the issue; according to the Philsp site, Carroll was a pseudonym used by a few writers, one of them being Robert Turner. I’m betting this is his work, as the short tale is similar to those Turner collected in Shroud 9. So similar you wonder why this one wasn’t included. It concerns Renick, a regular dude who is shot while walking the crowded city streets, waiting for his wife. He stumbles around in a panic, not knowing who shot him or why; a guy comes up to help him, somehow knowing Rencik’s name. Turns out this is the man who shot him, a professional killer who complains that he actually missed with his silenced .45. Renick escapes him, but the hitman hurls a knife into his back; Renick dies on the city streets, just as a cop shows up. Turns out Renick’s wife was the one who hired the hitman. Cold!
Posted by Joe Kenney at 6:30 AM

MANHUNT is such a cool magazine. I wish it was as easy to find as those old Alfred Hitchcock magazines are. I've only found 2 issues in all my used bookstore wanderings over the years. Maybe one day they'll get re-issued in e-format like some of those old pulps do. I won't hold my breath though. Gil Brewer is one of my favorite writers in that genre. Awesome cover as well.

Kurt, MANHUNT is widely available at the pulp conventions like Pulpfest and Windy City. A few years ago I decided to rebuild my set at Windy City and in the next two days I found 39 of the 114 issues in the dealer's room. Prices were in the $10 to $12 range. I've had two complete sets over the years and still have one. I also found two of the cover paintings that were used as covers in 1956.

People gripe about the expense of attending conventions but believe me, if you are collector, then it's worth it.

You're absolutely right. I've wanted to go to those conventions for years and never have. I would be in pulp sensory overload.