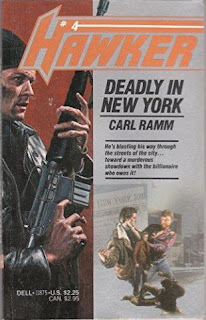 The fourth volume of Hawker had me experiencing déjà vu; it’s almost identical to The Specialist #8 in plot and even in some of the incidentals. In fact even the writing is similar at times. Randy Wayne White (aka “Carl Ramm”) even injects a bit of metaphysical stuff here, sort of like something John Shirley might’ve done on that other series, giving Deadly In New York a bit of a different vibe than the norm.

I’m missing volumes 2 and 3, but this one has hero James Hawker’s new role as personal troubleshooter for billionaire Jacob Hayes firmly intact; this relationship was arranged in the first volume. Also this one proves that Hayes’s Butler, a British guy named Hendricks, is important in his own right to the series; while the first volume had Hawker solo, this one seems to indicate that Hayes and Hendricks (why all the Hs??) also take part in the heavy lifting. At least they do for this assignment, which has Hayes tasking Hawker with taking down Blake Fister, owner of Fister Corp out of New York – a despot with a shady past who is looking to control the world one city block at a time.

Word has it that Fister’s goons – hired out of the ranks of the Mafia – are roughing up the residents in a certain no man’s land area of Manhattan, and Hayes wants Hawker to go there, pose as a new resident, and take care of them. This is of course exactly what happened in The Specialist #8, but White doesn’t spend as much time on it…instead, we have subplots featuring Hayes and Hendricks pursuing their own objectives. In fact, it seems to me that Deadly In New York was a bit sloppy in the plot department, as some elements and characters are heavily built up, only to disappear.

The opening is proof of the inordinate setup that recurs throughout the novel; a long sequence from the perspective of French contract killer Renard, here in Little Cayman island to kill Hawker. Renard’s been hired by the Fister Corp and it just goes on and on as he plots the death of his prey (complete with Renard screwing a silencer on his .38 revolver!). But Hawker of course gets the better of him – and not just Hawker, but Hayes and Hendricks are also there, and they toss a scorpionfish at the French killer, a fish that’s incredibly poisonous and can kill with a single touch, etc. They brutally leave Renard along the shore to die; he’s too weak to move, and if the poison doesn’t kill him the water will drown him. Only little do they know Renard actually lives, and is saved by the hotel owner.

Meanwhile our trio splits up – Hawker to New York, Hayes to Grand Cayman, and Hendricks to London. Hawker’s portion takes the brunt of the narrative and first has him hooking up with Dirty Harry-esque Detective Cahill of the NYPD, who is like the lone justice in a crime-ridden district of the city. This guy is given his own inordinate setup and indeed he is made to appear as if he’ll be a big player in the book, only to abruptly drop out of the story. But he knows of Hawker from a fellow cop, one who helped our hero in a previous novel, and thus turns a blind eye to Hawker’s arrival – even helping Hawker steer clear of any charges from killing off a handful of Fister thugs who set in on him immediately upon his arrival in New York.

The major action setpiece has Hawker staging a one-man raid on a three-story warehouse along the waterfront that’s filled with Fister Corp enforcers, drug-soaring freaks who were considered so crazy and dangerous that they were kicked out of the Mafia! But sadly White does little to grasp the exploitative material. They prove to be just your common everyday thugs, not even proving much of a struggle for Hawker during the long action sequence, which sees him sneaking into the building, killing quiety and then on full auto, and eventually blasting the place with plastique. The gore isn’t too extraordinary here, even though Hawker blows away a whole bunch of them.

Meanwhile Hendricks is looking up old WWII pals in London, and all this initially seems so arbitrary, particularly Hendricks’s questions about “the Druid,” a rumored top-level British intelligence operative who was really an undercover Nazi. Eventually these two plots will coalasce in an admittedly hard-to-buy fashion; for all that, Hendricks does kill a punk rocker/wanna-be hitman with a long needle to the brain. Another thing that melds the three separate subplots is a New Agey sort of vibe; both Hawker and Hendricks randomly flash on Jacob Hayes being in trouble, thoughts which come out of nowhere and serve to trouble them. Eventually they’ll learn that Hayes, who has studied Zen, mentally sent them this alert!

Then Hawker finds out from Cahill that Hayes has been reported as abducted, back in Grand Cayman. Cahill actually calls Hawker out of bed – he’s gotten busy, in somewhat graphic fashion, with the sexy German babe who owns the building Hawker’s been staying in. A woman Hawker saved from Renard, the French hitman who ended up trailing Hawker back to New York. This sequence sees Renard posing as someone Hawker knows, and trying to force our hero to eat a cake laced with the poison of a scorpionfish(!?); Hawker ends up mashing the cake down Renard’s throat, and this time the Frenchman does us the favor of offing himself.

The finale sees Hawker and Hendricks in Grand Cayman, Hendricks using his training in Zen and whatnot to metaphysically grok where Hayes was taken to! And he succeeds! The rushed finale has them staging a two-man raid on the compound of Blake Fister, who turns out to be an old Nazi under a new name. Hawker and Hendricks are armed with Thompson submachine guns, and trade appropriate action movie quips, but it’s a bit lacking on the excitement scale, especially given that Fister doesn’t appear to have too many men patrolling the compound. Justice is served and Hayes is saved, but the novel ends with the revelation that Hayes is dying.

Overall Deadly In New York is fairly entertaining and is for the most part well written, though as mentioned some of the stuff that’s heavily built up is dropped too quickly. I mean, the reader is almost certain that Hawker and Detecive Cahill are going to team up and take out tons of goons together, but it never happens – instead Cahill, who has been given his own action movie sort of intro, basically just serves to keep Hawker out of trouble. Same too is the German babe perfunctorily removed from the tale; she bangs Hawker and begs for him to take her along to Grand Cayman, but he gives her a few smart-ass remarks and takes off.
Posted by Joe Kenney at 6:30 AM

This was the least of the Hawker novels I've read. The wobbly "suddenly we're psychic" plot development seemed to simply reveal an author hard up against a deadline.

Much better were Houston Attack, with a plot to addict America to drugs through fast food, and Florida Firefight, with a number of scenes you'd swear on a stack of Dolph Lundgren DVDs were drawn directly from 1980's action movies. Seriously. The hero goes on a midnight raid of the villain's warehouse headquarters, gets detected, blows up a van and shoots bad guys off a catwalk while the beautiful heroine gets her shirt ripped off. Classic.

Thanks for the comment! Being up against a hard deadline might be the only explanation for much of Deadly in New York. I don't think I have Houston Attack, but that sounds like a bonkers plot. Someone also mentioned a sleazy-sounding installment that takes place in Detroit, I think -- something about a snuff film ring or something crazy like that. Surprisingly it looks like these books are now available in Kindle editions under White's real name.

The book I described as having an epic 80's action movie vibe was not Florida Firefight (which is still a pretty good book) but Chicago Assault.

I have all the Hawkers and am working my way through them slowly.
They're fast and fun, but my favorite in the Men's Action/Adventure genre remains Fargo by John Benteen/Ben Haas.