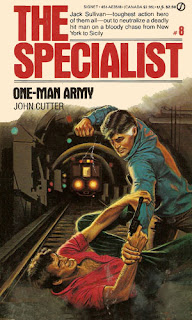 Jack Sullivan is back to kick some ass in the eighth installment of John Shirley’s The Specialist, which is easily my favorite one yet – Shirley has clearly gotten more comfortable writing straight action-adventure, and he even indulges in a bit of horror fiction this time, which adds a nice and unexpected touch to One-Man Army.

Similar to mid-‘80s action movies like Death Wish 3, this one has Jack “The Specialist” Sullivan moving into an apartment building to defend the tenants against the gang-bangers who are terrorizing them. Sullivan is in total superhero mode this time out; this guy is by far the most superheroic of all ‘80s men’s adventure protagonists, even though Shirley does a capable job of making him seem relatively human. But damn, Sullivan’s the dude Mack Bolan would call if he needed help!

Still mulling over the offer he was made last volume to head up a covert strike force for the government, Sullivan heads back to New York to help out an old flame named Bonnie, a hotstuff private eye who has gotten deep in it on her latest case. Hired by the tenants of a brownstone on the Upper East Side, Bonnie’s learned that the landlord, a crime syndicate-type named Legion (who has a penchant for taking out his glass eye and polishing it in front of his hechmen), is trying to clear out the building, raze it, and turn it into some sort of lucrative heroin-importing deal or somesuch.

After engaging Bonnie in one of Shirley’s enjoyably-hardcore sex scenes, Sullivan poses as the latest tenant and moves in. Here the fun begins; each volume of The Specialist has become more and more fun, with Sullivan the godlike figure of justice kicking evil’s ass in heroic fashion. This opening sequence is much in the Cannon Films mode, with scarred, battle-hardened, massively-muscled Sullivan moving in with the cowardly tenants – and promptly kicking the ass of the street punks Legion has hired. Given Bonnie’s “no killing” stipulation, Sullivan is relegated to using his fists, though when necessary he whips out a .44 Automag and blows a few of ‘em away in gory splendor.

As with the previous volume, One-Man Army is pretty single-minded in its sole plotline, of Legion sending more and more goons to the brownstone, either for them to disappear, get arrested, or come back in pieces. And again Sullivan demonstrates his Batman-like powers, his deadly skills so legendary in the underworld that gangsters nearly piss themselves at mention of “The Specialist.” This time though Shirley varies up the plot a bit with Tony “The Chill” Fabrizzio, a professional assassin with untold kills whom Legion hires to take out Sullivan.

Unfortunately Fabrizzio isn’t very interesting, and turns out to be the cliched pulp hitman. When Sullivan, more so due to his own innate sense of security than anything conscious, manages to avoid Fabrizzio’s attempted hits, the hitman turns coward and tries to run away. It gets even more Death Wish-esque when Bonnie is the one who gets hurt, Fabrizzio firing a grenade into Sullivan’s room in the brownstone. Surprisingly she doesn’t die, though she’s in the hospital the rest of the novel.

This of course only serves to make Sullivan even more consumed with vengeance. Desperate to find Fabrizzio and make him pay, Sullivan tears up Legion’s army of punks and gangsters. We get a great sequence where Sullivan hops into his armored van with its missile launcher and drives up an abandoned five-story parking structure in Queens, encountering a new booby trap on each level. Even though this sequence ends with Sullivan’s van destroyed, it’s still a helluva lot of fun.

Even better is the next sequence, which features the horror element mentioned above. In the highlight of the entire book, Sullivan chases Fabrizzio into the abandoned, grimy tunnels beneath the New York subway system. But it’s a setup; Legion’s henchman Crackwell has hired the Precious Ones, a gang of Satanic punks who live beneath the surface, to kill both Fabrizzio and Sullivan. The Precious Ones lurk in the rat-infested subway tunnels, and first they capture Fabrizzio – who in his panicked state thinks they’re the zombies of his victims – using him to lure in Sullivan.

This is pure pulp action-horror, with the Precious Ones mutant freaks (Shirley casually drops the tidbit that many of them are insane asylum escapees) who worship Satan and like to drop their victims into a pit of giant rats who eat people down to the bone. One of them’s even an “albino Negro,” like that scary-as-hell dude in The Omega Man. Sullivan, who thinks of them as “subway trolls,” takes them on with Automag and shotgun, massacring them, but he’s still caught – and almost thrown in the rat pit. But without surprise he manages to escape – and then he’s killing the rest of them with friggin’ ninja throwing stars!! This is the best sequence yet in the entire series, complete with Sullivan yelling “I’ve always wanted to meet Satan!” as he jumps into the rat pit.*

But after this craziness, the novel sort of drifts along to an unspectacular finale. Legion has escaped to Sicily, and Sullivan trails him there, but we get a lot of page-filler about him buying guns from an arms dealer and scoping out the villa Legion’s staying in. And even worse, Sullivan doesn’t even get to kill Legion here, instead just taking out a few Mafia thugs and then hiding on the airplane Legion hires to take him back to New York. The finale is at least memorable, with Sullivan chaining Legion up in the cellar of one of Legion’s tenements in Harlem, a place in total disrepair with a broken furnace Legion has refused to fix; the villain ends up freezing to death, while meanwhile Sullivan and an all-better-now Bonnie head off to Hawaii for a quick vacation!

*I wonder if the Precious Ones were inspired by the titular subway-lurking creatures in Robert Craig’s 1982 horror paperback Creepers.
Posted by Joe Kenney at 6:30 AM

One of my pet peeves with adventure stories (except sword-and sorcery ones, and I guess even including some of THOSE) is that countless ones not only give the hero an "everyman" look, but go overboard with it, including the build. I guess the makers can't resist the "David and Goliath" idea of pitting someone like that AGAINST someone very big, a whole lot of times, but for me that idea wears thin. In fact, there seems to be almost an unwritten rule that only a VILLAIN gets to be VERY powerfully-built (like that character in "Policewomen" that you mention below). So that physical description of the Sullivan character was enough to surprise me.