The Spider #19: Slaves Of The Crime Master 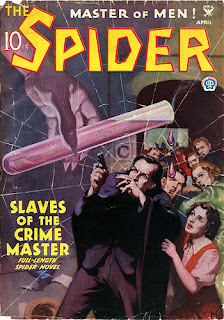 The Spider #19: Slaves Of The Crime Master, by Grant Stockbridge
April, 1935  Popular Publications

This installment of The Spider appears to have been a reaction to the radio show of rival pulp magazine The Shadow, which is interesting, as this was published well before that show became what it would eventually be remembered for – ie, pulp-crime tales about Lamont Cranston and his ability to “cloud men’s minds.” (Orson Welles of course is my favorite Cranston of them all.) At this point the program was just hosted by a figure calling himself “The Shadow,” I believe, yet it was a big hit, and as mentioned clearly seems to have inspired some of the incidentals of Slaves Of The Crime Master.

But otherwise this one’s a little tough going, Norvell “Grant Stockbridge” Page once again pulling all sorts of page-filling tricks to meet his inhuman monthly word count. At least I didn’t enjoy it as much as some of the previous/later ones I’ve read. Richard “The Spider” Wentworth’s enemy this time is “The Tempter” (Wentworth’s own name for him, per usual), a mysterious individual who is corrupting the minds of the nation’s youth, turning them into pillaging gangs of criminals. Page at times hits the vibe of the juvenile delinquent pulp of two decades later, though per the normal Spider template this “jaydee” stuff only comes and goes.

In reality this installment turns out to be Wentworth staging a series “lightning strikes” against various underworld bosses, killing them without his standard .45s due to a vow he has made to not use guns this time. The Tempter stuff is forgotten for long periods, and for that matter the villain isn’t the usual costumed/masked menace of the norm. Broadcasting somehow over the radio from some unknown location, the Tempter uses his dulcet tones to twist the minds of eager-listening youth; there’s even a rock ‘n’ roll vibe here, with the Tempter like some non-singing ‘30s version of Elvis or something.

To fight this menace, the Spider will eventually begin broadcasting his own radio messages, urging youth to resist the lure of the Tempter and to do good for others and whatnot. As I say, one can’t help feel this is all a reaction to the Shadow radio program. Wentworth even goes to the trouble of recording several broadcasts for pal/enemy Commissioner Kirkpatrick to hand over to radio stations, though Page doesn’t really elaborate how Wentworth actually accomplishes this – this was in the days when making an audio recording was a complex process. Soon there will be gangs of “Spiders” cruising the streets, young boys and girls inspired by the Spider’s words, though they are still outmatched by the roving bands of the Tempter’s flock.

Page as usual opens on the action, as Wentworth, in his Spider guise, takes out a few crooks and hangs their corpses as warnings to others. Wentworth actually spends a good portion of the narrative in the Spider disguise, which is a nice change from the past books, where he dispensed with the outfit after the first few pages. Also, looks like the “Tito Caliepi” name for this disguise has been dropped – in the earliest books we were informed that this twisted, old face and slouch hat were part of an alternate identity Wentworth appropriated, named Tito Caliepi. Now this look has become “the” Spider look, and it’s solely referred to as such.

Another recurring part of the template is Page will have Wentworth up against it and then just proceed to throw more and more proverbial rocks at him. So in the opening after fighting off some kid-gangs and killing those two thugs, Wentworth is surrounded by cops – and these are ‘30s cops, so they’re shooting on sight. (No stand down orders for these guys, folks…them were the days…) Wentworth, who has sworn never to kill cops (again, them were the days…) escapes, managing to steal a patrol car, with the “coppers” in pursuit – and he almost runs over a panicking woman carrying a baby. She pleads for a lift. Wentworth tells her to get in – why the hell not? So the baby is comatose or dying and the cops are surrounding him and the woman’s screaming, and with his lips the usual “thin line” of focus Wentworth tears through the streets of New York for the nearest hospital.

Only to be informed by a doctor – Wentworth having dropped his Spider guise along the way, incidentally – that the baby will likely die anyway…! Welcome to 1930s pulp, friends, where no one is safe. Here Page apparently decides his “jaydee menace” storyline isn’t sufficient for an entire book, so breaks out this “infantile paralysis” subplot; babies around the country are abruptly falling ill, going into seizures and comas from which they do not recover, even if they are placed on artificial life support. Not to sound like a snowflake, but what with having a six-month old and all at the time I was reading the book, this part didn’t sit too well with me…I guess that’s the power of good pulp, though – it can affect you decades after it was published.

Wentworth goes through the usual assortment of red herrings in his research; he’s certain the Tempter must be someone who makes his living as a radio announcer, and has Kirkpatrick round up the most famous personalities in the city for a voice evaluation that’s more of a psych test. Orson Welles, if he’d been famous at this time, would’ve been a shoo-in, I’m sure. Now that guy had a voice. Later, for no reason at all (other than page-filling), Wentworth visits old Professor Brownlee upstate – only to find some thugs attempting to abduct him. Leading the crew is a guy with a horribly-scarred face, as if all his features have been burned off; Wentworth, with his usual gift for instant name-coining, begins to refer to him as “The Faceless One.”

Wentworth’s knocked out, almost killed in a house fire (a long, interminable sequence features his nail-biting escape), and Brownlee’s snatched after all. Eventually we’ll learn that the Faceless One, a scientist of sorts, is the man behind the infantile paralysis plot, and also is cooking up an antidote to sell off to the highest bidders. He even keeps kids in cages as guinea pigs! Temporarily it’s back to the kid-gang stuff, and in another action scene Wentworth, again as the Spider, shoots down a would-be killer…only to see, to his horror, that he’s just blown away a 15 year-old! Wentworth, crying, vows to no longer use his guns until this caper is finished – he doesn’t want to kill anymore kids.

Now the book heads into the arbitrary-seeming subplot of Wentworth taking out a variety of criminal underbosses, usually stating his challenge in the paper so as to draw large crowds and killing the villain in as audacious manner as possible. A few times Kirkpatrick has the opportunity to shoot down the Spider, but does not, given that he knows it is his “best friend” Richard Wentworth – it is made clear, once again, that the fact Wentworth is the Spider is an open secret between the two. So as to keep Kirkpatrick from being roasted by the public – who as usual blames the Spider for everything (fake news!!) – Wentworth slaps him around and starts a fight with him! End result: Kirkpatrick is out for the Spider’s blood, Richard Wentworth or not.

It just sort of drifts along, hitting all the template points right to a T; I mean, Nita van Sloan is kidnapped right on schedule. This time she’s degraded a bit more than usual, with the Faceless One stripping her down to her slip and tying her to an arm-ripping mechanism patterned after one used in the Inquisition or somesuch. We see this horrible contraption in action, later on, with some gangster moll’s arms getting ripped off by it. Wentworth, again as the Spider, manages to save Nita in the nick of time, taking us into the climax – and also highlighting a bit of a problem with the book overall.

Clearly winging it to a deadline, Page several times throughout has Wentworth disappearing from the narrative, then arriving miraculously and detailing where he’s been and what he’s been doing in the baldest of exposition. This happens not only here but in the final pages, as Wentworth explains all the crazy shit that’s happened – and folks, this one features the craziest finale yet. Taking place at “the Yankee stadium,” it sees a crowd of kids about to be infected with infantile paralysis via poisoned food, as well as all the red-herring Tempter-possibles being in attendance (one of ‘em being the real one). And then a giant spider descends into the fray, the Spider’s voice booming out and announcing that he’s about to kill the real Tempter.

Page stretches this out until it’s past the breaking point. The spider-thing keeps getting lower and lower and the crowd keeps gasping and Kirkpatrick keeps sweating bullets. Meanwhile there’s a corpse on the thing – Wentworth having offed a major character in another of those off-page scenes he exposits about later – and Wentworth unmasks the true Tempter in a typically-harried finale. And then explains everything that just happened to a nonplussed Nita. But hey, at least Wentworth and Kirkpatrick are best buds again!

This one wasn’t my favorite…it wasn’t bad, but it wasn’t great.
Posted by Joe Kenney at 6:30 AM