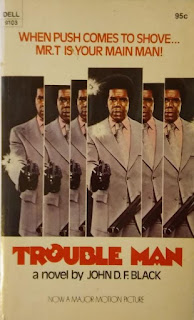 If Trouble Man is remembered for anything these days, it’s likely just the super-funky soundtrack Marvin Gaye produced for it. Otherwise it appears the movie is one of the more forgotten Blaxploitation action pictures of the day, certainly not as well-remembered as Shaft, a movie for which author John D.F. Black also wrote the script.

Black, a white screenwriter who served as a producer for Star Trek during its original run and who wrote scripts for Mission: Impossible, Mannix, and other ‘60s-‘80s shows, produced Trouble Man and wrote the script for it. He also turned in this novelization, which appears to be scarce these days, and also appears to be the only novel Black published – per IMDB.com, it looks like Black’s last credit was a Murder, She Wrote episode he scripted in 1987, though it appears he’s still alive.

This is an interesting novelization to say the least. Black practically drops you right into protagonist Mr. T’s psyche; the novel is related in first-person present tense, with the reader enmeshed in T’s thoughts, giving the book more of the feeling of a literary affair than the average movie tie-in. The novel is filled with ellipsis overload, approaching a stream-of-conscious vibe as T becomes involved in this latest case. There’s no real intro or description of the guy, but he is the expected superbad stud of Blaxploitation, one who drives a brand new Mark IV around the streets of Los Angeles. He has a private eye license as well as a license to carry a gun, and he has an office in the back of pal Jimmy’s poolroom.

The novel (and movie) concerns Mr. T being hired by a white-black duo who run illegal craps games around LA: Chalky (the black one), and Pete (the white one). A group of thugs in ski masks and sunglasses have been knocking over these games, and the duo want T to find out who is behind it. After much dithering – T don’t take no shit from no one, especially when it comes to his fee – they agree that T will get ten thousand bucks for the job.

At least, that’s the plot. But the scattered way Black writes the novel makes it occasionally hard for the reader to understand what the hell is going on. I mean, this is the sort of thing the reader is faced with on every single page:

Left my damn window open…wet on the sweet smelling leather seat…fuck it, it’s last night’s suit. Brittle chick…like a thin sheet of window glass…but she doesn’t break…weird…she won’t ever break, that woman. Put a tape on…nothing on the radio but cats playing night music in the daytime or half-ass dudes trying to be funny and selling garbage nobody needs. Pretension…play some Oscar…easy…like the fog with the sun fighting it to see who wins and stays. Chick won’t ever know what she’s missing, hating mornings…brittle chick that won’t break…damn…where are the car keys?

T when we meet him is in some babe’s bed (ie the “brittle chick” above), but he has a steady gal – Cleo, a singer who turns down an opportunity in Chicago because it means she’d be going without T for a few weeks. Otherwise she’s there in her apartment to make T breakfast, run his showers, and provide him with some good lovin’. The two have a sex scene…at least I think they do:

The occasional action scenes, most of them toward the climax of the book, are just as scattered:

There was a dude, Frank…outside the sliding glass doors to the terrace, baby…gunman…at the wall…sees me…can’t let him swing that shotgun toward me…got to burn him…bullet picked him up and threw him through one of the glass panels…messy as hell, man…cat looked like he was flying, baby…all right…let’s get it on…

In case you haven’t figured it out yet, folks, Mr. T is cool.  And he goes out of his way to prove it to us in the novel.  To the point where you start to wonder about the guy.

This striving for “coolness” overclouds the narrative to the point of density…a big issue with Trouble Man is that none of the other characters get a chance to breathe. Cleo is less than a cipher, a sexy chick “with no bitch in her” who is literally just there to have sex with T and then leaves town when he tells her to. Sidekick Jimmy fares a bit better, in that we learn he has a gift for comeback lines. But T’s psyche swamps the novel, to the point where, as displayed, even the action scenes come off like William Burroughs collaborating with Iceberg Slim. I would’ve given anything to read a simple sentence like, “T fired the shotgun and the thug’s guts splattered on the wall.”

The book is faithful to the movie, which is to be expected given the author. T soon finds himself set up for the killing of Abbie Walsh, a soldier for black crime boss Big. Later T is also framed for the murder of Big – if you’ve never seen the movie, just check out the song titles of Marvin Gaye’s score, as they give away all of these plot points. (But good grief is the track “T Plays It Cool” as badass as can be.) T also has run-ins with Captain Marx of the LAPD, who disbelieves T’s cover stories and vows to bust him.

The climax sees quickly (and hazily) rendered action scenes: T has Cleo and Jimmy clear town, and some of the major players are taken out in a few pages…T shoots some of them and you don’t even realize they’re dead till later, because we read stuff like, “Squeeze [the trigger], T…take Chi out…gone…” And by the way, “gone” means Chi is now dead! Right on, baby…!

Mr. T tries not to kill any poor fools in the finale, which sees him staging a one-man assault on the downtown office building owned by main villain Pete; T goes out of his way to just knock most of ‘em unconscious. T here is armed with some pistols he’s stolen from a police evidnece room (in a too-drawn-out sequence): a .38 and a .45. He uses these to dish out some bloodless violence as he closes in on Pete, who is locked in a room at the top of his building; Black is not one to dwell on the gore (or even the action, for that matter).

Indeed, it’s T’s returning of the pistols to the evidence room that serves for the gripping finale…and Mr. T picks up some hot black lady cop who is new at the precinct, driving off into the sunset with her. So much for Cleo, baby! Black almost appears to be in a hurry to tell the tale, which comes in at 171 pages of fairly big print. But T’s overbearing presence serves to hamper the forward momentum, making the novel seem longer.

I’m not sure how I’d rank Trouble Man. I mean it’s weird, for sure – there can’t be too many Blaxploitation novelizations like this one. And yet that otherness makes it seem kind of special. At the very least, it made me want to listen to the soundtrack again for the first time in years – and also made me bummed out that I’ve yet to get it on vinyl.
Posted by Joe Kenney at 6:30 AM

Just recently caught this movie on TCM. It's fun and a cut above most of the blaxploitation I've seen (which is not an insignificant amount). That novelization style would drive me crazy though, I fear!