Ladies Of The Valley (aka Dirty Movies) 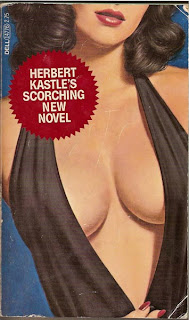 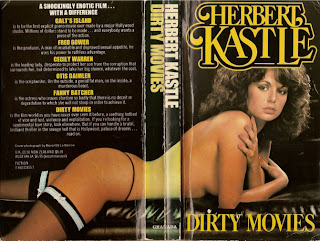 Sounds great! I've acquired a taste for trash fiction, helped along by The Movie Set by June Flaum Singer. That one had people aspiring to be like the old Hollywood greats, but with seamy trainwreck lives. Awesome stuff.

Karla, thanks for your comment. The book definitely is great and I look forward to reading more of Kastle's novels. Also, thanks for the tip on The Movie Set! I was looking up info on it and discovered your blog -- I love it! I've never actually read a romance novel, unless you want to count "The Pagan Princess" by Laura Buchanan (aka Florence King), which was "in the tradition of" Rosemary Rogers's "Sweet Savage Love." But there seems to be some overlap between romance and the '70s/'80s trash fiction...I know Rosemary Rogers herself penned two definite trash fiction novels: The Crowd Pleasers and The Insiders, both of which I hope to read sometime.

Joe, great review. If you have read American Psycho how would you compare its depiction of NYC / Capitalist Corporate Megalomania with LotV's depiction of the Hollywood scene? Because as soon as I started reading this review, especially the "everyone in this book is a slimeball" aspect you mentioned, that's the first book that popped into my head as a comparison.

Jack, good question! I read American Psycho a year or two after it came out, when I was still in high school, so my memory of it is a little sketchy. About all I recall is the part with the ratt. But if my memory serves, American Psycho has more in common with "Boy Wonder" in that it's OTT to the point of lunacy. ("Boy Wonder" after all is the only novel I can think of which features self-decapitation via chainsaw.)

Ladies of the Valley is more deadpan. Also, the slimeballs ARE slimeballs, but Kastle has a gift for so getting into their heads that their actions don't seem so disgusting...that is, until you think about it!

Oh, man, I love Herbert Kastle. If you ever get a chance, read Cross Country. It is intense and nasty throughout. The movie's got nothing on it. It's not possible, as it is merely an R-rated movie. I don't know why Kastle wasn't a bigger deal.

Consider me another Herbert Kastle convert. I finished Ladies of the Valley over the weekend and can't wait to read more of his books. (I kind of banked on becoming a fan after reading your reviews of his books and bought copies of Cross-Country, Millionaires and, just last week, The Movie Maker.) I agree that he has a gift for making the reader empathize with his characters -- up to a point. Sometimes the switch is sudden. You'll be on a character's side and--whoops! He's an unapologetic racist. (I don't think I was ever on pervy producer Fred Gower's side, though.) Other characters were harder to dismiss, no matter how terrible they were. It was telling that it was easier to sympathize with the serial killing screenwriter than any of the movie producers.

I agree with your comparison with Day of the Locust. Like Jack, I also thought of Bret Easton Ellis (didn't read American Psycho, but I did read Less Than Zero, which also has an "everyone's a slimeball" vibe). Except Ellis' writing leaves me cold. Kastle's characters, terrible though they may be, had souls. Wretched, dark, rotting souls.

Though I wish I discovered Kastle sooner I'm glad I know about him now. Thanks!

John, these are my favorite kinds of comments -- it makes me very happy when someone enjoys a novel as much as I did. Thanks! Your comment is also timely because I've been meaning to read another Kastle book. I'm leaning toward one of his '60s Gold Medal novels, either Hot Prowl or Countdown To Murder.

What's interesting is that every Kastle book I've read features basically unlikable characters. Harlan Ellison was friends with Kastle and in "The Harlan Ellison Hornbook" he devotes an entire chapter to him. Apparently Kastle himself was a conflicted person, with impulses he couldn't control or understand, and even though he achieved his lifelong dream of being a famous and wealthy writer, he never really liked himself. He also became fanatically obsessed with a young woman, breaking up a decades-long marraige for her, something he wrote an entire novel about, "Ellie." Ellison noted that Kastle usually identified with the more screwed up characters in his novels. At one point Google Books had this entire chapter of the Hornbook available for viewing online, but they've since locked it down.

Another interesting thing about "Ladies From The Valley" -- I wonder if Kastle was writing some of that stuff from things he'd seen in Hollywood. The stuff with Fred Gower drugging and filming women eerily mimics real-life Hollywood producer Roy Radin, who would apparently do the same thing; it all came out with "Welcome Back Kotter" actress Melonie Haller, who claimed she'd been drugged and filmed by Radin. (You can read about that here and about Roy Radin here.)

What's crazy is how it all parallels what Kastle wrote -- and it's even crazier because the Radin stuff was occurring at the same time "Ladies of the Valley" was being written and published. It makes me wonder if Kastle was aware of Radin, etc, or if this was just another example of art imitating life. Even crazier is how Radin suffered such a gruesome end, same as Fred Gower.

Just finished reading this astonishingly nihilistic novel in its UK edition, under the title DIRTY MOVIES. But it ends very abruptly, as if a page had been accidentally removed. The final sentence is "I shot him in cold blood. Now that some time has passed, I've had thoughts..." Does the US edition end this way?