I was three years old when Star Wars was released in 1977, so seeing it is probably one of my earliest memories. Coincidentally, the first time I saw the movie was in a drive-in theater in Lavale, Marylad. As I recall our speaker wasn't working, and a kindly older couple in the next car gave us theirs.

Like any other kid my age I was obsessed with Star Wars and collected all the toys and anticipated the next two movies with a near-religious awe. But in the years after Return of the Jedi, I lost my interest and moved on to more "adult" stuff. The world of Star Wars no longer held any special appeal to me. Then the damnable "prequels" came out, and any love I once held for the franchise was eradicated, so that I am now one of the few people who will admit: I hate Star Wars.

But I don't hate this! War Of The Stars is a fan project I discovered last year. An entire movement has developed around the Star Wars universe in which devoted fans edit together their own versions of the films. This is the only one I've watched and probably ever will watch. In an opposite approach to George Lucas's misguided efforts in the late '90s, where he "updated" the original trilogy by adding a bunch of bullshit cgi, "The Man in Black" has gone the other way and made the original Star Wars look like some grindhouse film, churned out on pisspoor filmstock.

Using an old 16mm print of Star Wars, The Man in Black recuts the film, jettisoning incidental stuff here and there and inserting behind-the-scenes material and outtakes. Gone too is most of the score we know so well, replaced with a more appropriate grindhouse soundtrack. And another big addition is a healthy amount of gore, digitally added to the battle scenes: 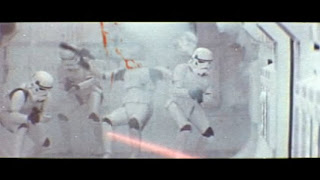 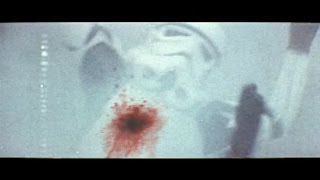 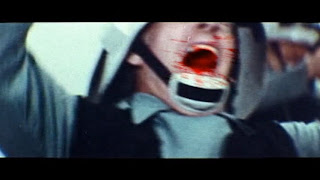 The Man in Black adds more low-budget effects to further camp up the film. For one, Darth Vader's eyes now glow red when he uses the Force: 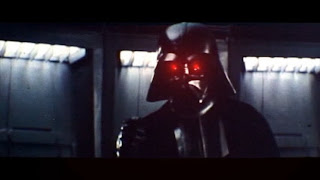 Another cool edit is the memorable scene where Luke discovers the charred remains of his aunt and uncle. The Man in Black works some magic here, employing Judas Priest of all things on the soundtrack, and adding cool psychedelic effects as Luke sees his departed aunt and uncle in the twin suns of Tatoine: 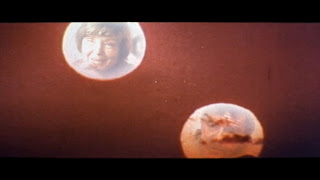 Another (sometimes) funny addition is the occasional subtitle for R2-D2's chirps: 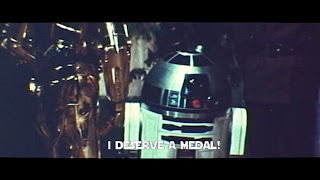 I think my favorite added bit is a behind-the-scenes moment where Carrie Fisher hands Mark Hammil a beer; The Man In Black inserts this perfectly before the climatic X-Wing attack on the Death Star. 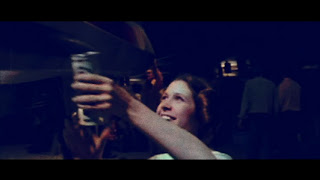 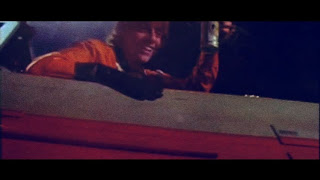 This climatic battle by the way has one of the more inspired moments in this fan edit; Darth Vader controls Luke's mind as he chases behind him in the trenches of the Death Star. In War Of The Stars, it's Luke who blasts apart his old pal Biggs, not Darth Vader -- given special irony here because, of course, The Man In Black includes that deleted footage, earlier in the film, of Biggs and Luke talking back on Tatooine.
We also get more goofy outtake material in the end, complete with Harrison Ford biting on his medal: 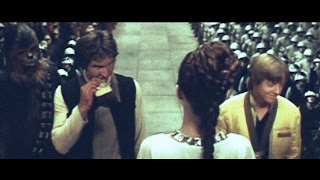 This is a fun, new look at an old classic, but one with an inherent problem: Star Wars could never look like a grindhouse film. No matter how much deleted material you insert, how cruddy you make the filmstock appear, you can still tell that this was a major production, one which benefited from a serious budget. But still, making such a production seem low-budget is part of the fun.

And yes, Han fires first in this edit. The way it's supposed to be.
Posted by Joe Kenney at 8:17 AM

Hey TMIB's Vimeo got nuked and I've only just discovered his work and would love to see this do you know of an updated link where I can watch and/or download the film?