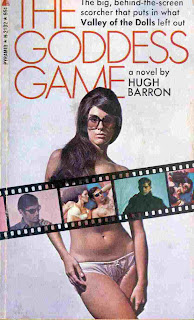 Between 1967 and 1971 Burt Hirschfeld published a handful of novels under the psuedonym Hugh Barron (with a final novel, Special People, published in the UK only in 1978). Each of the Hugh Barron books were "in the tradition of"-type novels, the "tradition" in question usually being "Harold Robbins."

Hirschfeld's 1969 novel The Goddess Game however is "in the tradition of" Jacqueline Susann's Valley of the Dolls -- so much so that Pyramid Books even references Susann's novel on the cover. (Incidentally, the cover of the Pyramid edition of The Goddess Game, shown here, is by far my favorite of all the Burt Hirschfeld/Hugh Barron novels: taken by photographer Lester Krauss, the shots are almost like stills from an imaginary film based on the novel, one redolent with the groovy, swingadelic vibe of the time -- and The Goddess Game would've made for one helluva groovy, swingadelic movie.) 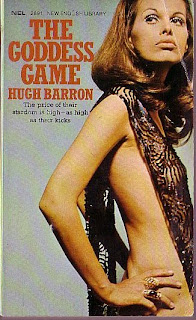 And a bonus cover -- in 1985 Dell Books reprinted the Hugh Barron novels under Hirschfeld's own name. I have to say, though: none of these cover models really fit my description of a "goddess!" 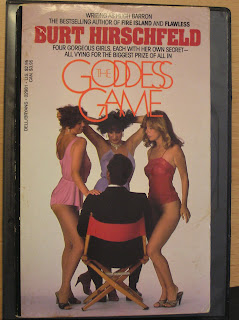 Great analysis, Joe. Makes me want to revisit the novel. Hirschfeld would sure be proud.

Martin, thanks for the comment! I think my next Hirschfeld/Barron will be "Tilt." Sounds like his take on the psychedlic era/Aquarian Age, and definitely looks pretty cool.