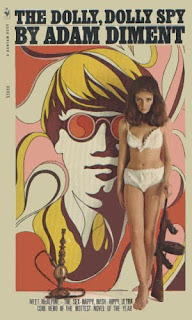 The Dolly, Dolly Spy by Adam Diment
July, 1968 Bantam Books
(Original UK publication October, 1967)
I'm surprised I've only now discovered the work of Adam Diment, who, starting in the late '60s, published four novels about the exploits of a dopesmoking sort of anti-007, Philip McAlpine. Diment proved to be similar to his protagonist, and the press hyped him accordingly -- a 24 year-old British youth who listened to rock, smoked dope, and surrounded himself with a bevy of miniskirted London "birds." Indeed, the media coverage made Diment seem more outlandish than his hash-loving secret agent of a protagonist.
As a guy who spent a semester of college in Holland, I can assure you that dope and physical violence are an impossible combination -- and it's something Diment too knows, as his hero Philip McAlpine only relaxes with a bit of hash here and there in The Dolly, Dolly Spy, the first of the four novels. As usual, the media and the back-cover blurbs oversell McAlpine's drug life; the novel is more of a parody of the spy genre, with an overly-arch narrator who does his best to kill all of the escapism one would expect of a James Bond-type of world. The idea here is moreso of a Swinging London-type who is manipulated into the world of international espionage, rather than a drug-fueled satire on the genre, a la Michael Moorcock's Jerry Cornelius material.

The Dolly, Dolly Spy is more of an introduction to the series than a straight-up novel. It concerns itself mostly with how McAlpine is recruited into this world. Actually he's instead blackmailed into the world -- during a raid on his place a brick of newly-bought hashish is discovered. The person who called the raid and now holds the hash is Rupert Quine, an overbearing gargoyle of a man who claims to head up CI-6, a subset of British Intelligence. Quine offers McAlpine a choice: either go to prison for the hash or work for CI-6.
The job, as Quine presents it, is too simple. McAlpine is to apply for a job with International Charter, Inc, a non-aligned sort of FedEx which acts as courier for all the world's Intelligence agencies and even the Mafia. They fly agents, documents, prisoners, the works, and all under the radar. Quine wants McAlpine to answer an innocuous ad in the newspaper to become a pilot for a small firm: the firm is International Charter, and Quine is certain that McAlpine, with his pilot's license, his devil-may-care attitude, and his general insubordinance will be a perfect fit for the role. At length McAlpine complies and, after a lenghty series of interviews -- all of which are relayed for us -- he is offered the position.
After some intensive pilot training in Texas, McAlpine is sent to a remote island named Dathos, off the coast of Greece. Here he flies various missions for International Charter, his commander a former Nazi Luftwaffe ace. McAlpine bides his time, occasionally going for "vacations" where he relays what he's learned to various CI-6 women who visit, posing as cousins or other relations (McAlpine is sure to inform us that these women are always unattractive and they always want to sleep with him -- he bets it's yet another twist of the knife courtesy Rupert Quine). But eventually he gets so used to his now-mundane life that McAlpine's girlfriend comes to stay with him in Dathos for some fun in the sun, Dylan on the turntable, and plenty of hash.
Soon Quine re-enters and McAlpine discovers why he's been infiltrated into International Charter: a mission comes up in which McAlpine is tasked with picking up three men and flying them to another destination. It develops that the leader of these men is Detmann, a former Nazi honcho who is described as "The Angel of Death." Quine orders McAlpine to pick up Detmann but instead deliver him to Quine's men rather than the designated drop-off point. After a US agent tries to keep McAlpine from taking the job, he knows he's lucked out: all he must do is sequester this Detmann somewhere and then make his demands to Quine -- he'll be rich and he'll be free.
The novel saves its action for the final half. At 154 pages, The Dolly, Dolly Spy is a quick read, but it's hampered by the narration. In short, McAlpine comes off as a total pisshead, bitching about things that have no bearing on the narrative at hand. Seriously, long sections of this novel are given over to digressions -- endless ones at that. (No doubt courtesy the dope Diment himself was smoking.) The climax however is appropriately thrilling, with McAlpine squaring off against Detmann, who comes off as a true James Bond-type villain. Anyway, the climax is thrilling if too short: Diment rushes through it and doesn't fully play out the potentials.
I've got the next three volumes and they appear to be more of the "psychedelic spy" sort of thing I expected. As for Adam Diment, these were the only four novels he published and they've gained a cult following; word is the man himself dropped out of the publishing world after 1971's Think Inc and never looked back.
Posted by Joe Kenney at 10:01 AM

Intriguing! I'll have to track these down.

Good luck...these four books have been grossly overpriced, especially the last one, Think Inc. I used to see it for around $4 a copy, but then it jumped up to around $40 or so. Damn vultures. But these things fluctuate, so you might be able to find it cheaper. Thanks for the comment!

Seems the whole swinging 60s novelist persona was a bit fake. His middle-aged agent kitted him out in the latest fashions to capitalise on the world's fascination with London.