The Penetrator #2: Blood On The Strip 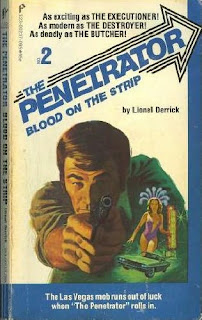 The Penetrator #2: Blood On The Strip, by Lionel Derrick
October, 1973 Pinnacle Books
The first Penetrator was a fun if passable tale firmly in the tradition of Don Pendleton: fast-moving with good crisp narrative and prose. This one is a lot more rough, downright inept at times, with lame dialog, poor characterization, and laughable "plot" developments. But at the same time, it's much more lurid than The Target Is H, coming off like The Sharpshooter, with gleefully-described gore and all sorts of perversion. The difference in style is easily explained: "Lionel Derrick" was a psuedonym for Mark Roberts and Chet Cunningham, the former author handling the odd-numbered volumes and the latter handling the even-numbered ones.
The Mafia-vendetta of volume #1 is quickly jettisoned. Instead, this volume appropriates a freeflowing angle: Mark "Penetrator" Hardin takes on a personal job this time out, vowing to destroy a sordid organization which has mutilated a female acquantance. After wiping out the California branch, Hardin traces the organization down to Las Vegas. What these people do is provide female talent for clubs and casinos; the girls are ordered to provide sex for the clientele, and if the girls refuse they are locked up in cages and "trained." If that doesn't work the girls are mutilated, their faces chopped up, to serve as examples to the others. A busty blonde named The Fraulein helms the operation, an ice-cold bitch who puts all her resources into locating this "California Man" who has destroyed her CA branch and who now appears to be wasting members of her Vegas headquarters.
The battles between Hardin and the Fraulein's men are pretty boring. Indeed, this novel comes close to the nadir of The Sharpshooter #9: Stiletto. It's all just so choppy and clumsy. And repetitive; Blood On The Strip quickly sets into a rut, with multiple variations on the scenario of Hardin staking out the Fraulein's buildings, setting bombs, calling her to gloat, and then killing a few of her men. The Fraulein has the makings of a good villain but in the hands of this version of Lionel Derrick she's more laughable than threatening. She comes off like a total idiot and only after suffering much loss does she smarten up and fight back. To wit, she captures the mutilated girl which set off Hardin's entire campaign, but even this development is quickly curtailed with another middling action scene.
An unintentionally (?) hilarious development occurs halfway through the novel with the appearance of Andrea, a pretty girl who, with her mother, has been hunting down Mark. Andrea's father was one of the Army officials sanctioned in the black market-fiasco Mark exposed in Vietnam (rendered in flashback in The Target Is H). After her father committed suicide in shame, Andrea's mother vowed to find and kill Mark Hardin, the man responsible. Taking her daughter along, she travelled about the country in search of him. And, so close to finding him, died herself in a random car crash. Now Andrea alone survives to gain vengeance for her family.
This would've made for a grand subplot, one that could've been spun out for a few volumes, but the above background is relayed in two pages of dense background immediately upon Andrea's introduction. It comes off like an afterthought, especially when, right after her introduction, Andrea confronts Mark -- and is so overcome by his manly charisma that she hands him her pistol and renounces her family's vendetta. She even agrees to go out to dinner with him! It's all pretty funny and a definite "WTF?" moment -- but then, such moments are hallmarks of the men's adventure genre.
One good thing about Blood On The Strip is that it gets more and more twisted as it goes along. Any rosy conclusions the reader might expect are blitzed in a gory finale in which, again, Hardin acts more like Johnny "Sharpshooter" Rock than the hero we met in The Target Is H. There's a total "Johnny Rock moment" where Hardin tortures a gunman by stomping him on the kidney and then blowing off his kneecaps: "What'd I ever do to you?" the gunman groans, and we can only feel his pain. In the world of '70s men's adventure novels, there isn't much distinction between the heroes and the villains.
Anyway, a bumpy ride, but one with a few rewarding moments. I'm hoping the Chet Cunningham contributions to The Penetrator improve, but again, the rough nature does lend Blood On The Strip a little charm.
The back cover also provides another unintentional laugh, with the line:
It is late. He has penetrated, now he must complete the mission and escape.
Posted by Joe Kenney at 8:50 AM

I'm 99 percent sure I'll never read this book, but nonetheless I enjoyed the review... along with all your others. Keep 'em coming, Joe!

Yeah, knowing that #2 was written by the same guy who wrote the #4 I reviewed, I'm beginning to think he's definitely the weaker of the two writers. I need to read a couple of the odd-numbered books to see the differences first-hand.

Thanks for the comments! Yes, judging from these two volumes alone, I have a feeling I'm going to prefer the even-numbered adventures of the Penetrator. Sometimes though I like to assume that the REALLY bad men's adventure novels are just intentional parodies of the genre...but that's probably giving them too much credit.

I know this review goes back a long while, but I wanted to ask once more about a "spoiler" when it comes to a femme fatale character (if you happen to remember). You mention that what happens with "the Fraulein" after the girl is kidnapped is kind of anti-climactic, but I was wondering just what does happen to her.

Hey, Grant -- as I recall, the Fraulein is bitten by a snake and dies while she's fleeing from Hardin. Female villains being killed by snakes seems to be a recurring theme in this series (ie, volume #17). I'm sure there's some Freudian element at play.

I'm also sure that if I re-read "Blood on the Strip" I'd be a little kinder on the novel; not sure why I was so negative in my review, as Cunningham's entries in the series are generally my favorites.

Thank you.
I've always noticed that even a lot of very violent stories don't like to have showdowns between the hero and the FEMALE villain (s). With a lot of exceptions of course, like some of the books on this site. So I'm not surprised by the idea of those snake scenes (for that reason ALONG WITH the "Freudian" one).

It's a little like most of the Peplum films with "evil queen" characters - something always kills the evil queen (including suicide), but it's almost never the male hero who does it.