The Baroness #3: Death Is A Ruby Light 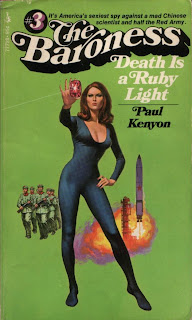 The Baroness #3: Death Is A Ruby Light, by Paul Kenyon
April, 1974 Pocket Books

This is my favorite of the Baroness covers, once again courtesy Hector Garrido. I found the previous volume a middling retread, but Death Is A Ruby Light is great, as if "Paul Kenyon" took a breather and dove back into the series with renewed vigor.

The template followed in the previous two volumes is jettisoned this time out. Indeed, a lot happens in these 200 pages. You know you're in for a lurid thrill-ride when the novel opens with several pages of graphic underwater sex as the Baroness seduces a houseguest in the pool of her Italian villa. Trouble looms, though: unbeknownst to the Baroness, the satellites which relay signals to various US (and Russian) agents about the world have been destroyed; a grave situation which has already resulted in the death of many spies. The Baroness doesn't realize it, but she's next on the list.

Saved by her handler, "Key," the Baroness is briefed on what's happened and again gathers together her team. This time out, luckily, the team is a bit streamlined; I still can't remember all their names or even tell some of them apart. The first suspect of course is the goddamn Commies, so the team heads for Moscow, posing under their usual cover as global fashionistas. The Barones breaks away and tracks into the barren wastes of Kazakstahn. After infiltrating a missile base and bugging its perimenter, she realizes the Russians aren't behind this; as she listens, a repair probe is fried out of the sky, all passengers killed.

The US and the USSR now work together. The source of these laser-blasts now appears to be in the Mongolian reaches of China. A joint US/USSR team will find the base and destroy it. The Baroness will lead, as the US has the exact coordinates of where the laser-blasts have originated. Picking a few of her teammates to go along, the Baroness joins a larger Soviet party. Their leader is basically the Russian version of the Baroness, a good-looking guy named Alexey, who of course the Baroness has tons of sex with during the journey. There's also a hulking guy named Omogoy who has planned with another of the Russians to kill all of the Americans.

This section comes off like John Eagle Expeditor, with the team venturing into a freezing hell. Kenyon amps up the lurid quotient with the obligatory scene of a nude Baroness fighting for her life; the most memorable section sees her captured and held inside a yurt filled with Omogoy and his fellow traitors. The Baroness unleashes her inner Conan and kicks holy ass, despite having her hands tied behind her back. With a red-hot blade she guts one guy and cuts her way through the yurt, running pell-mell through the snow for safety; still nude, the temperature well below freezing. Despite all of this Death Is A Ruby Light follows the time-honored tradition of all pulp spy fiction: the Baroness is of course eventually captured by the main villain.

The villain this time out is Dr. Thing, a towering Chinese astronomer who happens to be albino and also has a false ruby eye. Thing has created the laserworks which are frying the satellites of the US and the USSR; his grand design is to destroy a linkup between space probes of both countries which will be broadcast on global TV. Thing will kill only the Russians so that it appears to the world that America did it; World War Three will ensue and China will emerge victorious once America and Russia have destroyed one another. Thing isn't the only villain here: there's also Sung, commander of the soldiers in the base, a cretin who enjoys torturing his captives. There's a nicely lurid scene where Sung uses a laser setup of Thing's to slice apart one of the prisoners.

It's a series, so there's no mystery of course if the Baroness and her team will escape and save the day. But again it's all delivered very well. There are a lot of good one-liners and the fight scenes are well thought-out and nicely graphic. So too the copious sex scenes, but again they mean little...sex scenes in novels only matter if something else is going on, or if there's some emotional involvement, but here it's just two people screwing (which is fine when you're watching porn, not when you're reading it). But as a guy who grew up reading Penthouse Letters, how can I complain? Death Is A Ruby Light is just further proof that The Baroness is one of the best men's adventure series ever published.
Posted by Joe Kenney at 10:01 AM

Wouldn't you know, this is one that I don't have a single copy lying around. Time to go digging for more titles...sigh...

Thanks both of you for the comments! Jack, hope you can find a copy for a reasonable price.

I like the penis shaped rocket on the cover. Subtle.