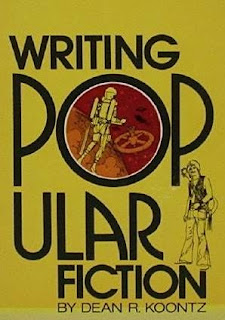 Writing Popular Fiction, by Dean Koontz
1972, Writer's Digest Books
I've never read a Dean Koontz novel, but I'm familiar with his work. I came upon this book by accident: searching the web for more information on my man Burt Hirschfeld. I discovered an article in which Koontz mentioned Fire Island; it turned out that this "article" was an excerpt from Koontz's 1972 book Writing Popular Fiction. The book is of course long out of print and Koontz's fans have driven the prices of used copies into the stratosphere, so I had to get it via InterLibrary Loan like some barefoot peasant.
Koontz advises the nascent writer to get started as a "genre" author, and details six genres to choose from, all of which were popular in 1972: Science Fiction and Fantasy, Suspense, Mysteries, Gothic-Romance, Westerns, and Erotica. It's in this last genre that he discusses Hirschfeld. As a brief sidenote, in 1982 Koontz published another now-expensive book for Writer's Digest, titled Best-Selling Fiction; in that one Koontz basically recanted everything he advised in Writing Popular Fiction, not only because the publishing industry had changed so drastically, but also because some of those "genres" no longer even existed (ie "Gothic-Romance").
Unfortunately the Erotica chapter is the shortest in the book, but Koontz understands the genre. He breaks it up into two halves: Big Sexy Novels and Rough Sexy Novels. The former includes blockbusters in the line of Hirschfeld, but also, most importantly, Harold Robbins and Jacqueline Susann. Big novels about glamorous, powerful people having lots of sex -- but, Koontz warns, the sex in a Big Sexy Novel (aka BigSN) must not be too explicit. However a Rough Sexy Novel (aka RoughSN) can be as explicit as the author desires; RoughSNs in Koontz's mind are all the sleaze paperbacks churned out under various psuedonyms, stuff like Flowers And Flesh.
Koontz is prescient, though, in that he realizes that as time goes on the BigSN will become just as explicit as the RoughSN. He mentions Robbins's just-published The Inheritors, writing that it is "interesting for the strength of its language which is harsher than in most Big Sexy Novels." As most of Harold Robbins's fans will attest, the man's novels only became more and more explicit as the '70s went on, and other trash fiction authors followed his lead.
But the Big Sexy Novel (aka trash fiction) of the late '60s/early '70s usually got a bit more purple than explicit in its sex scenes. Koontz states that "[the Big Sexy Novel] writer often uses the over-written scene to pretend toward 'literary content' or merely to avoid using earthier language that could describe the scene better and more directly."
He then writes the following example, which reads exactly like something one would encounter in one of Burt Hirschfeld's novels, particularly his Hugh Barron material:
As Rita swelled towards her peak, she felt like the sea, the great, all-encompassing sea, the churning of dark waves, so that she was a mindless mass of moving, moving everywhere and all at once. And she cried out, but softer than the sea when it cries against the rocks, more like the soft cry of water on sand, rolling, breaking, foaming, rocking up and down in liquid ecstasy, pulling back to build up and rush in again, exploding...shuddering...

And Koontz gives another priceless example:

It was like a storm for Glenda. He entered her like lightning striking into the dark heart of the sky, and she was filled with a momentary light that faded but, in fading, promised to return in even more brilliant display. And, with that bolt enfolded by her dark night, the rolling clouds came, moving together, parting and then mingling again; and the thunder was their breath as they rolled together, achieving, at last, that greatest flash of lightning and the wet release of storm water.

"If you think these examples are humorous," Koontz writes, "you would do well to read some of the financially and critically accepted Big Sexy Novels to be sobered." And he speaks truth, for the purple prose is part of the charm of those early BigSNs. Koontz seems mostly to have bestseller Henry Sutton in mind (Sutton was a psuedonym of poet David Slavitt, and I hope to review some of his trashy bestsellers here soon), but what he writes is just as true for Hirschfeld and Susann and the others -- though, again, the Big Sexy Novels would become a lot more explicit within just a year or two of Writing Popular Fiction.

"In the Big Sexy Novel," Koontz writes, "the character motivation must be believable; the bedroom action plentiful; the hero and/or heroine sympathetic; the background at least exotic if not colorfully developed; but there need not be a terribly strong plot, in the sense of telling an exciting, tension-filled story." And he further states: "A carefully developed, exciting plot would require too high a ratio of story to sex; every chapter of the BigSN must have at least one sexual encounter, which leaves only a small portion of the book for other purposes."

More priceless advice: "A BigSN hero should be a sexual dynamo, thinking about making love when he isn't, a handsome and virile dreamboat. The BigSN heroine should be exceedingly desirable, possessed of a handsome lust of her own -- but she should always be somewhat hesitant at the start of every sex sequence. Even if she has bedded five different men on fifteen different occasions since the start of the book, she must be a bit trembly and unsure with the sixth man on the sixteenth occasion. Once she has decided to participate, however, she must be his equal as a lover, enthusiastic and versatile."

Koontz doesn't much discuss the Rough Sexy Novel. Indeed, he advises the hopeful writer not to pursue the genre, as the pay sucks and the novels are so obscure. I researched Koontz's work after reading this and was shocked to discover how much the man has published, under a variety of psuedonyms; unfortunately however he never gave us a Big Sexy Novel of his own. He did publish a Rough Sexy Novel, it appears, but from what I've read Koontz disowned it due to the publisher rewriting the majority of it.

I say "unfortunately" because Koontz shows that he has a firm grasp on what makes trash fiction work, and he would've delievered a good novel in the genre. He also would've known to give it a good title: "The reader who buys the Big Sexy Novel wants a 'refined' title, something that will not embarrass her when she buys the book, and something which she can unhesitatingly leave out on the coffee table to impress guests or generate conversation."

Koontz states that the Big Sexy Novel genre might eventually lead to "boredom" for authors, as they may soon become "aware that their work is strictly formulized and repetitive." Which does trash fiction a disservice. There are countless books out there which could be designated as "Big Sexy Novels" which are not only filled with originality but also great writing, and aren't in the least churned out by a "bored" author: James Robert Baker's Boy Wonder, Herbert Kastle's Ladies of the Valley, Burt Hirschfeld's work, Gwen Davis's The Pretenders (whom Koontz mentions, saying that in her BigSN novels she has come close to "art"), and on and on.

"Big Sexy Novel" is a good description for what I call trash fiction, but unfortunately Koontz's term never caught on. He barely discusses the genre in the later Best-Selling Fiction, and doesn't even mention Harold Robbins, the undisputed king of the genre -- but then, Robbins's star had already begun to wane by 1982. But in Writing Popular Fiction Koontz gives a great guideline on how one might turn out such a novel. Again, the material is dated -- probably was even dated in 1972 -- but it makes for an entertaining read, especially in that it offers a glimpse of how one author viewed the genre while it was still in fashion.
Posted by Joe Kenney at 8:34 AM

One of the two most useful books I've ever read on the basics of writing fiction. The other came later, also written by Dean Koontz.

Ed, thanks for your comment. I also got that other Koontz book via ILL, "Best Selling Fiction." That one I found a bit more useful in an all-around writing sense, with "Popular Fiction" more of a rigid set of rules for each genre. But then, I read "Popular Fiction" mostly to get an idea on what a working writer of the time thought about "big sexy novels."

The bit about Gothic-Romance is interesting because Koontz wrote five of them under the pen name of Deana Dwyer. Unless you find copies of the books, all that's left of them are the incipits quoted in a biography published shortly after he became a big name in horror fiction. In the same book he indicated he intends to keep those books out of circulation for as long as he lives.