Tilt! (aka The Corruptor) 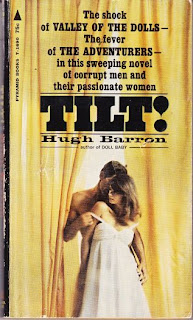 This was the second novel Burt Hirschfeld published under his Hugh Barron psuedonym, and though the Pyramid cover references Jacqueline Susann's Valley of the Dolls and Harold Robbins's The Adventurers, Tilt! is its own thing, unlike either of those two novels. It's about a sleazy PR guy named Deke Dixon who is certain his latest find, a huckster named "Preacher" Pope (really) is guaranteed to become the next governor of California. Tilt! exploits the then-current psychedelic scene, but gradually becomes mired in unrelated subplots and endless rhetoric courtesy Preacher Pope and the other politicians he and Deke become associated with, which gradually makes reading the novel a bit of a slog.

Unsurprisingly, the duo find this is easier said than done. After being turned down by one heavyweight in the political field, they become involved with a far-right nutjob who too sees the potential in Preacher. In true pulp fashion this guy lives in a sort of Medieval castle in the middle of the woods, where he controls an army and plots the conservative Republican takeover of California...and from there, the entire country!

This section of the novel is so prescient as to be both hilarious and sad. The far-right nutjob, Hiram Woodward, runs the Breed's Hill Congress, which caters to the fears and prejudices of the average conservative Christian Republican. It's as if the novel suddenly takes place in 2005 (or any other year during the Dubya Bush reign) and not 1967. Preacher is refashioned into a champion of Old Virtues and Morality, demagoguing his way through the conservative trenches of California, speaking to the fear and paranoia of the "true American." This entails way too many political/religious speeches on Preacher's part, but again, it's funny in that it provides further proof how little things change.

But then, as if realizing he doesn't have enough story to fill an entire novel, Hirschfeld flashes back for a long section which details how Deke became involved with Preacher. We see Deke's conman beginnings in New York City, how due to an affair with his boss's wife he had to leave the city and decided upon LA as his new base of operations. Next comes an endless and bizarre sequence, unrelated to the rest of the novel, in which Deke attempts to make a busty young dancer into a superstar. He arranges one crackpot scheme after another, each of them failures: the strangest is when he hires two bikers to "pretend" to rape the girl, so she can stagger to the nearest news outlet and relay her story. Meanwhile the bikers rape her for real and, instead of even telling the story, the poor girl calls Deke and goes home to recuperate. There's another goofy sequence where she parachutes, wearing nothing but a bikini, into the pool of a famous producer's house while a party of Hollywood notables is in progress.

After all of this Deke finally meets Preacher, and we get little understanding why he so latches onto the guy as a surefire means to success. Preacher's just a hollow-eyed huckster, a man who truly believes in Christianity and yet enjoys sleeping with young girls, the younger the better. Deke, through one of his crackpot schemes with the wanna-be starlet, has inadvertently started a sensation at the local college. There, influenced by Deke's style, two guys have started a sex club. They invite Deke to the next orgy and, after one poor new girl is "initiated" via rape, they all head out to the beach, where Preacher appears like some prophet. Deke watches him work, somehow making the kids listen to his fire and brimstone spiel, and the big idea hits him.

The novel gets even stranger. Deke's big idea is to have Preacher headline at a strip club where, as nude girls gyrate about him, he exhorts the club-goers on the justness of free love and casual sex. And people line up around the block to pay to hear him! This of course generates a bit of publicity, which makes it all the more unbelieveable that Preacher can later be remodeled as a proclaimer of morality and purity. Any muckracking reporter could easily dig up the guy's sordid past, but Deke and new boss Hiram Woodward overcome this by having Preacher get married...to Deke's ex-wife, a failed actress and all-around-drunk named Margot.

I guess my issue with Tilt! is that it's just all so hard to buy. The psychedelic club stuff is pretty good, with lots of go-go dancers and flashing lights, but it doesn't gel with the old traditions rhetoric Preacher must later spout. Also, Preacher himself doesn't even want to become the next governor of California, so again Deke's single-minded determination rings hollow. And there's too much going on, none of it satisfactorily tied together, including the subplot of Deke trying to woo a major superstar named Margot Sain -- the suspense is ruined because a third of the way through the novel we see, via a long flashback, Deke's vain attempts to win the girl over; meanwhile, we already know from the first half of the novel that the two are a couple.

Normally I enjoy Hirschfeld's writing but I found parts of Tilt! a bit wearying. His style here is more affected than usual, and I'm certain this is due to his trying to fill a page quota. This too would explain all of the random and unrelated backstory for Deke. Also the page-long diatribes of Preacher and the other conservative politicians. But despite it all I still enjoy the guy's writing. It's a toss-up; I love the Hugh Barron novels because they're so pulpy and exploitative, but the novels Hirschfeld published under his own name are just better written.

NEL published Tilt! under the better title The Corruptor in 1969. Here's the cover: 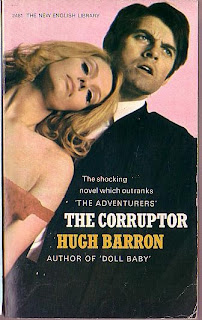 And here's the cover for the rarely-seen Dell reprint from 1985: 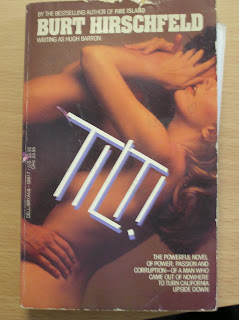