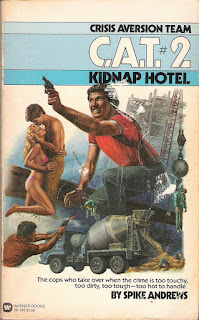 A short-lived entry in Warner’s “Men Of Action” line, C.A.T. ran for three volumes and was about a pair of tough cops who were the sole members of New York’s “Crisis Aversion Team.” According to Hawk’s Authors’ Pseudonyms “Spike Andrews” was a house name for George Ryan, but according to Allen J. Hubin Ryan only wrote this second volume and Duane R. Schermerhorn wrote the first and third volumes.

This is the first George Ryan novel I’ve read, but also according to Hawk’s Pseudonyms he wrote the strange-sounding Crime Minister series under the pseudonym “Ian Barclay.” Kidnap Hotel isn’t a knockout or anything, but judging from it I’d say Ryan isn’t too bad of a writer, doling out a tale that has a very Len Levinson kind of vibe, with a goofy plot, quirky characters, funny dialog, brief snatches of violence, and generous portions of sleaze. There’s even a little philosophy.

The CAT team is comprised of detectives Stewart Weston and Vince Santillo. Both are in their 30s and are ‘Nam vets. There really isn’t much to distinguish them other than that Weston is white and has a wife and two young daughters, and Santillo is the Itallian Stallion who sleeps around. Other than that the dudes are identical, and there’s really nothing to tell them apart when they’re together, like, “Oh, it makes sense that Santillo would’ve done that,” or anything. In other words there’s no Lethal Weapon-esque stuff where one is constantly bemoaning the tactics of the other. They’re both equally wild and reckless.

But true to the cliché their “stupid chief” is another matter. This is Lt. John Hunt, who does constantly bemoan the wild and reckless tactics of the CAT duo. But again the Len Levinson feel is here in that Hunt sometimes looks the other way and also enjoys engaging his two junior officers in witty banter. Also true to the cliché Lt. Hunt is constantly under pressure from the commissioner and the mayor, and thus puts Weston and Santillo on a case outside of their normal purview: someone is briefly kidnapping wealthy people off the city streets, holding them at gunpoint, and ordering them to walk into the nearest bank to make a healthy withdrawal for ransom.

With his first and only novel for the series, Ryan already appears shaky about the whole “crisis aversion” angle; we’re informed that Weston and Santillo are supposed to focus on city-wide crises, but since such cases are so infrequent and rare, they usually just help out New York precincts on random cases! I mean geez, don’t you think we could’ve read about one of those city-wide crises? But I don’t intend to complain to much, as Ryan does turn in a fun, if goofy, installment, which while not having much of a crisis at least keeps moving. Kidnap Hotel runs 219 pages, but it’s got big print and it moves at a fast clip.

The kidnappers are just a group of teenagers, led by a surly London youth named Graham. Later on we’ll learn that Graham was a roadie for the Sex Pistols. But now he leads a group of five guys and two girls who have grown up on the tough streets of New York and now live almost communally, the guys sharing the girls. Oh, and they’re also apparently trying to start a rock group. Indeed we learn that their whole kidnapping scheme is so to raise the cash to record a proper demo! These eight teenagers aren’t the usual men’s adventure antagonists, and they aren’t all that threatening, never even killing any of their victims.

After swiping a few rich old men and women off the streets, the gang sets their sights higher. Stupid member Moose works as a night guard on an unfinished building on 86th Street and 3rd Avenue; spanning twelve floors, it’s mostly just a steel skeleton with plastic tarps for walls. Graham comes up with the idea to kidnap a bunch of wealthy people and hold them here; he dubs the place “Kidnap Hotel,” and another gang member gets the day guard job so that the gang has it to themselves 24-7. Since it’s so unfinished, we’re told, the lawyers responsible for the halted-due-to-red-tape building are afraid to visit it, due to a fear of heights.

Meanwhile Santillo and Weston deal with random shit. In addition to loose sea crabs in Greenwich and a vague mention of a trio of young women who rob banks, they also tackle Mad Miguel, a Lower East Side scumbag who has a nasty method of dealing with people who don’t pay for his heroin: he chops off their hands. He’s just done this to a young boy, and Weston and Santillo descend on the scene. Having dealt with Miguel before, and sick of how he always walks free due to the liberal courts, they take him down in a memorable sequence, one which sees Miguel throwing a baby out a window (Santillo catches it) and culminates in Weston jamming a hot iron in Miguel’s face. (We’re later informed both of his eyeballs burst from the heat!)

Ryan I’m guessing must’ve been a New Yorker, as Kidnap Hotel almost works like a tour of the city; again, just like a Len Levinson novel. But at times it gets to be too much, with the topical details reduced to street directions. He also appears to have spent some time with New York cops, as he fills the novel with cop-world details and the complaints of an average cop, in particular the public outcries against their “brutal” tactics. In fact one part of the book really struck home, given the current “cops are nothing more than white racists with guns” mentality prevalent in the United States, courtesy MSN.com and its ilk:

Stewart Weston broke a rule that many cops made for themselves. He liked to talk to his wife about the questions posed to him by his work on the underbelly of society. She was a liberal and believed that if everyone had an education and a job, they would all be constructive, love artistic things, and live peacefully together. The streets had given Weston a more biblical view of things. He saw good and evil conflicting in men’s souls, and one or the other gaining the upper hand. People’s surroundings and poverty seemed to him often to bring out extraordinary good as well as evil in an individual. He suspected that extreme wealth had the same effect on people as poverty, but he couldn’t be sure since he didn’t come across nearly as many rich people as he did very poor.

If Stewart Weston had been anything but a cop, this line of introspective thought would never have occurred to him. But once a man daily gets called a pig, a racist, a fascist, a lackey for the millionaires who own America, and so forth, he naturally takes a hard look at himself from time to time. What infuriated Weston was the total unfairness of most of the name-calling and the total gullibility of those who were so willing to believe anything bad about the police – until they themselves got ripped off and started screaming that the cops should kick ass and they should bring back the death penalty.

Speaking of Weston’s family life, these scenes are some of the highlights of the novel. Weston not only talks openly about the nightmarish aspects of his job to his wife, but also to his two prepubescent daughters. Ryan has a gift for dark comedy and these scenes are filled with it, as the two little girls sit slackjawed and listen to their father dole out these stories of atrocities, usually taking everything he says literally, like when late in the book he complains that he practically hanged a suicidal girl with his own hands. (“Did you really hang a girl, Daddy?”) They then rush off to tell their friends all about their dad’s latest bloody exploits.

Santillo doesn’t get as much fun stuff, but he does get laid by random women – twice in this one novel alone. First it’s some lady he saves in the garment district, and then later it’s one of Graham’s gang, a pretty brunette named Harriett. Ryan doesn’t shy from the details, though the novel doesn’t go into outright sleaze, with the actual shenanigans only taking up a paragraph or two. Even some of this stuff has dark comedy, like Lt. Hunt complaining that Santillo must be losing his skills as a Latin lover, as despite having sex with him Harriett still doesn’t blab all she knows about Kidnap Hotel; he says that next time Weston gets to have sex with the suspect!

As for the Kidnap Hotel material – it too is goofy, but fun. Graham and gang assemble a motley crew of quirky characters, all of them wealthy. The most memorable of the hostages are the three women: Jane and Wilma, two young, married, and bored socialites, and the wonderfully-named Favia Wanderlust, a black “disco singer” who towers over most men and wears skintight gold pants. True to the goofy spirit, the hostages look at their stay in “Kidnap Hotel” as a vacation, and soon it all devolves into an orgy, with the three women sleeping with all the men, and usually bickering over who gets to sleep with German opera conductor Von Ryder, who is the most skilled lover of the men.

Santillo and Weston operate under all the standard “tough cop” rules, beating up random suspects, getting in car chases, pulling their guns all the time, and trading quips. They also bend the rules past the breaking point, like when they accidentally kill one of Graham’s gang in a car chase and then have the coroner secretly make the corpse look like it’s still alive, so a photographer can shoot photos of it. They take this shot around town to track down leads on who might know the mystery man. But even then it’s only blind luck that leads them to the location of Kidnap Hotel; one of the hostages attempts to break free after the ransom has been paid, and tosses a bundle of money off the roof of the 12-floor structure; Weston and Santillo just happen to be walking by, and see it!

The finale isn’t heavy on action but at least it continues with the fun vibe. Jan and Favia chase down the surviving female member of the gang, beating the shit out of her right on the street, and Weston and Santillo get in a gunfight with Graham. But again these criminals are outmatched by the protagonists, so there’s no tension or suspense at all. In fact Weston and Santillo get more of a challenge from Mad Miguel, and even he isn’t much of a match for them. At any rate, this was Ryan’s only contribution to the series, so next time I’ll see how Schermerhorn’s work matches up.
Posted by Joe Kenney at 6:30 AM

I would love to see you review THE CRIME MINISTER, the first volume in that series is truly bizarre, with an amoral assassin hero who is hired by some ex-Nazi German businessmen to knock off a Turkish heroin kingpin. At one point he needs a patsy corpse, so, of course, he's off to the gay bar to find a child molester ...

“CAT” stands for something different every time I see it in fiction. I first encountered it in the comic book series “WildCATs” (Covert Action Teams); there was a TV movie in the eighties called “CAT Squad” (Counter Assault Tactical); and apparently there’s some show called “Chuck” which has an episode where he’s up against a CAT (Clandestine Attack Team) Squad.

I thought CATS from “All Your Base Are Belong to Us” was an acronym but apparently it isn’t. The guy’s name is Cats.