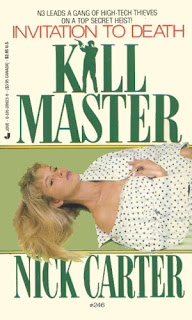 Jack Canon turns in yet another volume of the seemingly-neverending Nick Carter: Killmaster series, which at any rate did end about a year after this one was published. Like the earlier Canon installment Blood Raid, this one’s in third-person and comes off like a Robert Ludlum-esque Europe-trotting espionage affair, overly “realistic” and methodically paced, as compared to the pulpier volumes of the series’s earlier years.

We meet Nick Carter already on his latest mission, in London and looking up what turns out to be an old colleague of sorts – a dark-haired beauty who now goes by the name Lola and runs a strip club. But we quickly learn this lady is actually Serena, who last appeared in the Canon installment The Satan Trap, published ten years before. As we’ll recall Serena was a con lady and almost got Carter killed a few times – that is, in between banging him a whole bunch. Canon refers back to that earlier volume a few times and makes it seem pretty clear that this is the first Carter has seen Serena since then; he’s kept up with her shady underworld adventures, though, and has sought out her assistance for this job.

One wonders why Canon even bothered to bring back such a minor character ten years after creating her, especially when Serena is referred to as “Lola” from here on out (and will be in the review as well). She’s practically a different character anyway, so it doesn’t make much sense. Their previous adventure is only given cursory mention, but then Nick Carter by necessity is a blank slate of a protagonist due to the army of ghostwriters who control him. The most important thing, really, is that Lola/Serena is smoking-hot and super-stacked and she enjoys dressing ultra-slutty to the jawdropping enjoyment of all red-blooded men. She’s also Carter’s sole bedmate in this novel, which is pretty surprising, but then the AIDS paranoia was in full effect at the time and even James Bond himself was reduced to sole bedmates in his own adventures, like in The Living Daylights.

“N3 leads a high-tech gang of thieves on a top secret heist!” proclaims the cover, and while that does sum up the central plot of Invitation To Death, it takes about a hundred pages to get to it. This is standard of the Canon novels I’ve read; lots of wheel-spinning until the rushed finale. But as I’ve mentioned before, one bonus of these later installments is the more explicit sex scenes, which always increases the trash quality; Carter and “Lola” get it on posthaste after being, uh, reconnected after all these years. (Though to be sure, nowhere is it implied that the previous adventure occurred a decade before; this is part and parcel of that whole “blank slate” situation.)

Carter’s trying to get info on the whereabouts and plans of Gerhard Rouse, a terrorist/thief who usually works for the Russians. Vague intel has it that Rouse is planning some major heist, but of what? Eventually we will learn that it’s of the plans for top-secret space weapon technology. Rouse’s target is a young American who is transporting the documents into London; Rouse hires a team of London low-lifes to ambush their car, kill everyone, and abscond with the documents. In the melee the young American is able to use a special lighter that shoots long bursts of flame to scorch off half the face of one of the low-lifes.

Meanwhile Carter’s several steps behind, and by the time he figures out what’s going on Rouse has already left London. Here Carter is informed what exactly Rouse has stolen, and so begins the “heist” portion of his mission. Rouse was hired by a billionaire named Charmont who lives in a palatial residence “near Arles, on the Rhone River;” Charmont intends to sell the documents to the Russians for an exorbitant amount. To ensure he alone has the wealth Charmont even sends his hotstuff female assassin off to London to kill Rouse. And talk about a huge miss: the lovely lethal lady basically disappears. I figured it would be a given that she’d meet up with Carter, but nope, Canon apparently forgets all about her.

Instead, more focus is placed on Carter’s recruitment of his heisters. Carter’s mission is to retrieve the documents, but since Charmont is a world-famous celebrity the theft must not only be kept secret but cannot be tied in to US intelligence. Thus Carter must recruit actual criminals. He and Lola go about Europe picking various dudes: a safecracker, a demolitions man, even a studly young Spaniard whose job will be to pose as a famous matador. The heist will go down at Charmont’s villa while a grand party is happening; Charmont hosts frequent major affairs and so Carter and team will go in while the festivities occur and steal the documents, hopefully before the Russians arrive.

We get a lot of ultimately-pointless digressions from the point of view of the Russian commander who is trying to find Carter; the Russian’s wife, also in the KGB, will be at Charmont’s to broker the deal. The final quarter sees a lot of training in Carter’s camp, with the only problem being the young Spaniard who constantly bucks Carter’s authority. Finally, at long last, the heist goes down. Carter and team suit up in black with facepaint, berets, and masks, and infiltrate the villa at night, while the rich are partying within. Carter’s accomplices think this is merely a regular heist, and know nothing of the documents, so to ensure the cover story Carter takes part in robbing the various elite, taking their cash and diamonds.

The entire novel is pretty bloodless, with Carter insisting that no one be killed in the heist. He and his team use stun guns, and Carter only shows his customary “Killmaster” techniques when one of his team goes rogue and when Charmont refuses to reveal where he’s stashed the copies of the documents. The finale is particularly bizarre, with Carter taking captive that Russian commander’s wife and using her as blackmail to ensure their freedom. This all gets real weird when Carter ties the woman onto the grill of his car and drives up through snowswept mountains, confident that the lurking Russians won’t shoot when they recognize the woman he has strapped to the grille(!?).

And that’s that, Carter destroys the space weaponry documents and tells Lola so long; she says she might change her name to “Tereza” and Carter intimates they might see each other again someday. Her character by the way turned out to be more enjoyable than Carter himself, always thinking of money and bantering with Carter.

All told Invitation To Death was marginally entertaining, but it’s seeming more apparent to me that the best volumes of Nick Carter: Killmaster were those published in the ‘60s, when Lyle Kenyon Engel was in charge of the series.
Posted by Joe Kenney at 6:30 AM

I would expand this to the end of the 70s, Joe, but the "realistic" Carter didn't work most of the times for me either. In the 80s the concept Carter and Axe became ever more anachronistic, and it showed.

Thanks for the comments! Robert, I've got a few of your volumes and look forward to reading them. I didn't mean to imply that the quality of the books or the writers after the '60s were bad, I just meant that I prefer the slightly-more-over-the-top vibe of those Engel-produced joints of the '60s. And to your point Andy, I see that some of those late '70s Killmaster books do keep to that vibe. I doubt any of them match The Sea Trap, though. If any of them do, I want to know about it!

Difficult question. After a view into the list I came to realize that in hindsight there are indeed a lot of 70s novels I would rate rather poorly written today and have forgotten most about them.

Among those I remember are the ones by pulpmeisters Ahern and Rosenberger, "Turkish Bloodbath" and "Thunderstrike in Syria". They are not good, but interesting :-)

About the rest I would say "The Fanatics of Al-Asad" and "Snake Flag Conspiracy", both by Saul Wernick. "Under the Wall" (which is interesting because it is kind of an early "realistic" Carter).

I thought the best ones were written in 1976. The list. Death Message Oil 74-2, The Vulcan Disaster, and The Turncoat.