Another Time, Another Woman 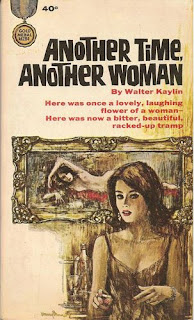 It’s hard to believe that for a guy who cranked out so many men’s adventure magazine stories from the ‘50s through the ‘70s, Walter Kaylin only published two novels: this one, a Gold Medal paperback original from 1963, and The Power Forward, which came out in 1979 and never received a paperback edition. But this was Kaylin’s only crime novel, which is very puzzling, given that he even published a few stories in the legendary Manhunt magazine; you’d figure he would’ve been a Gold Medal regular.

In the Kaylin anthology He-Men, Bag Men & Nymphos, editor Bob Deis features an interview he recently conducted with Kaylin, who is now in his 90s. This is all Kaylin had to say about Another Time, Another Woman: “It was pretty cheesy, but I got $2,500 for it. And $2,500 was a lot of money when you were getting $300 for writing a story, so I was very pleased with that.” Given that Kaylin wrote the book 52 years ago, you can forgive him for not having much more to say about it – and sad to say, but Another Time, Another Woman really is mostly forgettable. It only runs to 128 pages, and you keep waiting for something to happen, but unfortunately nothing much ever does.

I don’t mean to imply that Kaylin’s not a good writer; in fact it’s because he was so prolific in the pulp realm that you expect more of him. The aforementioned He-Men anthology opens with a short story titled “Snow-Job From A Redhead,” which appeared in the June 1956 issue of Male but is more the sort of thing you’d expect to read in Manhunt, just a very hardboiled crime story with plenty of action and thrills. Given this I expected Another Time, Another Woman to be along the same lines, but instead it’s more of a slow-boil thing that, well, never gets to the boiling point.

The first issue comes with our narrator, a 32-year-old jazz pianist named Harry Quist, who turns out to be a heel of the first order. Harry, we gradually learn, got in a head-on collision with another car three years ago, killing the entire family in it and also injuring his wife, Mildred, who was eight months pregnant at the time. The baby died shortly after. Harry wasn’t drunk or running from the mafia or anything; he was just being negligent, speeding through the Pasedena hills in the middle of the night. And rather than taking responsibility for his actions he covered up the accident and took Mildred to his old pal Dr. Emmett Gregg, knowing the guy would fix her up and keep it all hush-hush.

So yeah, our narrator is an asshole. But even worse is the way he tells us his tale. Somehow Kaylin must’ve decided he’d try his hand at like “beatnik hardboiled” or something. Being a jazz pianist, Harry is already “cool,” or at least thinks of himself so, and blabs his story to us in a breathless rush of pseudo jive talk that really comes off as pretentious more than anything else. For example:

Now you take fear. Fear hangs inside you like a deflated basketball bladder brushing so easily against heart, lungs, kidneys and intestines there are times you don’t even know it’s there. Not until it begins to inflate. Begins to press. Begins to crowd. Now try breathing. Try moving your bowels. Hard, ain’t it? Hurts, right? That’s because you’ve got something solid as a bowling ball in there and it’s squeezing the pee/paste/puss (five points f’r each k’reck answer) out of everything you own.

I just chose that example at random out of the book, but it’s like that throughout; what starts as an interesting paragraph or thought soon spirals into contrived nonsense. Actually, the biggest impression I get is that Kaylin was just trying too hard. And who knows, maybe after writing so much pulp for the men’s mags he was having fun letting his hair down and turning out a story that, for once, wasn’t about some square-jawed American soldier in WWII. But the cumulative effect of Another Time, Another Woman is weariness; at least it was for me. Harry’s way of telling his story got on my nerves quick. But then, he is an asshole, so maybe that was Kaylin’s point.

Harry’s wife Mildred, now ex-wife, is the titular woman of the novel (though the title could in fact refer to two other women, as mentioned below). A shell of her former self, she’s now married to Dr. Gregg, ie Harry’s old pal who saved her. She whores herself out to man after man in the hopes that someone can get her pregnant again, despite the fact that the crash Harry got her in has rendered her infertile. This is dark stuff, obviously, and it’s typical of Gold Medal that this aspect was hyped on the front and back cover (which refers to Mildred as a “slut”), making it sound a lot more salacious than what it really is – downright depressing.  Mildred also turns out to be the character on the cover; we are informed that Emmett has a painting of a fully-nude Mildred which hangs in their home.

Harry informs us that after the crash that night he left town, Mildred obviously wanting nothing to do with him due to the loss of her baby, but eventually he came back because he loves Hollywood. Now he plays in a nightclub, torch singer type stuff, with a new girl named Jessie doing the vocals. That Jessie doesn’t work the audience and play up on her natural sex appeal is something the owner of the club is constantly bitching about, and Harry’s always being nagged at to tell her to sex it up. But Jessie’s sort of a prude due to the fact that she’s already a widow in her early 20s, her husband, a writer, having contracted a rare disease and dying a year before. Now she cuts off her emotions and is constantly shutting down Harry’s advances. Hence Jessie was also “another woman” in “another time.”

The novel occurs over a few days and starts off with Harry being called away from the club in the middle of the set by Mildred, whom he hasn’t seen in years. He’s aware of her infedility, though, having kept in touch with Emmett, who himself is a bit of a lothario at the local hospital. Mildred was in the act of entertaining Sidney Flake, husband of the wealthiest woman in town, Vivian, but now Sidney is dead in the guest house, an icepick in his head. Mildred tells Harry that Emmett came home earlier than expected, caught her with Sidney, and the two men enganged in a brawl, this being the outcome.

Now Mildred demands that Harry hide the body and ensure Emmett doesn’t get in trouble. If he does get in trouble, Mildred will go straight to the police and tell them about that fatal car accident Harry caused three years ago and then covered up. So Harry is blackmailed into it, though he soon finds out there’s more going on than this simple story. Harry goes back and forth, meeting with Emmett (who’s hiding in his hunting lodge and then in the woods), being pressured by Mildred, and being interrogated by the Gary Cooper-esque Sgt. Combs, a cop who goes around with a little pet monkey named Baked Beans that he keeps in his pocket.

This is not an action-packed tale by any means. In fact there isn’t a single shootout, fistfight, chase, or even sex scene in the entire novel. It’s all about style and mood, and as stated your mileage will vary. Kaylin does come up with some goofy characters, like Sgt. Combs, as well as the so-called Father Zosimus, a lunatic who preaches a bizarre off-shoot of Christianity which demands that you “wound God” by harming likenesses or representatives of Jesus, the idea being that to truly suffer you must hurt that which you love most. Zosimus has gotten his hooks in rich Vivian Flake, whom we’re told lives in a cave on her own expansive property and has for the most part gone insane. She then is yet “another woman” in “another time,” like Mildred and Jessie a shell of her former self.

Gradually Harry learns that there is more to the story than a simple act of a husband’s rage; Combs employs an old drunk, the man who discovered Flake’s body in Emmett’s guesthouse, and the old man reveals that Flake wasn’t dead when Emmett staggered away after the fight. As for Emmett, he’s certain Mildred did it, as it’s revealed that Sidney Flake had a sadistic streak and was known for mercilessly beating and maiming women who ran afoul of him. So Emmett’s certain that Mildred, fearing that she would suffer reprisals from Sidney once he recovered from the beating Emmett gave him, took matters into her own hands and murdered him. Now Emmett presses Harry into his service, pressuring our narrator to help him set up fake clues that will exonerate Mildred – and put the blame on Vivian Flake.

Emmett wants it to look like the rich lady, who is insane anyway, secretly followed Flake, discovered him in bed with Mildred, and then took the opportunity presented to her and drove an icepick into Flake’s head as he lie there insensate in the guesthouse after Emmett beat him up. Harry goes along with all of this…only to eventually learn that this isin fact what happened, and Emmett has stumbled onto the truth without realizing it. However none of this is played out in any dramatic fashion, with Harry relegated more to the role of a reporter or something, just shuttling around Pasadena and Hollywood and meeting an assemblage of odd characters with affected personalities and habits.

Indeed the tale is so in Harry’s thoughts that the main plot culminates in a depressing murder-suicide that happens off-page and is given no buildup or payoff. Instead more narrative space is given over to page-filling tactics, like when Harry reads a short story written by Jessie’s dead husband and Kaylin actually writes out the entire story, which takes up a few pages. More page-filling is handled by long chants and prayers courtesy the followers of Father Zosimus. I forgot to mention that there are no chapters in the novel, only white space to break up the various sections. But still you get the feeling that there’s either too little story here to justify 128 pages, or that Kaylin just left out too much of it.

He does however end on a bit of a lighter note. Harry manages to break through Jessie’s hard shell, talking her into staying in Hollywood with him. But even here there is a touch of uncertainty, as a part of Harry wishes she would just leave and he wouldn’t have to worry about her – yet another indication that our asshole of a hero has still not learned to be responsible for himself or his actions. Have I mentioned that throughout the novel Harry doesn’t once show any remorse for his actions of three years ago?

I can’t give Another Time, Another Woman a ringing endorsement, either for Walter Kaylin fans or for fans of Gold Medal in general. As a crime story it’s lacking and as a character study it’s frustrating because our main character apparently learns nothing. However the theme of the three ruined women is skillfully played out by Kaylin and indication of the caliber of his writing, and the goofy characters are all memorable. But the contrived pseudo-hipster jive talk of our narrator quickly grates, and makes you glad when you’re finished the novel and can move on to something more rewarding.
Posted by Joe Kenney at 6:30 AM

Father Zosimus is probably a reference to Father Zosima from Dostoyevsky's Brothers Karamazov.

I don't know what that says about either novel though.

I have seen the cover somewhere before