The Illusionist #1: The Most Happy Con Man 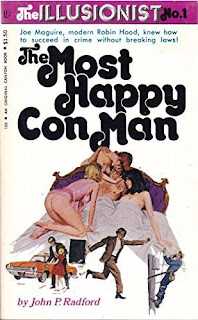 The Illusionist #1: The Most Happy Con Man, by John P. Radford
No month stated, 1974  Canyon Books

Published by Canyon Books, the same outfit that brought out the first few volumes of the Hitman series before they went out of business, The Illusionist ran for four volumes and, judging from the covers, you’d assume this series was a light-hearted caper sort of thing.

But I perservered and read the damn thing, which let me tell you was not a pleasant experience. What makes it all the stranger is that Radford, who I’m betting was just a sleaze writer using yet another pseudonym (the book’s copyright Canyon), can actually write, with some goofy lines and bursts of philosophy. But for all that his characters speak in the most wooden, expository dialog, and his talent for “plotting” leaves much to be desired. He’s also not much concerned with forward momentum, with the story just sort of drifting along for 190 pages until the big caper plays out in the last fifteen; but then, this is just a sleaze novel, and the focus is more so on the rampant sex scenes.

Our hero as such is Joe Maguire, 45-year-old former engineer who served as an executive on the Apollo space program throughout the 1960s and was instrumental in getting man on the moon. Joe was once ultra-wealthy and had a wife and children. But then Nixon came into office and it all went to hell. This book bashes Nixon so frequently that I started to suspect that the author himself had been wronged by the man in some way. Anyway, Nixon fired everyone on the Apollo staff and Joe’s vast fortunes quickly plunged. Soon enough his wife left him (as for the kids, the author doesn’t really say what happened to them).

Now Joe is penniless, so down and out that he’s forced to live with a “dirty whore” named Midge. Staying in a dank fleabag apartment in Hollywood, Joe, who we’re informed looks like “an aging Woody Allen” with his scrawny frame, short height, balding head, and glasses, is basically a kept man, there to serve streetwalker Midge. Here’s the gross stuff. Midge, my friends, refuses to bathe – or to clean herself in any other way. Radford shows us what we’re in store for in the first few pages of the novel, as Midge comes home late at night after her daily whoring duties and demands Joe make his daily payment to her: in order to stay in the apartment, Joe must have sex with Midge every night.

Here we go – and grab your barf bag. I mentioned Midge never bathes. Well, she doesn’t clean up at all. And she’s just been with like thirty guys. And that’s just tonight. So now Joe must do his duty after all these other dudes have been, uh, filling the hole, and the stuff Radford writes here is so tasteless as to be beyond belief. The author spares no details. Did I mention that Joe has a ten-inch dong?? This causes most of the gross-out issues, particularly given those aformentioned details on how Midge never cleans up after screwing her johns. Puke city, people. Seriously! And afterwards we’re duly informed how Joe cleans himself off with vodka and hard soap scrubbing and etc.

So as a porn novel, we’re already off to a bad start, as this is easily the most disgusting “sex scene” I’ve ever read. But our author’s just getting started. The next night Joe’s at his favorite bar and runs into Esther, hot young tramp who once worked as his maid. Esther informs Joe that she’s long desired to have sex with him and practically demands they go back to a hotel room, which she’ll pay for. On and on this one goes, with the gal gorging on Joe’s humongous dong, lots of detail on Esther’s private areas, and again with the gross-out material as we’re informed how hairy she is down there, both on the front and in the rear….!

Reading The Most Happy Con Man, you soon assume that “John P. Radford” hated both the reader and himself, and was determined to just offend everyone. But somehow after the pages-long bangings we get the beginnings of a plot. Esther mentions she’s now a maid for the wealthy Richards family. They have more money than they know what to do with. But the issue now is, due to a photo story about their lavish home in the L.A. papers, they’ve made themselves easy prey for criminals, in particular a recent kidnapping threat on their young daughter, Karen.

It turns out the would-be kidnapper was some young black kid in Watts, one who had no clue what he was doing. As Esther happily goes over all the things the kid did wrong (giving the Richards family too long to collect too small a ransom), Joe thinks to himself how he could’ve done a better job. He’s already been thinking of getting into crime, but not in a way that would harm anyone. Indeed, he doesn’t even want to do actual crime but only the illusion of a crime having been done; in Joe’s mind, this would be the perfect criminal, a person who only pulls off things that seem to have been crimes but in reality weren’t.

Meanwhile Joe has run into an old Apollo program pal of his (at the same damn bar – the author could give a shit about coincidence): Bob Sidak, an electronics wizard who further fuels Joe’s interest in crime by relaying the long story of how he built this gizmo that made long-distance calls for free on Ma Bell’s dime. And yet it wasn’t illegal at the time due to the wording of Bell’s usage laws.  This makes Joe think again of how a smart criminal could get around vague laws.  Bob’s now buds with a salesman named George Harris, who proclaims himself an “old con man,” and has further tales of the sort-of criminal cons he has run in the past.  Joe begins to hatch a scheme.

Inspired by “his favorite television program,” Mission: Impossible, Joe decides to put together his own team of caper specialists. Only his team will be devoted to thievery. (Despite what the back cover proclaims, Joe Maguire is not a “Robin Hood, 1974;” he steals for his own good and doesn’t give the loot to the needy or whatever.) Meanwhile, lots more screwing occurs. In true sleaze novel fashion it’s as arbitrary as can be, from more bouts with Esther to even a completely-arbitrary part where Joe’s driving around one night and comes upon a young hippie girl, who gets in the car, announces she’s horny from a “pot party,” and begs Joe to pull in to the nearest parking lot so she can screw him right there in the car.

Well anyway, Joe has decided he’s going to become “The Illusionist.” He’s going to run a crime caper in which he won’t even commit a crime. He brings in Bob and George, and here’s one interesting thing Radford delivers – Joe even runs a con on them. Telling them he’s been hired to perform a prank on a mega-wealthy dude, Joe lies to his buddies, making them think it’s a simple job for which they’ll each get a thousand bucks. What Joe really intends to do is fake the kidnapping of young Karen Richards and demand a ransom of a quarter million dollars.

We get lots of material of how thoroughly Joe plans this. We’re informed how he was once known for his project management skills, and now will use the same legendary brilliance that he used to get a man on the moon to pull off this caper. But ultimately it’s stupidly simple, as he just uses the specialities of other people. If it wasn’t for his pal Bob’s wizardry with phone lines or knack for impersonations, “The Illusionist” wouldn’t be able to run a con in the first place. As for salesman George, his simple job has him fidning out which banks the Richards family uses.

As mentioned it all plays out in the final fifteen or so pages. Joe’s ruse has him calling Karen’s private school to inform them her mother has had a stroke, and a cab’s being sent for the girl. When the school calls the Richards home to confirm, Bob breaks into the line and mimicks the servant’s voice, confirming the false story. Joe then calls Mr. Richards and demands payment in five minutes, secretly waiting there in the bank lobby and watching him come in and hurriedly collect. The money’s dropped in a car driven by George. Meanwhile, young Karen Richards is taking a mere cab ribe home – something her parents only discover after they’ve forked over a $250,000 for a kidnapping that never happened.

Leaving money for “dirty old slut” Midge (along with a “six dollar douching kit”) and his accomplices Bob and George, Joe takes the vast remainder of his loot and absconds to France, where we’re informed he’s already hooked up with “a Paris whore.” We leave the Illusionist wealthy and excited to continue his life in pseudo-crime, but god give us the strength to read about it. And yet, given that I have the next two volumes, someday I probably will…
Posted by Joe Kenney at 6:30 AM

Well, at least the review was entertaining! Glad you read that dud and not me.

I am pretty sure what Joe does is still a crime from the way you describe it. Of the conman variety not the violent kind, but still a crime.

I discovered your blog a few weeks ago and have been gleefully reading through it (and buying many of the books you've reviewed).

This one had me rolling. Funny stuff, dude.