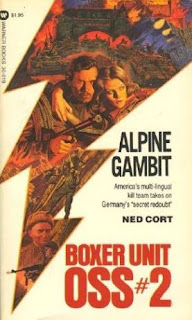 Another short-lived entry in Warner’s “Men Of Action” line, Boxer Unit OSS was like The Hook in that it was set in an earlier era: namely, WWII. Strangely though, the series takes place in the final months of the war, which makes you wonder how long they expected it could last.

The series was credited to the house name Ned Cort, but apparently it was the work of an author named Tom Jagninski, with whom I’m unfamiliar. Whoever he is, he’s more interested in exploring the brooding thoughts of his characters, waxing poetic about art and philosophy, or mulling over man’s inhumanity and etc, with the few action scenes quickly and almost perfunctorily rendered. The series only lasted five volumes, and maybe this is why. At any rate Boxer Unit OSS is about an American team of commandos who take on the Nazis (the series blurb in the back of the book implies they also fight on the Pacific front, but that’s not mentioned in the book itself).

Here’s how the first page breaks down the team: 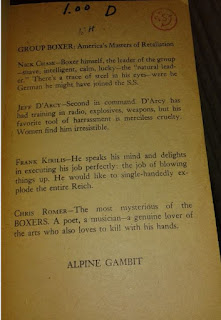 I’ve gotta tell you, though, I had a hell of a time telling these dudes apart. And contrary to the cover depiction, there’s no female member of the team; in fact, the sole female character in the novel appears on maybe ten pages of text (four of which are sex scenes), and isn’t even graced with a name until near the end. Anyway the Boxer Unit itself is sort of like everything you wanted the Inglourious Basterds to be; whereas the characters in that film spent the majority of the time talking or being more sadistic than the Nazis they were after, the Boxer Unit parachutes in behind enemy lines and sows chaos and disruption.

Their present mission has them in Austria, where they are to determine if a rumored cavern complex, the so-called National Redoubt, actually exists. Intel has it that the Nazis, realizing the end is near, plan to hole up in a massive underground fortress in Austria and continue their Reich from within. Intel also has it that the Werewolves, ie the prepubescent terrorists who were former Nazi Youth, have also been spotted in the area in which the National Redoubt supposedly resides – also, there’s question if the Werewolves themselves exist or are yet another PR story by Joseph Goebbels.

The Werewolves do indeed exist, as our heroes learn late in the tale; it’s March of ’44 and the beleaguered Nazis have to rely on kids to do their fighting now. We get one of our few action scenes after the Boxer Unit parachutes into Austria; meeting up with their Russian contacts, they find an SS garrison has already detained them. A pitched but brief firefight ensues, complete with the memorable image of Chris Romer firing a submachine gun with each hand, something for which he’s well-known. Again, all like Inglourious Basterds should’ve been.

But from there it’s all downhill; the Unit splits up, with Chase and Kirilis off to Innsbruck, posing as SD intelligence men, while D’Arcy waits behind with a Russian soldier to monitor the radio and Romer goes off to pose as a worker. Rome in fact is taken out of the action quickly; the Germans have him transporting priceless works of art, plundered from Europe’s museums, to a castle near Innsbruck – a castle which turns out to be the mysterious Redoubt. Rather than an underworld complex, it’s just a castle in which the Nazis plan to store artwork and train Werewolves, to be unleashed on the invading Allied armies. But Romer’s quickly uncovered and spends the rest of the narrative captive.

The author also spends a lot of time on how D’Arcy doesn’t trust his Russian counterpart, who turns out to be a sadist who gets off on killing Germans. Meanwhile Chase and Kirilis go around Innsbruck in the leather fetish wear of the SD, sowing fear in the German rank and file. It’s all like that Star Trek episode Patterns of Force, where all you have to do is pose as a high-ranking Nazi and everyone will do whatever you want. Given their inhuman skill with German language (and I love how the cover boasts that the Boxer Unit is “multi-lingual” – I mean, watch out, Nazis!!), the two easily fool the SS and Nazi officers in Innsbruck into believing that they are true-blue members of the infamous Nazi intelligence party.

Much of the narrative is comprised of Chase and Kirilis interrogating Nazi “subordinates” in Innsbruck, trying to separate the Goebbels-created fantasty from reality. It’s all a headscratcher, really, as we readers already know the Redoubt doesn’t exist, thanks to the sequences featuring Romer. Meanwhile D’Arcy and his Russian comrade get in a few firefights with various Waffen SS troops. Along the way Kirilis manages to score with some German gal, who humorously enough isn’t even named; we just get a fairly explicit two-page sex scene where he boffs “the girl,” our author clearly, uh, “inserting” the scene due to some editorial demand.

Things don’t really pick up until Chase and Kirilis are escorted to the nearby castle in which Romer is being kept prisoner. Here Colonel Seibel, the young SS officer in charge, eagerly shows off his Werewolves; boys no older than 15 who are more lethal than men twice their age. The author adds some bizarre stuff with the appearance of Frederick, a 14 year-old Werewolf with steel hands! And he’s purposedly had his real hands cut off, replaced with these razor-sharp appendages…plus he can shoot the damn things off his arms!! It’s all so crazy and weird you have to love it, but unfortunately Jagninski doesn’t do much to exploit it, save for a too-brief bit later where Frederick and another Werewolf attack our heroes.

D’Arcy meanwhile heads for Innsbruck himself, where he not only deduces that Kirilis, a notorious hound, got laid, but also somehow deduces who he laid. Yep, it’s “the girl” again, and this time we’re informed she’s a German widow who has slept around with a vast assortment of SS brass. After a less explicit sequence than the earlier one, the girl points D’Arcy in the direction of his two undercover comrades…oh, and meanwhile, she knows who they all are. Turns out “the German girl” is really Caroline Chalmers, herself deep undercover, a spy with British Intelligence. Not only has she now slept with two members of the Boxer Unit, she also wants to help them take out the Werewolf castle.

Romer freed and the Unit back together, our heroes, still using those SD credentials, gather up a bunch of explosives and head on out over the snowsept roads for the castle. There they set the charges and blow the sonofabitch sky high, priceless works of art (and young Werewolves) inside or not. And that’s that. Meanwhile Wild Bill Donovan, OSS chief and overall commander of the Boxer Unit, lights a pipe and exchanges more witty banter with his British colleague – the novel arbitrarily cuts over to these two characters, discussing the war in Paris or something, in an obvious page-filling gambit.

Overall, Alpine Gambit doesn’t have much sex or violence, features four main characters who are interchangeable (and easily confused), and really isn’t very memorable. It has a great cover, though.
Posted by Joe Kenney at 6:30 AM