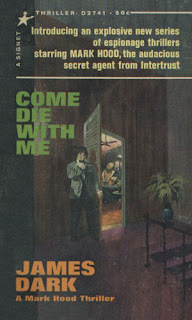 Ian Fleming died in August of 1964, just as Bondmania was gripping the world. One more James Bond novel was published after Fleming’s death, The Man With The Golden Gun, but spy fiction fanatics would have to look elsewhere for their pulp espionage fix. Luckily, there were about a million cash-in Bonds operating out of the various paperback publishing lines; secret agent Mark Hood was just one of them.

Hood, a studly man of wealth (later volumes would give his age as 36), is American by birth but studied at Oxford, resulting in a worldly air with an American/British sort of accent. He’s world-famous for various things, not just due to his millionaire playboy status; he’s a pro cricket player, race car driver, and a karate champion, not to mention a world-class lover of the ladies. He also served in the US Navy, fought in the Korean War, and apparently was a commander of a destroyer-class ship at some point. But now he’s a top agent for Intertrust, a secret organization made up of “the four nuclear powers” of the world, its mission to prevent nuclear annihalation.

The Mark Hood series started life in Australia, but what’s interesting is how American it seems. Hood was born on Long Island and relates things to his American upbringing, yet the creators wanted to have their cake and eat it too, thus Hood also comes across as British thanks to his Oxford years. In other words the series appears to be a cash-in on both the James Bond novels and Nick Carter: Killmaster. And indeed author J.E. MacDonnell (aka “James Dark” in the US editions of the series) has a writing style that would be right at home in the world of book producer Lyle Kenyon Engel: pulpy but polished, clearly written in a hurry to meet a deadline, and yet still very professional.

The series ran for 14 volumes* from 1965 to 1970, but only 12 of the books made it over to America: #5: Spy From The Deep (1966) and #13: The Reluctant Assassin (1970) were for whatever reason not reprinted in America by Signet Books. Like Fleming himself, it appears that MacDonnell (“Dark” from here on out, cause it’s a helluva lot easier to type) began the series on reasonably level narrative ground before getting crazier, sort of how Fleming went from the staid (ie boring) Casino Royale to more out-there plots like Dr. No and Thunderball. Later volumes of Mark Hood feature mermen and underwater cities (#8: Operation Octopus) and even voodoo priests turned nuclear terrorists (#11: The Invisibles).

However this first volume, Come Die With Me, is more “realistic” than the series would gradually become. It does set the pace for the following books, though; the novel runs to only 128 pages, but be advised it’s got some small damn print. Hood is given a bit more of an intro than he likely will be in later books; nothing too page-consuming, just an overview of his international education, his military background, and how Intertrust works. Based out of Geneva, Hood reports to, at least this volume, two Intertrust bigwigs, one American and the other British. They give him his latest assignment: head to the Bahamas, where a trio of torpedo boats have been stolen. The atomic torpedos onboard aren’t the real worry; the third boat held a top-secret gizmo that could rattle the free world if it got into the wrong hands.

We’ve already seen the theft of the third boat in the opening sequence of the book. The mastermind behind the nefarious plot is a gaunt, “aesthetic”-faced sadist named Gauss who is a die-hard Nazi and served with Hitler years before. Making off with millions of stolen Nazi loot after the war, he’s now mega-wealthy and lives in a mountaintop fortress forty miles outside of Rio De Janeiro, right overtop the sea. (We eventually learn the torpedo boats are hidden in a cove far beneath his fortress, protected by an electrified cliffside stairway!) Gauss of course wants to start the Third Reich all over again, and plans to conquer the world, but the dude’s no Blofeld; he appears to just have a few henchmen working for him.

The novel has that old-school vibe which the Bond “continuation authors” of today fail to grasp (either due to changing social mores or the demands of their publisher): Hood smokes incessantly, drinks even more, calls women “girls,” and has that casual racism/elitism that was natural for Fleming’s Bond. So then Haitians are referred to as “Negroes,” and racial baiting and taunting is par for the course throughout. And as usual, while this stuff, antiquated and unpublishable in today’s world, is rampant throughout the book, the stuff that is considered okay today – like cursing and graphically-depicted sex – is missing.

And for the most part, so is the violence. Hood, despite being presented to us as a badass, constantly frets over things and tries to keep things from becoming too bloody. His weapon of choice appears to be a .32 automatic, not that he uses it; Hood relies mostly on his karate skills. His intro has him sparring with his karate sensei Murimoto (“the Jap,” per Dark); a glance through future volumes shows that Murimoto will be a recurring character. (Like a true obsessive I’ve already gotten all 12 of the Signet editions – and for a pittance!) Hood gets in his first scrape soon after arriving in Nassau, after quickly figuring out that the mysterious Gauss was likely behind the torpedo boat thefts as well as the murder/kidnapping of their officers.

Gauss has two henchmen: one is named Lott and is a former Nazi Youth (now “Gauss Adult” Hood later reflects) and the other is a “monstrous Negro” named Siboney who can almost decapitate a man with his bare hands. Siboney works as a bartender at a club owned by Gauss, the club in which the Navy officers were last seen, and Hood, there with sexy Prue Balfour, (secretary of Hood’s contact in the Bahamas, the Governor himself), baits Siboney into mortal combat. This is the most brutal action scene in the novel, as Hood uses savage strikes on the hulking thug, crushing his throat and tossing the corpse into the ocean.

But after that it’s all dialog, introspection, and exposition. Hood is quickly caught, drugged, and escorted to Cuba, where Gauss reveals himself and, you guessed it, asks Hood to work for him. As a test he has Hood beat up a “wineshop proprietor” who owes Gauss money or something. From there it’s to Gauss’s mountaintop aerie in Brazil, where he has used his vast wealth to pay off the local government. For a guy with delusions of world conquest, Gauss doesn’t seem very prepared; other than loyal Lott, Gauss only appears to have one or two other guys serving him, one of them a chaffeur/race car driver with a horriying face. This, we’re to believe, is why Gauss is so eager to employ Hood: he needs more men!

Also in Gauss’s castle is the lovely Maria Parana, a Brazilian beauty who works in the lab on the property and has no knowledge of her employer’s plans for global dominance. Maria has a specialty in bacteria research and Hood instantly deduces that she must be working on the “secret weapon” Gauss has been intimating to be in his possession. Sure enough Maria, in between telling Hood how “lonely” she’s been here in the castle, tells him that her new strain of super-bacteria could save the world – unless that is you happen to sprinkle it with certain material. Then it turns in to a goddamn nightmare! Global crops could be ruined…and yeah, she did mention all of this to Gauss, and he did seem interested to hear it, but why do you ask?

Cue the long-expected sex scene which doesn’t even fade to black; it happens between sentences, apparently, as Hood’s leaning overtop Maria’s still-clothed form and the next sentence they’re both smoking post-coital cigarettes. Mark Hood moves fast, baby! At dinner that night Gauss explains that he plans to begin his conquest the next day, so Hood, quickly recounting her employer’s horrible deeds, wins Maria over to his side. Her job will be to fool Gauss into thinking she wants to go into town for shopping but in reality she’ll sneak away to Rio and call the Governor in Nassau, telling him where Hood is and what’s going on.

The finale continues with the suspense angle, with the action still rather low-key; Hood karate-chops the chaffeur, gets in a race with him in which the chaffeur plummets off the cliff, and then he hops on the torpedo boat as it’s coming out of the cove and battles Lott and his comrade. The US troopship isn’t destroyed and Hood ends up launching the boat’s clean nukes right back at Gauss’s castle, killing the villain off-page, as it were. In the end a gloating Lott will inform Hood that poor old Maria was in one of the captured torpedo boats, and thus died along with Gauss when Hood nuked the place. Bummer!

As I finished Come Die With Me, it occurred to me that the book was more like Fleming’s Casino Royale than I realized. Like Bond in that book, Hood starts off the mission experienced but untried, and he too ends up falling in love with the girl (seriously, he and Maria even discuss marriage!). There’s even a shady club from which the villains operate. And like Bond Hood suffers heartbreak and desolation, presumably emerging from his first adventure a changed and hardened man.

As mentioned I’ve got the rest of the series, so while I wasn’t floored by this book I do look forward to reading more of Mark Hood’s adventures.

*The James Dark house name was also used in Australia, and two novels published under this name, The Spy From The Grave (1964) and Operation Jackal (1967), are sometimes listed as part of the Mark Hood series.  I have contacted some booksellers who have copies of these scarce, Australia-only books, and they have confirmed for me that the two novels are not part of the Mark Hood series.
Posted by Joe Kenney at 6:30 AM

According to Wikipedia, Sea Scrape was the US title for The Reluctant Assassin. The series then had 13 titles.

Thanks for the note, Johny, I wasn't aware of that.

I also just discovered that Spying Blind should be placed before Operation Octopus, even though they're listed the other way around everywhere online. At least juding from the publication dates of the Signet editions -- Operation Octopus is copyright January 1968 and Spying Blind is May 1968.

The actual name of the author is J. E. MacDonnell. He was a long running author of naval fiction. His major series characters in his WWII series were Jim Brady and 'Dutchie' Holland.