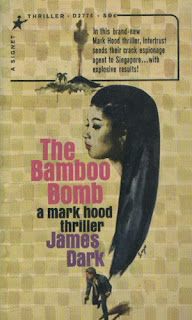 Mark Hood returns for his second adventure, which takes him from Singapore to New Guinea. We join him as he’s already on his mission; it isn’t until nearly halfway through the book that we are informed why he’s been sent to South Asia. Someone in Indonesia supposedly has an atomic bomb, and Intertrust, the agency which employs Hood and is made up of “the four nuclear powers,” wants Hood to find out if the rumor is true.

The Bamboo Bomb moves a lot more quickly than the first volume. Whereas that installment took its time building to an anticlimactic ending, this one moves at a fast pace, hopscotching from one new character and situation to the next. At a snappy 121 pages of small print, the book almost comes off like a series of short stories, as Hood progresses from point A to B to C and etc, with little pause or reflection. That being said the series overall has still not attained the quasi sci-fi vibe of later installments; I’m looking forward to those.

Hood’s cover is that he doesn’t have one; he goes around the globe on Intertrust missions casually giving out his real name. He’s a world-famous cricket player(!) and race car driver, so he plays up the image of a wealthy playboy-athlete. The Bamboo Bomb opens with Hood doing a replay of his “undercover” work from the previous novel: acting like he’s low on cash due to maintaining a lifestyle beyond his means. So now he waltzes around Singapore, acting brash and drunkenly, trying to catch the interests of whatever shady faction is behind this supposed atomic bomb. This bit includes the goofy scene of Hood ordering an extravagant meal and then asking his date, a lovely English lady, if she has any money!

Hood’s “grifter playboy” act succeeds once again, and soon he’s approached by a slim Asian beauty named Telok Li-Chen. Telok (an awesome name) says she’s looking for a strong man, and soon enough Hood’s meeting with her employer, an underworld bigwig named Mr. Tang, who operates out of an opium den. To prove himself Hood must fight two men to the death; he busts out his karate skills in a fight more brutal than any in Come Die With Me. He kills one and renders the other unconscious, and thus passes the test. Meanwhile he tries to put the moves on Telok, which he figures would be like “mating with a snake,” and she seems interested – but Tang says business first.

Next Hood’s on a boat headed across the Strait of Malacca to Sumatra. The two goons on the boat idiotically open fire on a passing British patrol boat. Hood jumps ship, is hauled onto the British boat, and gives the young skipper a bullshit story about being kidnapped. Here we are reminded that Hood was an exec on a Navy destroyer in Korea. He knocks out the skipper and takes control of the boat, which seems pretty hard to buy, but what the hell, it’s late at night and most of the crew is below decks, asleep. But Hood’s discovered once he takes the boat toward the Sumatran shore, and when he jumps overboard he’s shot in the side.

He comes to in a hospital in Sumatra, and due to his own medical background (Hood is if anything one idealized character – the dude has experience in everything) he knows he’s been shot in an otherwise inconsequential section of the intestines(!). He recuperates for a week, after which he’s flown to Indonesia by Tang’s associates; there he meets Ramsuddin, Indonesia’s Minister of Reconstruction and Development (even harder to buy, Hood is familiar with the dude, as his picture is always in the paper…?!). Rasmuddin puts Hood up in palatial quarters, telling him he needs to recover fully and strengthen himself for his mission.

Rasmuddin wants Hood to venture into the jungles of Borneo and assassinate a Malay oil magnate named Tam Chou. Given how arduous this will be, Hood toughens himself up with calisthenics and hardcore karate practice. Meanwhile he gets rubdowns from Rasmuddin’s personal masseuse/mistress, a hotstuff Balinese beauty named Alor. Hood thinks she’s the most beautiful woman he’s ever seen. He even beats up Rasmuddin’s top security goon Subandu for trying to take advantage of her.

The Borneo stuff is yet another in the endless tide of mini-plots; after almost being set up by a wrathful Subandu, Hood makes his rigorous way through the jungle to get to his target. Instead of killing Tam Chou Hood tells him that he’s a secret agent, working against Rasmuddin, and the Malaysian agrees to disappear for a few weeks, to fool Rasmuddin into believing that he’s dead. Hood goes back to Indonesia, a hero now; Rasmuddin even gives Hood pretty young Alor for a night of (off-page) lovin’.

Hood finally gets at his overall objective: Rasmuddin claims to have an atomic bomb, and it’s on Krakotoa Island, which the Minister is currently evacuating. In fact, Rasmuddin wants Hood to go see the bomb and then write about it, so the whole world will know for sure that Indonesia has the A Bomb. Turns out they really don’t, though; when graced with a nighttime visit to Krakatoa, Hood sees a bunch of crates filled with TNT lying around, and Rasmuddin points out some uranium being transported to the site. Hood quickly deduces the Minister’s plan: he’s going to blow up all this TNT, which will disperse the small amount of uranium, and that coupled with Hood’s own article will be enough to convince the world that Indonesia has an atom bomb.

Our hero has about as much finesse as Sean Connery’s version of Bond; he knocks out a few guards, throws some TNT down a cliff, and then runs like hell while everything explodes. He commandeers yet another craft and escapes, injured in the process and almost hallucinating by the next morning, adrift on the ocean. Then a boat filled with Tang’s men chases after him and Chiao, Tang’s massive henchman, a “professor” of kung-fu, boards the boat. Hood knows that despite his expertise with karate he’d be no match for Chiao, so he whips out his gun and shoots the dude a bunch of times!

And that’s that; Hood is rescued by the same British skipper he kidnapped earlier in the tale, and he figures in all the action Rasmuddin probably died(!). So once again we have sort of an anticlimax, I mean all the characters from early in the book are just forgotten. Hood never goes back to take care of Tang or to even act on Telok’s open offer for sex; rather, the novel comes to a quick close, James Dark once again hitting his word count and saying to hell with it. But the guy’s such a skillfull pulp writer that you can’t complain; I really enjoyed the book.

Come Die With Me ended with Hood losing the lady he had fallen in love with, killed by a nuclear missile strike Hood himself had caused. Dark implied that this would change Hood, make him colder, and that seems to play out in The Bamboo Bomb, though very subtly. For example, early in the book Telok caresses Hood’s hand, and Dark writes that “Hood felt nothing.” At any rate we learn a little more about Mark Hood this time: for one, his age is given as 32 (I know a future volume says he’s 36, so it looks like he ages as the series progresses), and he was an exec on a Destroyer in Korea, after which he served in Navy Intelligence for a few years.

James Dark (aka J.E. MacDonnell) displays his usual cultural sensitivities throughout: “[Hood] judged him to be Malay, but he might have been Indonesian or Filipino, they all looked the same.” And Murimoto, Hood’s karate instructor (unseen this volume), is again referred to as “the Jap.” Also many mentions of the “little brown men” Hood towers over as he gallivants around South Asia. But Dark keeps the story moving, with less of the padding or stalling of the previous book, doling out his pulpy tale with panache.

Humorously enough, Signet appears to have confused the (ghost)writer with the protagonist: the back of the book proclaims James Dark as the “hero spy” of the previous novel.
Posted by Joe Kenney at 6:30 AM