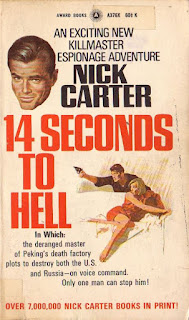 Jon Messman’s first contribution to the Nick Carter: Killmaster series isn’t as great as his masterpiece The Sea Trap nor is it as middling as his later entry The Executioners. At the very least the guy hits the ground running, with Nick Carter getting lucky within the first twenty pages and scoring his first kill in the first fifty. Messmann answered an ad series producer Lyle Kenyon Engel placed in the New York Times, seeking new ghostwriters, and he went on to deliver thirteen more installments.

Like many of the other early Killmaster novels, 14 Seconds To Hell has Nick going up against the Chicoms, ie the Red Chinese. In fact he’s already on assignment in Hong Kong when we meet him, sent here to Asia by boss David Hawk to take down Dr. Hsu Fan, a fanatical Chicom scientist who plans, without his government’s blessing, to launch an atomic attack on both the US and the USSR. Given the threat to Russia, Moscow has sent in its own agent to assist Nick, and who will be surprised when it turns out to be a super-hot blonde babe with a phenomenal bod?

Her name is Alexi Lubova and, promptly after meeting Nick, she takes him back to her shack in the “rooftop people” gutter section of Hong Kong and proceeds to bang the holy hell out of him. Already with his first volume Messmann displays how his sex scenes are a bit more graphic and descriptive than his fellow ghostwriters, though to be sure it’s not exactly hardcore porn or anything. We do get the memorable tidbit that Alexi thrashes around in such enjoyment that Nick’s afraid she’s about to knock over the shack! And, just as in a similar instance in The Sea Trap, Messmann proves he’s not above back-to-back sex scenes, with Nick and Alexi exchanging a few lines of dialog before going right back at it again, banging away on those poor shack walls.

Surprisingly enough, Messmannn proceeds to write yet a third sex scene, when Nick and Alexi meet again the next morning in Nick’s hotel room; but this time Nick notes how Alexi, rather than thrashing about, has a “quiet, intense purposefulness” about her during the humpin’. This continues for a while, Nick and Alexi meeting up either at her place or at Nick’s hotel, trading brief dialog about the assignment in between all the banging, and the gal’s either thrashing crazily or being all “quiet” and “intense,” and Nick’s getting confused. But one thing that can be said about Alexi is she can handle herself; when a Chinese official tries to take her off for questioning, she quickly kills the guy with some fancy martial arts moves.

Gradually Nick finds out the surprise reveal – ruined thanks to the back cover copy – that he’s actually working with a pair of twin spies! Alexi is the thrasher and her twin sister Anya is the quiet one – for Nick has discovered this is the one true way to tell the ladies apart. (And by the way, Messmann does not go all the way with it and write a scene with Nick entertaining both girls at once, though he does have Nick wondering what it would be like!) Now that all that’s gotten out of the way, it’s time to get on with the mission.

The middle half is a bit slow, with Nick and the sisters finding their contact on a Chinese junk has been compromised (another brief action scene with both Alexi and Anya taking out some Chinese soldiers) and thus having to figure out how to get over to the Chinese mainland. They steal a junk, get to the mainland, steal a convoy truck. Along the way Messmann delivers a great scene where the trio is spotted by a Chinese boy and Nick demands that they catch “the little bastard” because in Commie China everyone’s a government spy. They track the kid down to a shack in the middle of nowhere, just the kid, his mom, and his dad, but the dad’s already high-tailing it to the village center to report the three foreigners.

Nick chases him down and a brutal fight ensues, the farmer going at Nick with a scythe. Nick kills him, goes back to the shack – and says they have to kill the kid and the mom, too. The girls are of course appalled, and Nick thinks to himself this is another reason why there should be no female secret agents; their maternal instinct gets in the way of the cold-bloodedness sometimes required of the job. Yet the girls know Nick is right; the kid and mother could blow their whole mission and millions might die as a result.

This sequence, brief but tense, is more powerful than any modern spy movie, where the protagonists go out of their way to avoid collateral damage and whatnot – for example, my wife watched this stupid summer TV show called The Whispers, which featured several “emotionally gripping moments” where the male and female FBI protagonists kept trying to prevent various alien-controlled/world-destroying children from getting killed. Yeah, right!! But anyway, Nick opts to interrogate the mom and son separately, and given they both deliver the same responses, he decides to spare them – tying them up and throwing them in a cellar.

Dr. Hsu Fan resides in a remote fortress in the hinterlands of South China, where he has seven nuclear warheads ready to launch on America and Russia. AXE has given Nick a can of shaving cream that disassembles into seven miniature atomic bombs; he’ll use these to blow up each of Hsu Fan’s rockets. But when he and the two women sneak onto the base, they’re spotted and these strange metallic discs come up from the ground and spray the compound with knockout gas. Nick wakes up, nude and bound, Alexi and Anya bound and nude beside him. Here they meet Dr. Hsu Fan, who comes off exactly like Dr. No, only without the metal hands.

Around page 100 things get real insane. This tech wheels in an EKG-like machine and hooks up electrodes to Alexi and Anya’s nipples, then insert a phallus-type gadget into each of them. My friends, it’s an orgasm machine, and Dr. Hsu Fan happily reveals how he is a believer of “exquisite pain” instead of old-fashioned torture. A person can steel himself to withstand torture, but when it comes to pleasure he or she might find his defenses lacking. In short, this orgasm machine will give a woman the most powerful climax she’s ever had…again and again and again. It goes from ecstasy to misery.

To prove this, the sadistic doctor takes Nick into his veritable chamber of horrors: a room containing caged women, each of whom were tortured by the machine. They’re now each mind-shattered wrecks, pitiful, destroyed things, and it’s not only all so wonderfully crazy and bizarre but it’s also a precursor to the similar scene of the caged, maddened women in The Sea Trap. Nick, coming to the obvious conclusion, realizes Hsu Fan is an “unholy, perverted sonofabitch,” and was likely spurned by a Western woman, hence his hatred of them – the majority of the women in here are white, and the doctor shows special relish in torturing Alexi and Anya.

We get to see the orgasm machine in action, the two sisters quickly reduced to shuddering, gasping, climaxing misery. Nick knows they’ll go nuts if the machine isn’t turned off, and Anya’s already showing signs of losing her mind. Nick plays like he’s in love with her and pleads with Hsu Fan to stop the torture, giving him a bullshit story about the three of them just being sent to see what’s going on here. Per tradition Hsu Fan buys it and tosses Nick and the two women in a shack, rather than just killing them; he wants Nick to watch as he launches his seven warheads the next morning, as a veritable final slap to the face of the West or something. And who will be surprised when Nick soon turns the advantage to himself?

Dr. Hsu Fan is almost perfunctorily disposed of; after voice-activating his planted charges the next morning, destroying the missiles before they can launch, Nick then dispatches the sadistic doctor with a Chinese broadsword. Unfortunately, there are about thirty pages still left to go. The final quarter of 14 Seconds To Hell is composed of a long chase sequence, as Red Chinese soldiers scour the countryside in search of Nick and the two women, both of whom are still frazzled from the ecstasy-torture. When all hope seems to be lost, the army surrounding them from all sides, help arrives from the most unlikely source – the kid Nick was going to kill!

In a complete bullshit copout, the kid shows Nick and the sisters a hidden way out into the ocean, saying that now “the debt is repaid,” as Nick could’ve killed him but didn’t. That Nick killed the kid’s dad is conveniently overlooked. A US sub picks them up and takes them to safety. Now Nick’s big concern is making sure Alexi and Anya can completely recover. Anya is going back to Russia, but Alexi wants to stay in the US; Hawk hooks them up with a posh suite in a New York hotel and Nick devotes his entire being to giving the gal some good lovin’ to help her recover.

Anyway, this was another fun, quick-moving installment, and this is becoming one of my favorite series.
Posted by Joe Kenney at 6:30 AM

The rooftop people is apparently a real thing. I was curios so I googled it.

What is it with men's adventure and orgasm machines?