The Aquanauts #3: Seek, Strike And Destroy 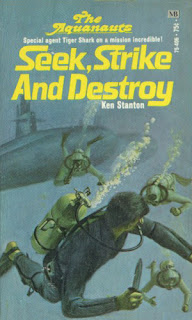 Manning Lee Stokes turns in his third installment of The Aquanauts , and for the most part it’s as slow-moving as his first. Boy can this guy pad out the pages, and Seek, Strike And Destroy features padding of the worst sort. You know you’re in trouble when the first chapter is given over to an endless sequence featuring a newlywed couple on their honeymoon – a couple who only appears in this opening chapter – complete with long digressions on their history together and plans for the future and etc.

They stop off for some quickie sex in a ghost town near Death Valley, Las Veagas, only for a friggin’ missile to land nearby. It doesn’t explode, lodges there in the ground, and it has Chinese writing on it. Gradually we’ll learn that this is a nuclear missile, fired from a Chinese nuclear submarine, built identically to the top-secret US Polaris sub. The Chinese sub, off the California coast, is quickly sunk (off page) and now it’s up to Admiral Coffin of the Secret Underater Service to make sure the Chinese do not discover that their nuclear sub has been sunk but also to ensure that the US public doesn’t find out a Chinese sub was right off the US coast. Also he’s to destroy whatever other Chinese nuclear subs might exist.

Meanwhile our hero Tiger Shark is testing out the Paranauts initiative, aka Operation Deep Six, a page-filling gambit on Stokes’s part if ever there was one: another idea of Coffin’s, the “Paranauts” concept is basically parachuting a geared-up scuba diver into the sea. Why exactly this would even require a service name, or what in particular the Paranauts would do that the regular Tiger Sharks couldn’t do, is something Stokes doesn’t explain. What makes it all even more unintentionally humorous is that the Paranauts thing is just brushed under the narrative carpet and not mentioned again. And it’s not even the most action-themed entrance for our hero, if that was Stokes’s intention: all Tiger does is parachute into the ocean and swim around.

Stokes retains his usual glacial pace; it takes fifty small-print pages for Tiger to even get in his high-tech, top secret KRAB submersile and go look for the downed Chinese sub. Meanwhile we must endure so much tedium. Every few chapters breaks over, as has become customary for the series, to Admiral Coffin and his superior dressing in “mufti” and meeting secretly in motels to discuss top-secret stuff. But rather than being gripping or even revelatory, these scenes are slow as molasses, with Stokes detailing every lighting of a pipe or sipping of gin, the two old men going on and on and on about what have you, and usually it’s shit we already know!

It occurred to me that Stokes could’ve made some money on the side by offering a correspondence course on pulp paperback writing. “This month’s lesson – Padding: How to Meet (And Exceed!) Your Word Count.” I’ve said before that I do appreciate Stokes’s style, but there are times where you wish he’d put down the bottle of booze and think up a quality story instead of just banging aimlessly at the typewriter. But as it is, so much time is wasted on inconsequential things and dialog exchanges that go nowhere. And again Tiger himself (“Tiger” being the main way Stokes refers to his hero, whose real name is William Martin) is lost in the narrative quagmire.

But then, as is typical of Stokes, there will be these bizarre incidents that come out of nowhere, jolting the reader out of his stupor…like when Tiger has to knock out a sexy Communist agent by screwing her with a narcotic-laced French Tickler!! The lady is Madame Hee, but despite the name she’s actually Russian; in long backstory we learn that she was born in Russia around 1910 or thereabouts and married a Chinese officer or some such in the ‘20s. Now she lives in San Francisco and acts as the prime gatherer of spy intel for Peking; Admiral Coffin and the Feds are concerned she’ll somehow get wind of the sunk Chinese sub and let her superiors know.

And yes, Madame Hee was born around 1910, meaning she’s “pushing 60,” give or take a few years. Yet, the Feds ensure Coffin and Captain Greene (Tiger’s main contact in the SUS), Madame Hee doesn’t look a day over 40, with most men thinking she doesn’t look over 30. And she’s got a helluva nice body, “a body they could use in the Playboy centerfold.” Plus she’s a nympho who is only “interested in big cocks and staying power.” The sexually-aggressive older lady with the looks and body of a much younger woman is a recurring theme in Stokes’s work; see Gerda von Rothe in The Golden Serpent and Queen Beatta in The Bronze Axe. And like Gerda von Rothe, Madame Hee’s even a wealthy owner of a cosmetics emporium.

In one of the novel’s few intentionally-funny moments (Stokes as usual playing things straight…a little too straight), Greene insists that Tiger not be told how old Madame Hee really is; there follows a few humorous bits where a CIA agent almost slips and mentions that Hee is 60 or so. Anyway Tiger poses as a sort of country bumpkin, which we’re informed at great length is Madame Hee’s type, and saves her from a staged mugging in a park. She takes him back to her place to patch him up and the lurid hijinks ensue. First she gives him a blowjob straightaway, which nearly blows Tiger’s mind. Then she orgasms after a little dry humping(?).

Then it’s out with the ol’ French Tickler, which Stokes only now bothers to inform us is the entire key to this whole sordid puzzle; the SUS brains have coated it with a diluted extract of Puffer Fish poison(?!), and all Tiger has to do is fuck the lady with it and within fifteen minutes or so she’ll be out cold. And I should mention that Stokes gets fairly explicit here, more so than he did just a few years before in the aforementioned Golden Serpent. This is also the first sex scene in the book, nearly 100 pages in – and also, believe it or not, it’s not until here that we have our first action scene, as a muscle-bound hulk comes into Hee’s place while Tiger is searching it.

A knock-down, drag-out fight ensues, one in which Tiger is practically beaten to a pulp. He endures a beating that would faze even Gannon, yet manages to finally overcome his opponent, fracturing his skull with Hee’s telephone. But by next chapter Tiger’s good as new, about to parachute into the China sea, where KRAB waits for him in the waters below. It’s like a week later and Tiger’s been in the hospital.  Admiral Coffin has gotten in touch with some revolutionairies in China who know where the nuclear submarine pens are. Tiger’s mission now is to meet up with a member of the revolutionairies and destroy the subs.

The underwater stuff you’d expect of the series is underplayed, with only a few brief scenes of Tiger either “finning” around the sea in his high-tech scuba outfit (we learn here that he wears a self-contained helmet on his dives, by the way) or hanging out in KRAB while wearing nothing but shorts and a pair of moccasins (Tiger’s preferred KRAB attire, for some reason). He’s got time to kill before meeting with the revolutionaries (because, of course, Stokes himself has many words to kill before he meets his requirement), so he goofs off; here Stokes inserts a bit of his trademark in-jokery:

[Tiger] read a paperback until he could no longer keep his eyes open. As his jaw slackened and his head nodded he wondered where in hell the writers got their ideas. Some of them, the writers themselves, must be pretty weirdo.

More jokery ensues when Tiger swims onshore to meet his contact and has to hide in a rice paddy, fertilized with human shit, as a guard patrol walks by. One of them even takes a piss right over where Tiger is submerged in the foul murk, unseen by them. But who will be surprised when Tiger’s contact turns out to be a young and pretty Chinese woman? Her name is Mary Liu and she meets Tiger in an effectively-rendered scene in the abandoned “Temple of Dogs” which overlooks the sea.

Mary has been carrying on an affair with the General in charge of the nearby submarine complex and has gathered enough info on him and the complex to help Tiger destroy it. Much, much time is wasted on the General’s entrance and Tiger’s subterfuge, pretending he is a Russian here to buy nuclear subs from the Chinese. Finally Tiger kills the dude, and here the novel gets weird again. Stokes, perhaps having watched an episode or two of Mission: Impossible, now has Tiger pull out a latex mask fashioned after the dead General’s features and put it on, along with the General’s uniform.

Pretending to be drunk, as was the dead General’s wont, he heads to the General’s house in the nearby sub complex, which is built into a hollowed-out volcano over the sea, Mary along with him. But when a jealous Colonel who has long sought to usurp the General comes in on them, Tiger and Mary pretend to have sex on the bed (while still clothed) while the Colonel watches them(?!), until Tiger finally rolls over and blows him away with the lady’s .25 caliber. What is there left to do but drag the bloody corpse into the shower and then have sex all day?

Stokes skips the details but he does decide, for no reason other than general sadism, to gut us readers: Mary, who Tiger finds himself falling for, has come on this mission knowing it’s suicide for her. Tiger will be escaping by the sea once he destroys the subs and he only has air tanks for himself. Mary has taken the job knowing she will die with its success. Tiger spends all day wondering how he can get her out safely, even if it isn’t part of his orders. He finally gets Mary to agree to go with him – only for her to then reveal she’s taken her suicide “L-pill.” She dies in his arms, telling him it was the right thing to do.

Tiger is devastated – but only for a sentence or two. Humorously, Mary is plain forgotten by the next chapter, which has Tiger in scuba suit and helmet sneaking around the sub complex and knifing Chinese guards. Then it’s into the drink to swim around and plant explosives on the fifteen nuclear subs in the pen. Ten pages remain in this seemingly-endless novel (which is actually only 192 pages long – but with the usual super-small print), and only now are things truly happening. But that’s Manning Lee Stokes for you. Four pages from the end we’re graced with the incident depicted on the cover: Red China frogmen in white wetsuits attack Tiger. He takes them out in a few paragraphs.

It’s funny how Stokes charges through the finale, realizing he’s about to hit his word count. The frogmen disposed of, Tiger plants his bombs and swims for KRAB. He just makes it in time for the explosion, which rockets the little sub out of the ocean. Turns out there must’ve been some live atomic warheads on one of the ships Tiger just blew, and an atomic cloud rises in the distance. But there’s only a sentence or two left so Tiger sits back in one of the KRAB’s “contoured seats” and that’s that. So then, all the good stuff was rushed through in about ten or so pages. If Stokes had spent more time on that than inessential bullshit, Seek, Strike And Destroy would’ve been a lot of fun.

But that’s Manning Lee Stokes for you.
Posted by Joe Kenney at 6:30 AM