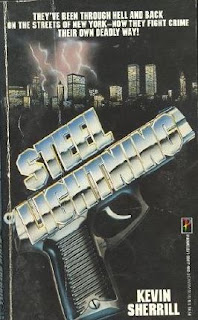 One of the more obscure men’s adventure series continues with Steel Lightning, the second installment of an un-named, un-numbered series that began with Midnight Lightning. I’ve decided to call this series “Steel Lightning”, given that the third and final volume retains this name, but for what it’s worth the series protagonists refer to themselves as “Street Machine.”

Whatever the name, Steel Lightning was a chore to get through. At 302 pages of smallish print, each and every page packed with dense blocks of paragraphs, it was an uphill struggle. Once again Kevin Sherrill, apparently a real person, crushes forward momentum with constant backpedalling, inconsequential digressions, repetitive situations, and, this time at least, lots and lots of racist invective. A book like this would cause the mollycoddled college students of today to walk out in protest and their spineless president to resign. It’s hardcore stuff, but honestly just as goofily over-the-top as the sort of shit David Alexander wrote in Swastika.

It comes courtesy the villains of the installment, a group of neo-Nazis operating out of Alphabet City, one of the (then) more dangerous sections of New York. (An irony about this series is how it’s predicated on the rampant and growing crime rate in New York, whereas in real life the ‘90s saw such a dropoff in crime that New York is now considered one of the safest places in the country to live. Wait, maybe that was thanks to the efforts of the Street Machine!) The neo-Nazi scum leader is Niles “Psycho” Dorfman, and he himself reports to a mysterious, never-named bigwig who calls all the shots. Sherrill keeps the bigwig’s identity secret for a “surprise” reveal you can see coming miles away, but meanwhile the back cover copy blows the entire secret, anyway – it’s really a politician who is campaigning for mayor named Rolf Deverak.

Psycho’s crew is the same who caused Street Machine member Moses White so much grief in the first volume, shooting him and leaving him for dead. Moses’s vengeance was left unquenched by the end of that first volume, and I see now why: Sherrill likely planned to center each installment around a specific team member’s revenge. The first volume (gradually) got around to the vengeance of Brian Benson, who had been burned to a crisp by a trio of sadistic bikers. All that was six or so months ago, and when we meet them this time around the Street Machine is busy taking care of business, taking out a crack manufacturing plant in New York.

Speaking of David Alexander, Sherrill again comes off very similarly to the guy, to the point where I again wonder if Sherrill and Alexander were one and the same. But if so, this is a toned down Alexander, for Sherrill only delivers a handful of action scenes. When he does, though, he goes full-blast, with plentiful chaos and gore, and he also shows a penchant for the goofy alliteration Alexander specializes in. And yet for all that, so much of this book is comprised of boring chaff that I figure there’s no way it could be Alexander; 90% of this fat book is a flat-out bore, where hardly anything happens other than constant and repetitive declarations of bad-assed intent from the various members of Street Machine.

Also, Sherrill does himself no favors by, once again, referring to his sundry characters by a variety of names in the narrative. God, this is confusing as hell. Psycho is referred to as “Psycho,” “Niles,” and “Dorfman” before we are finally clued that Sherrill’s only referring to a single character. Likewise the Street Machine heroes are arbitrarily referred to in the narrative by either their first names, last names, or nicknames. Team leader John Dinatale is probably the worst recipient of this confusing mish-mash of narrative naming, sometimes “Dinatale,” sometimes “John,” sometimes even “J.D.”

Anyway, this opening action scene is appropriately chaotic, but not only is it over way too soon but it’s also one of the very few action scenes in the novel. The Street Machine members hop in their armored Ford panel truck (which Sherrill refers to as “the war wagon,” lifting the concept from Don Pendleton) and escape the cops who are finally rushing onto the scene. Dinatale’s concern that his team will one day be captured by the police is almost realized in Steel Lightning, particularly thanks to an old enemy of Dinatale’s on the force, who has been given orders to find out who is behind this group of guerrilla vigilantes and to bring them all in.

From here the novel stalls for about two hundred or so pages. I thought the previous volume was slow-going, what with the tedious amount of time devoted to the various backstories of each character, as well as the forming of the team, followed by their endless training by Dinatale…I mean you’d think with all of that taken care of, Sherrill could get with the action and gore and have the Street Machine busting heads all over NYC. But no. Steel Lightning is even slower-going than its predecessor, comrpised mainly of the main characters sitting around and flashing back to this or that event, while re-affirming their intent to sow vengeance, the law be damned.

I should give Sherrill the benefit of the doubt, though. My assumption is some editor at Pinnacle/Zebra told him to “elongate” his manuscript (to quote the still-hilarious “Carsenio” skit from SNL). At this point Zebra owned the Pinnacle imprint and Zebra was known for men’s adventure books that were well beyond the page length of the genre norm. Maybe Sherrill’s manuscript suffered from this. Where Steel Lightning should blast full-tilt from first page to last, it instead just treads water, mimicking the first volume in how it’s so listless throughout until finally cutting loose in the very last pages.

There are a few highlights. For one Dinatale’s team gets in an endless chase with the cops, who spot them heading onto the job in their armored Ford truck. While it should be exciting, this sequence just keeps going on and on and on, with Dinatale steering the trusty old Ford through the back alleys of Manhattan until he successfully loses the tail. Then there’s a gruesome, over-the-top sequence, again reminiscent of the work of David Alexander, where Psycho and his Nazis massacre a bunch of people in Chinatown, making it look like a hate crime perpetrated by blacks (they even wear blackface as part of the ruse…!). Sherrill even devotes an entire paragraph to the paths of various bullets as they slam through a pretty young Chinese woman.

Speaking of women, Psycho’s crew has some veritable neo-Nazi She Devils in it, though they’re nothing like their pulpier forebears in the old men's mags. These ones are scurvy, gross harlots with likely poor hygeine; one of them, Heidi, has the pulpy aspect of a swastika tattooed between her breasts, with an SS tattooed on each nipple, but she’s such a nonentity of a character you barely notice her. She, like the other few girls, devotes slavish attention to Psycho, usually reprimanded, beaten, and raped by him for the most minor of infractions. However it must be said that Dinatale, toward the finale, apparently rapes Heidi to death in order to get some desired info out of her.

Sherrill is at pains to make John Dinatale seem more unhinged and sadistic than the worst “slags” in all of New York (“slags” by the way being a word repeated about a billion times in the novel). Raping a neo-Nazi chick to death (off-page or not) is just one indication of this; hell, Dinatale’s live-in girlfriend is specifically stated as being a teenager. And she brings over another teenager, also a former hooker, and Dinatale bangs ‘em both at the same time. (This too happens off-page; in fact all the sex happens off-page in this volume.) Throughout the novel Dinatale keeps swearing bloody vengeance, and when the shit hits the fan in the final pages he murders neo-Nazis whether they be male or female, armed or unarmed. Some hero.

Meanwhile Barbara Cohen, the Smurfette of the group, is growing feelings for Dinatale, wondering if he’s going to be the stud who gets her off the lesbian bandwagon she jumped on after being raped and tortured in the previous volume. Barbara as we’ll recall is a former porno actress turned model turned rape victim turned District Attorney’s assistant(!!), and she’s getting a case of hot pants for Mr. Dinatale. But this subplot, as interesting as it is, is just another that Sherrill stretches to the breaking point throughout the novel, with nothing resolved by story’s end. By the finale of Steel Lightning Barbara has basically decided that she’s going to tell her girlfriend to take a hike so she can bang Dinatale.  Or will she?

Sadly, this soap operatic bullshit is more interesting than the meat of the tale. As stated, for the most part Steel Lightning is just endless scenes of the various members of the Street Machine stating their vow to fight crime, regardless the cost, while abritrarily cutting over to Psyscho or Deverak spouting racist vitriol. When things do promise to happen – like Moses’s wife accosted by Psycho and gang – it instead leads to a heated argument within the Street Machine, Moses wanting vengeance asap and Dinatale telling him he’ll get vengeance when Dinatale say’s he’ll get vengeance.

Why they don’t barge down Psycho’s doors and blast him and his goons away is obvious: Sherrill has several thousand more words to go before he meets his requirement. Instead it’s back to the stalling and delaying; finally Dinatale orders the troops in when Moses’s wife is abducted. After a gory fight in a neo-Nazi bar, Dinatale corners Heidi, swearing he’ll get the info out of her while screwing her…to death. Next chapter and Dinatale knows where Moses’s wife is being held, and he also intimates that Heidi is in fact dead, so good gravy who knows what happened there. More importantly, the insanity promised by the cover is finally about to be unleashed.

The gun-porn also returns with copious descriptions of the various firearms the team uses. The big, long-awaited action scene sees the Street Machine assaulting Psycho’s headquarters in Alphabet City, machine guns blazing. However there are more neo-Nazis here than expected, so the team is quickly outnumbered. Barbara and WWII vet Joseph Vernick are both shot, though protected by the “Kevlar underwear” Dinatale insists the team members wear. Moses, himself injured, manages to free his wife, but wouldn’t you guess it – Psycho escapes.

Humorously, having gone most of the novel without any action, we are graced with another action scene immediately after this one; Dinatale finds out where Deverak has his secret neo-Nazi meetings, and he and the team grab a bunch of frag grenades and head there. They blast away yet more Nazi scum, and Psycho and Deverak are shot about fifty times each in the melee. It’s at least a memorable finale, but good grief did it take forever to get there.

Steel Lightning could’ve been a rollercoaster of a ride, but it’s just a boring digression. Let’s hope the next volume, which was to be the last, improves things.
Posted by Joe Kenney at 6:30 AM

The level of schlock makes me miss working in a used bookstore. If you haven't found it yet, check out the Wingman series. It's the best thing Zebra put out.