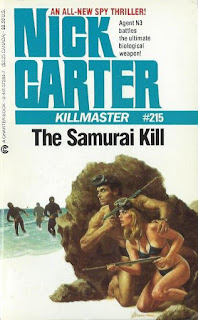 I bought this installment of Nick Carter: Killmaster fresh off the racks of a Waldenbooks store in the summer of 1986; I was 11 at the time and I was in the grip of Bondmania. I was in the process of reading the Ian Fleming 007 novels and had read all of the then-new “continuation” 007 novels by John Gardner (and I’m unashamed to admit that I actually preferred the Gardner books as a kid!), so I was on the lookout for more spy action. Also, the cover likely drew my interest due to the presence of ninjas.

I’m sure I started The Samurai Kill, but I know I never finished it. I think I put it aside because the opening sequence was too strange for me at the time, and also likely I was overwhelmed by the fact that this was volume 215 of a series; would I be totally out of my depth having missed the preceding 214 volumes?  (Likely one of the reasons Jove Books later decided to make the volume number a lot less prominent on the cover.)  Little did I know at the time how free-flowing this series was, with an army of ghostwriters turning out adventures with hardly any sense of continuity. Also, reading the book now, the weird opening is right up my alley. In short, The Samurai Kill is firmly in the far-out realm of the Killmaster universe, very much along the lines of the later Deep Sea Death, complete with mutant seaweed, underwater cities, and high-tech underwater gear that could come right out of The Aquanauts.

Apparently this one was written by Dennis Lynds, a veteran writer more known by his Michael Collins pseudonym (under which he wrote about detective Dan Fortune). He delivered several Killmaster novels, starting in the ‘70s, and if this one is any indication he would’ve been right at home in the early years of the series, when Lyle Kenyon Engel was producing. Lynds has the same writing style as those early Engel ghostwriters and isn’t afraid to get way out there while still making it all seem realistic (to a point). There’s also a definite sense of fun, which is to say there’s none of that dour, overly “serious” vibe you get from series ghostwriters like Jack Canon (ie Blood Raid).

One difference between this and the series installments from two decades before is a heavier focus on action, as demanded by ‘80s men’s adventure pulp. In fact The Samurai Kill opens with action, as Carter and his latest bedmate, sexy Australian secret agent Siobhan O’Neill, are attacked while scuba diving near Kwajalein, an atoll deep in the Pacific. Speaking of Siobhan, an interesting note is that she’s never described! This is the first time I can think of where a Killmaster author never once tells us what the main female character looks like – no details on her hair color, eyes, anything. We are of course informed she’s got a great rack, but hell, that’s a given. Anyway the great cover painting by George Gross will have to suffice.

Carter and Siobhan are attacked out of nowhere by a squad of frogmen in black wetsuits, frogmen who aren’t wearing air tanks. A pitched underwater battle ensues; luckily Carter and Siobhan brought along their spearguns. It’s like the finale of Thunderball in miniature and a precursor to the vast amount of underwater action in The Samurai Kill; Carter spends most of the novel in diving gear, swimming around the Pacific, getting in various battles. This isn’t a complaint, as I’ve always been interested in scuba stuff, especially when it’s combined with spy hijinks…likely from watching Thunderball (which is probably another reason I bought this book as a kid, as I’d recently seen that film for the first time and wanted more of the same).

These weird scuba dudes have come from a high-tech submersible that doesn’t look like anything Carter or Siobhan have seen before. It gets even more sci-fi when a gravity field expands from the ship, pulling the attackers back inside, and Carter and Siobhan along with it. They can’t escape and their air tanks are running out. This is a tense scene in which Siobhan saves the day, realizing it’s the metallic tanks that are pulling caught in the gravity field. She and Carter escape and find themselves on a desolate atoll, where they of course have sex all night. Speaking of which, Lynds is more so in the lyrical mode when it comes to the purple prose; Carter and Siobhan screw a whole bunch, but rarely if ever do we get any of the naughty details.

Carter’s here near the Marshall Islands because there have been sightings of underwater flying objects and many locals have gone missing. In addition to the frogmen and their strange craft, Carter next discovers a rampant outbreak of vegetation taking over the coves, mutant seaweed that grows phenomenally fast. Even worse, it’s poisonous, instantly killing anything that touches it. Carter and Siobhan are certain this stuff is connected to the strange frogmen and their underwater craft. Speaking of which, those frogmen are what’s depicted on the cover; turns out they aren’t ninjas, after all. That’s just how their scuba outfits look. In fact there aren’t any ninjas in The Samurai Kill; the 11 year-old me would’ve been bummed!

The seaweed grows more rampant, killing natives and even destroying a nearby Soviet spyship. Carter and Siobhan, who turns out to be like a female version of the Killmaster, venture around the various islands, researching clues, getting in frequent battles with more wetsuited goons, and of course having sex. There’s another long action sequence, this time featuring Carter going up against the mysterious frogmen alone, which takes place on a golf course. This frogmen army turns out to be comprised of both men and women, from various countries, but Japan keeps turning up in the investigation; eventually Carter determines that the mutant seaweed is the product of a chemical research factory outside of Tokyo.

The focus on action really picks up the middle half, which is otherwise bogged down in too much dialog and redundancy; Carter keeps getting off on one-upping the stolid commander of the US base in Kwajalein, as does Siobhan. But before they leave for Tokyo Carter and Siobhan are again attacked by an assault team of frogmen, which leads to a pitched battle on the army base. Then Carter’s plane explodes on the flight to Tokyo, but he’s able to bail out, just like in the old G.I. Joe cartoon. Siobhan survives too, however we get lots of worry from Carter’s perspective when he thinks the woman he was “just inside of” a few hours before might be dead(!).

Carter and Siobhan’s Tokyo investigation eventually leads them to a research center off the coast where the mutant seaweed was created, but thought to be destroyed. When going to interview the widow of the seaweed’s creator, the two are attacked by samurai. This finally is the introduction of the main villain: Fujiwara, last descendant of the ancient ruling power of feudal Japan, who not only wants to rule the country again but also wants to wipe out humanity and start over again. He plans to infect the world’s oceans with the seaweed, causing the gradual death of everyone on the planet, save for the select group of people who will live…in Fujiawara’s massive underwater colony!

The Samurai Kill gets more and more sci-fi (and again more like Deep Sea Death) as a captured Carter and Siobhan are taken to Fujiawara’s domed city beneath the sea, in which a thousand or so people live. But talk about not reaping the potential. Carter’s in and out of the place within a few pages. Even worse is the lame, last-minute copout of Siobhan going turncoat and deciding to join “the bad guys.” Why? Because she thinks Fujiwara’s all man and stronger than even Carter and she wants to serve beside him. It’s all pretty hard to buy; honestly, Siobhan’s decision to suddenly go evil just comes out of nowhere. At first I thought it was just a ruse on her part, but nope, she stays evil until the bitter end.

The finale continues with the action focus, but rather than taking place in the underwater city (which would’ve been cooler) it instead takes place in a high school(?) on Kwalajein. It’s all like a summer blockbuster as Carter goes in, guns blazing (there’s more of a focus on guns here, too, again befitting it’s mid-‘80s publication), freeing the captured US soldiers and killing legions of wetsuited goons. The climax sees Carter and Fujiwara going at it with samurai swords while Siobhan stands by watching. Speaking of whom, Siobhan survives the book, telling Carter she regrets nothing and will no doubt cop a deal and go free; Hawk later confirms this, saying Siobhan will likely live out her years on a nice pension.

The spy-fy gadgetry of the early years is also here, in particular a pressurized, scuba-ready plastic suit Carter gets from AXE and smuggles into the underwater city beneath his clothes, conveniently enough. Pierre, the gas bomb he straps to his “upper thigh,” is used twice, and also interesting to note is that in this volume Carter loses both Wilhelmina, his Luger, and Hugo, his stiletto. But later on he just breaks out a replacement Wilhelmina, which is pretty funny, I mean the dude must have like a crate of Lugers he calls “Wilhelmina” and stilettos he calls “Hugo,” which doesn’t sound psychotic at all. In addition there’s the vast assortment of sci-fi tech at the disposal of Fujiwara, like those self-contained wetsuits his soldiers wear.

This was definitely one of my favorite volumes yet of the series, but I still wouldn’t rate it as high as The Sea Trap or even Deep Sea Death; there was just a bit too much repetition at times, and also given the expanded word count of these later installments a lot of the book comes off as padding. Also Siobhan’s going over to the dark side was lame and insulting to the reader, particularly given how she was basically in love with Carter throughout the book and even saved his bacon multiple times.
Posted by Joe Kenney at 6:30 AM

I haven't read many of the later Nick Carters, but I did read this one (probably because I knew Dennis Lynds wrote it) and remember that I enjoyed it. I've read that his first Nick Carter novel (I think it was TRIPLE CROSS) was based on an unused outline for a Shadow novel he had left when Belmont cancelled that series. The first books I ever read by him were those original paperback Shadow novels, and I loved those.

They do look like ninjas on the cover, plus the word “samurai” is in the title, so it’s not unreasonable for 11-year-old you to think there would be ninjas.

Maybe Lynds didn’t describe Siobhan so we wouldn’t attached to her.

FWIW at least four of the Nick Carter: Killmaster novels attributed to Dennis Lynds were actually written by later wife Gayle Lynds under Dennis's name. As an author who subsequently went on to have a quite successful career in spy fiction under her own name (Mesmerized, her 2001 novel actually has some pretty way out ideas in it.).

The books she wrote were apparently, The Mayan Connection, Day of the Mahdi, Pursuit of the Eagle & White Death.