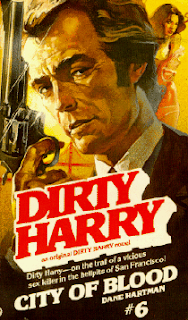 Here’s another series I’ve been meaning to get to. I’ve also never gotten around to collecting all twelve of the volumes in the series, and doubtful if I will, for Dirty Harry is one of those series that’s priced too high on the used books marketplace…I’ve seen some of these offered at insane prices. But anyway this was another Warner Books “Men Of Action” title, and as with Ninja Master Ric Meyers  was one of the writers, though he didn’t write this one.

As typical with this line, it’s uncertain who other than Meyers wrote what. My hunch is that Stephen Smoke, who reportedly wrote Ninja Master #1: Vengeance Is His, wrote this book. Like Vengeance Is His, City Of Blood is saddled with a bland, boring protagonist, bland, boring prose, and overall is quite lifeless, save for a few unexpected moments of sadism; it’s also written in a needlessly-convoluted style, as if the author is constantly tripping over himself. The writing is the definition of perfunctory, coming off with a sort of passive style that is wholly unacceptable for this genre, as I’ll show in an excerpt below.

And yes, you read that right – Dirty Harry is bland in this novel. Dirty Harry! It takes a writer of a certain caliber to make the most famous tough-ass cop of all bland, but Smoke, if indeed it be he, has done it. The Harry of the movies has been replaced by just your average everyday cop; we’re told that Harry’s boss, Lt. Drexler, can’t stand Harry for all his rule-breaking and bad-assery, but it’s very much a case of tell not show. Harry in fact is even polite not only to witnesses and potential suspects, but even to the latest partner he’s been saddled with. As Marty McKee notes, it seems evident that this ghostwriter had never actually seen a Dirty Harry movie.

The unfortunate thing is that City Of Blood is one of the sicker men’s adventure novels I’ve read, but then that seems to have been a common thread in all the Men Of Action books; take for example Ninja Master #6, which seemed to relish in describing the gruesome murders of children. This book features a “sex killer,” per the hypberbolic back cover copy, one who likes to decapitate his victims after engaging them in graphically-described sex scenes. This stuff is as lurid as the men’s adventure novels of the previous decade (it seems to me that the genre, for the most part, was a bit sanitized in the ‘80s, at least in regards to the perverted stuff, replacing regular old porn with gun-porn).

But if only we had a suitably deranged protagonist to navigate us through this sleaze! Instead, City Of Blood is like, I don’t know, Bronson: Blind Rage if it had starred Killinger. The novel is also poorly plotted, jamming two separate subplots in a wild disregard for narrative construction. Okay, we open with one of those sick-o sequences, where “Teddy” avidly screws a pair of high-class hookers in a sleazy San Francisco hotel, then hacks them up into hamburger. From this to Dirty Harry Callahan, called onto the scene. But instead of chasing down this killer, Harry is instead ordered to track down another serial killer: the Mission Street Knifer, who has murdered sundry bums and thus far eluded capture.

How tracking one serial killer will put Harry on the trail of another serial killer is something the ghostwriter hopes we won’t dwell upon too much. Anyway, Drexler sets Harry up with a new partner, much to Harry’s chagrin. This is Drake Owens, actor turned cop(!); he carries a “.356 Magnum.” (Well, the novel is fiction.) The ghostwriter doesn’t really articulate it, but Owens seems to get the gig due to his disguise abilities; much like the short-lived later men’s adventure series Decoy (not to be confused with the ‘70s Decoy), Owens can capably change his whole being through costuming and makeup and etc, and thus poses as a bum on loooong stakeouts in the hopes of baiting the Knifer.

In another parallel to Vengeance Is His, this ghostwriter seems to just want to turn out a generic, soapy novel about ritzy people doing ritzy things, and doesn’t want to bother with the blood and thunder expected of the genre. To wit, we have parts where Dirty Harry visits Drake and his wife at their home, accepting their offer of a homecooked dinner, and there’s even an overlong visit to the set of a movie, where Drake’s wife works as a seamstress or somesuch. However this does ultimately have something to do with the plot, as it’s her expertise which figures out the clothing on the hookers murdered in the opening section (unidentified due to their missing heads) came from expensive boutiques – a hunch that results in the humorous development of Harry visiting expensive clothing stores. However it must be stated that the author again fails to capture the dark comedy that would naturally ensue were such a scene to ever feature in one of the films.

The Mission Street Knifer subplot is not only ridiculous but poorly handled. After lots of padding with Drake as a bum and Harry on stakeout, it finally leads up to an endless part where, on Halloween night, Drake gets a hunch that this tall, mysterious figure dressed like the Grim Reaper (complete with a skull mask) might be the Knifer. And he just follows after him…and follows after him…and on and on. I forgot to mention, there are huge chunks of City Of Blood where Dirty Harry just disappears, and Drake Owens becomes the hero. But this guy is in fact the Knifer, and we do at least get a memorable climax, with the massive, robed figure seemingly impervious to bullets – even those fired by Harry’s infamous .44 Magnum.

Drake is nearly killed in the fight, and we thereafter have parts where Dirty Harry sits around and worries about him. I’ll just let that statement speak for itself; it pretty much says all there is to say about this novel’s handling of the character.

Now as for the main plot, “Teddy” continues to screw and kill with aplomb, including another sleazy bit where he goes to a club with his latest babe, and hacks her up while she’s having sex with some other dude. Now, in this particular ghostwriter’s usual penchant for sloppy editing, early in the book Harry and Drake are called onto the scene of some random shooting, an action bit that sees them taking out terrorists who are gunning for wealthy CEO William Maxim-Davis outside his corporate headquarters. This inrecibly lazy, coincidental plotting serves to bring Maxim-Davis into the plot, and Harry meets with him occasionally while tracking leads, and well…guess who Teddy turns out to be.

Action is only infrequent, always bloodless (save for Teddy’s gruesome kills), and usually arbitrary, like when researching leads Harry and Drake stay with the uncle of Drake’s wife, and an assassin tries to take them out in the middle of the night. Unbelievably, Drake actually survives the novel, though the poor uncle is blown away. This bit takes us into the climax, which is straight out of a cliffhanger serial; Harry confronts Maxim-Davis in his office, and with the push of a button on his desk the CEO opens up secret passageways into his office, and in come a couple dudes toting guns! Off Harry’s taken in the bastard’s limo, a henchman pointing a gun at his head, when those same terrorists from early on attack again. But even here in this climactic action scene the prose is bland and lifeless:

[The guns held by Davis’s henchmen] contained a clip of eight rounds each, which would mean that before Harry could get out his own weapon and do much of anything with it, he would very likely find his body riddled with sixteen rounds.

This prospect did not strike him as a very pleasing one, and, even as he cursed himself for blundering into Davis’s trap he tossed aside his .44, complying with the order Davis had just given him, almost casually, for he was still working on his contracts, signing his name over and over again as though he wanted to prove just how meaningless he had ever viewed the threat that Harry had posed.

Harry remained seated, saying nothing – what was there to say with two guns targeted at your head? – waiting for Davis to conclude his business and get to the point which, he supposed glumly, was his imminent execution.

Folks, don’t write your action novels like this. Especially don’t write a Dirty Harry novel like this.
Posted by Joe Kenney at 6:30 AM

Thanks for saving me from buyming that one! Is there a cover artist credit?

Yep, this is probably the worst Dirty Harry novel. I re-read it a while back (and it'll be in that massive-ass post if I ever get around to it... I think I hit 50 books a while back already so now the goal is... a hundred? :) ) and was really underwhelmed. I think I only picked it to re-read because I had an extra beat-up copy and was going someplace, and didn't want to risk messing up or losing one of my good ones. But, yeah, I remember the absurd slasher stuff and wondering what the hell the writer was thinking.

I hadn't noticed Dirty Harry books being that pricey... there's still a good many around under $10.

Thanks for the comments, guys!

Bob, I have no confirmation, but to me the covers on these look like the work of comics artist Bill Sienkiewicz. Around this time he was doing covers for Marvel Comics that looked very similar.

Zwolf, glad to hear I'm not alone...sometimes I wonder if I'm asking for too much from these books, but this one was just lame. It just seemed to have been written by a bored or distracted author with no knowledge or interest in the subject matter. I'm really looking forward to your post -- but a 50 book review? Could Blogger even handle a post that size?

Thanks, Joe. Interesting. I couldn't find any confirmation that's it's Sienkiewicz either. But it's a good guess.

i wonder if Clint got a cut of the proceeds?

Yeah, I may choke blogger, especially with that many cover scans. Might have to do it in a couple parts... So far I've only actually typed up one review, and it's so long I figured I'll have to post it by itself. It's of a William W. Johnstone "Ashes" book I hated so much I decided, "I'm getting as close to I can to digging up the bastard's corpse and kicking it around for several hours." If he was still alive I'd challenge him to a duel just for writing so badly. I know the real fault is mine for being too stubborn to quit reading the book, like I did the half-dozen other times I've attempted it since 1985, but god, it just never went ANYwhere. It was like 500 pages of being trapped in an elevator with a narcissistic drunk. He makes Rosenberger look competent. Anyway, I'm sure that one will be up long before the others... :)

I think I know why this book is terrible. It's from an alternate timeline where Ray Wise played Harry, as evidenced by the cover. That version of Dirty Harry was very different.

It’s usually a safe bet that the books with gratuitous film references are written by Meyers.