This paperback tie-in to the famous Pam Grier movie Coffy is notable for one thing – it takes an already sleazy story and makes it MORE SLEAZY. All I know about Paul Fairman is that he was a prolific writer who died in the late '70s, but he really hits the ball out of the park with this novelization, which is really all a grindhouse fan could ask for.

What Fairman does throughout is take already lurid material and just builds on it; there are no fade to black moments here, and if someone's merely shot in the movie you can be sure that in the book it will be elaborated with exploding brains and gore.  But most particularly what Fairman has done is just sleaze the story right the hell up.  My friends, Coffy the novel is damn sleazy.  How sleazy, you may ask? Just take a gander at the first-page preview, folks – I mean this the very first page of the book!! 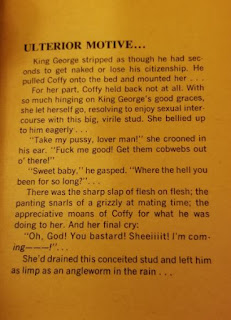 The book follows the same path as the film, so I’ll skip my usual overlong rundown. (I can hear your cries of relief even from here.) Fairman follows director/writer Jack Miller’s script most faithfully, only changing the most minor of details, but sleazing it up good and proper whenever the chance presents itself. Whereas the film would fade to black before the real kinky stuff, Fairman just keeps on going – hell, even in something as harmless as a catfight, ie when Coffy is fighting King George’s stable of whores, we’re informed that Coffy’s toe jabs up into a certain part of the female anatomy.

Fairman informs us that Coffy’s full name is Flower-Child Coffin, something I don’t think was made clear in the film. It’s been a few years since I’ve seen it so I might be wrong on that. And also that she’s comprised of so many various ethnicities that she comes off like a dark-skinned vision of bona fide lust; indeed, Coffy is “the kind of broad who could bring a man’s cock up with one look… Even decent guys got lustful where Coffy was concerned.” She’s got an Afro and she flaunts her stuff, but Coffy honestly comes off as a bit innocent in the novel – other that is than when she blows off a dude’s head within the first few pages of the book, forcing another guy to OD.

Coffy’s kid sister is now in a funnyfarm outside LA, her brains scrambled from the heroin she got hooked on. So Coffy lures the guilty pusher away with promises of sex, blows his head off with a shotgun, and then forces his companion to take a fatal overdose…and then she heads for work at the hospital! Coffy’s a nurse, same as in the film, though even here it’s not much elaborated on. What is elaborated upon is, as mentioned, the sleazy sex, so posthaste we’ve got Coffy bumpin’ and grindin’ with her politician boyfriend of sorts, Brunswick. But while Fairman might not leave the kinky details unexplored, he does drop the ball on important stuff – like the fact that Brunswick is black, something he doesn’t bother to inform us for quite a while.

On the side Coffy’s also giving the juicy goods to Carter, a black cop who refuses to give in to corruption, mostly after visiting Coffy’s sister in the asylum and vowing never to become part of the dirty machine that could produce such a wasted life. For this Carter’s beaten up by dudes with bats until he’s a vegetable, leading to one of those unforgettable lines: “Maybe he’ll be able to go to the bathroom on his own – someday.” Coffy’s with Carter when the two guys in masks attack him, and here Fairman elaborates in his own special way once again, with Omar, the more lecherous of the two hitmen, raping Coffy in graphic detail. This does at least get Coffy’s vengeance instincts all fired up; she vows to take apart the men who were behind Carter’s attack.

This puts her up against Carter’s corrupt partner McHenry (who of course is a white guy) and a local Mafia kingpin named Vitroni. But to get to the latter Coffy must first get through heroin dealer/pimp King George. In one of the book’s (and of course the movie’s) more memorable moments, Coffy goes undercover as it were as a high-class hooker from Jamaica named Mystique. Fairman as one might expect elaborates the sleazy world of King George’s harem, even including dialog between various whores about their johns.

To get the job though “Mystique” must first be “interviewed” by King George, leading to the sequence featured on the first-page preview; in the book itself it’s actually more graphic, and again a good indication of how Fairman indulged in his sleaziest impulses while writing the novel. But then the entire harem stuff is great, with Coffy instantly running afoul of the other hookers, leading to the memorable bit where she sews razor blades into her Afro and King George’s main woman grabs Coffy’s head in the catfight, slicing her hands up in the process. Even more so in the novel the reader can’t help but feel bad for King George, though; his fate – tied to a car and hauled along by Vitroni’s thugs – is much more grisly and gory here, with copious detail of his mutilated corpse.

Coffy herself doesn’t come off as hard-bitten as Pam Grier potrayed her. While the Coffy of the novel starts off strong, she’s prone to self-doubt and fearful at times, like when she’s captured in her failed attempt at killing mob boss Vitroni. Here we see Coffy pleading that she just “wants to go home” when Omar tosses her into a pool outhouse for safekeeping. But Fairman does his best to make the character more believable: when the novel storms for its awesome conclusion, Coffy realizes she’s able to change her personality like she changes her clothing – veering from a frightened woman to an emotionless killing machine in response to whatever situation she’s faced with.

There’s a line near the very end of the movie, which also appears in the book, where Coffy says over the past few days she’s been living in a nightmare, and that she’s still in the nightmare, and I recall reading something once where Quentin Tarantino raved about this line, how it was great writing – in fact he might’ve even been arguing that the line could be taken literally, that the events of the film really were a dream. Whether intentional or not, Fairman does capture the surreal texture of a dream in the finale, which faithfully follows the onscreen events – Coffy is taken off to her death, but through a series of events both accidental and planned, she’s able to not only escape but to turn the tables on her would-be killers. It’s a great sequence, complete with cars crashing on the freeway and a shotgun-armed Coffy taunting her former captors.

Fairman goes for more of a downer ending than the film – not that he changes anything. It follows the same course, Coffy extracting bloody vengeance at Vitroni’s house with that shotgun, then heading for a final confrontation with her old boyfriend at his beach cottage. But after dispensing justice Coffy tosses the gun aside and walks out along the beach, knowing that the cops are on the way and not caring – she just walks on and on, hoping to walk forever. What a bummer! The reader can be cheered up by the fact that Coffy did return, sort of; the following year’s Foxy Brown, again written and directed by Jack Hill and starring Grier, was conceived and written as a sequel to Coffy, only for the studio to request at the eleventh hour that it become its own thing, as sequels weren’t doing well at the time or something.

Proportionally, blaxplotaition must be the genre with more novelizations.

One of the coolest things about Fairman is that his office chair became a Warehouse 13 artifact:

You got a copy of this? Congratulations.This is hard to come by.

What I read from Fairman I liked. His Frankenstein novel was quite good. Nice to know that this isn't half bad.

Most of what I've read from Fairman ranges from competent to atrocious...but most of that was aimed at kids. Fairman unleashed.