The Ginger Star (The Book Of Skaith #1) 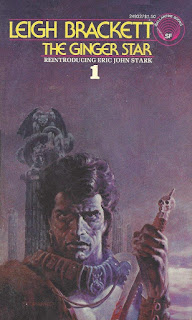 The Book Of Skaith, by Leigh Brackett
May, 1974  Ballantine Books

Two decades after her last published story featuring Eric John Stark, Leigh Brackett returned to the character with this paperback original sporting an awesome Steranko cover.* It would be the first in a trilogy dubbed The Book Of Skaith, and unlike those pulp tales of the ‘40s and ‘50s, here Stark would be flung into the far cosmos, Brackett’s “Old Solar System” with its ancient Martians and whatnot now thoroughly discredited by those buzzkilling scientists.

Yet I wonder why Brackett didn’t persist, as Skaith, the outpost-esque planet which orbits the titular “Ginger Star,” is basically a stand-in for Brackett’s Mars, with a little of her Venus thrown in. More pointedly, the year before Lin Carter had begun publishing his own “sequence” of novels inspired by Brackett’s pulp novellas, Mysteries Of Mars, so if he could get away with setting tales on a now-discredited “Old Mars,” then why couldn’t Brackett? My assumption is she must’ve felt the only way for her work to be taken seriously was to cater to the style of the time, thus it was goodbye to her decadent Mars and psychedelic Venus, and more’s the pity.

But other than that…all I can say is, I’m very glad I read Brackett’s early work before reading The Ginger Star. Because the author who wrote this is a pale reflection of the author who delivered such standout novellas as “Enchantress Of Venus,” “The Moon That Vanished,” and “Sea-Kings Of Mars.” Whereas those earlier stories burned with a special kind of fire, filled with inventive ideas, fully-fleshed characters, and memorable dialog, this one is a tired, turgid trawl that endlessly repeats the same sequence of events. And shockingly enough, the characters here are practically ciphers; there was more character depth in Brackett’s pulps, all of which were half the size of this novel.

Without any exaggeration, here’s the plot of The Ginger Star: Eric John Stark will go somewhere on Skaith, meet a few cipher-like characters, exchange some exposition with them, then they’ll all get ambushed and someone will knock Stark out and abduct him. Stark will be taken along by this new group of cipher-thin characters, trading exposition with them, and then another group will spring from the woodwork, ambush them, and take Stark captive. This goes on for the entire novel. There’s even a part a hundred pages in where Stark vows to never be abducted again…which is a laugh, because he’s captured yet again not too long after!!

I’m not sure how this could’ve happened to a writer of Brackett’s caliber. And certainly she returned to Stark because it was her main character – her Tarzan or Conan – so she must’ve felt some drive to go back to him after so long. In fact I’m sure she wrote the unpublished-for-decades “Stark And The Star Kings” shortly before this one, so it would appear she was planning to return to Stark for a while. And yet even that novella, cowritten with her husband, was subpar, especially when compared to her ‘40s and ’50s material, so had she just lost her mojo?

Regardless, I can’t really recommend this novel, as I found it a trying, tiring read, with little of the spark Brackett once so easily displayed. But for posterity, it goes like this – Eric John Stark when we meet up with him is headed for the distant world of Skaith, newly introduced to the galactic union, something which I believe wasn’t mentioned in those early novellas. But then, not much of those stories are mentioned at all, other than a bit more fleshing out of Stark’s background, in particular how he was raised by a sort of space bureaucrat named Simon Ashton, a character often mentioned but who only appeared in the first Stark novella, “Queen Of The Martian Catacombs.”

Ashton is central to this because he was last seen on Skaith, trying to bring the desolate, decadent, and dying world into the union, and after a couple months boning up on the planet’s culture and languages, Stark is on an interstellar voyage to find him. Not much detail on the space trip, by the way, but it doesn’t appear to last very long – another difference from those earlier yarns, where hyperspace travel didn’t appear to exist. Bracett is more concerned with the Robert E. Howard-esque setting of Skaith, which is fine by me – I’ve never much been into “hard” sci-fi that goes to elaborate lengths of explaining how things work.

When Stark arrives on Skaith it bodes well for the novel ahead; it seems like vintage Brackett, with this dessicated, ancient world and its mysterious people and Stark the mysterious newcomer everyone’s after. There’s a vintage pulp vibe when he takes on these sea creature things, almost holy monsters that the natives of course avoid due to superstition. Stark takes care of one of them with his blade. But sadly that’s about it so far as Stark’s bad-assery goes; he’s been whittled down a bit, same as he was in those mid-‘60s rewrites The Secret Of Sinharat and People Of The Talisman. Because from here on out it’s the endless cycle of Stark meeting some new people, traveling a bit, getting knocked out and captured, traveling some more, then getting knocked out and captured again.

There are interesting touches at the outset, though. Brackett initially seems to be doing a parable of the late ‘60s/early ‘70s, with an indolent group of hippies called the Farers who range around Skaith and get high off illegal plants. They’re like the children or something of the never-seen Lord High Protectors, who control the planet from their hidden fortress, the Citadel; a sadistic lot called the Wandsmen are in charge of law and order, apparently serving the whims of the Protectors. Stark runs into the Wandsmen posthaste, as well as their loyal Farers: in particular there’s a fully-nude, bodypainted Farer named Bayas who has an instant lust-hate thing for Stark, trying her damnest to get him killed. But ultimately she’s one of the main characters who is introduced, given lots of narrative space, and then abruptly dropped from the text.

I almost forgot – there’s a prophecy, of course. Some native witchwoman named Gerrith has prophecized that a “dark man” from space will come and lead the people of Irnan to freedom, and he’ll destroy the Citadel, mystical home of the Protectors…it does go on. And apparenty every single person on Skaith has heard of this recent prophecy, so now everyone wants Stark, who is of course clearly this figure from the prophecy. First Stark hooks up with Yarrod, a guru who commands a “pod,” basically real hippies as opposed to the plastic fantastic Farers in that they’re more into hivemind mentality and Oneness and such and not just laying around and getting high.

But this is just another of the many unexplored elements Brackett doles out; we get an offhand statement that these pods only live a few years, implying that the members all die, but instead we get in-fighting between resident tough guy Halk and Stark. Yarrod meanwhile has of course heard of the prophecy and saves Stark from some attacking Wandsmen and Farers; he and his people are from Irnan and have come here to try to find out how to escape the planet. They eventually meet up with prophecy-spouter Gerrith, however it’s the daughter of the woman who made the actual prophecy(!); the original Gerrith has been killed by the Wandsmen due to her “false” Dark Man prophecy.

Anyway this Gerrith is a smokin’ hot blonde and she ends up being Stark’s sole bedmate in the tale…not that Brackett really gets into too much. Gerrith tags along with Stark as he makes his seemingly-neverending journey across Skaith, as does Halk and a few others who don’t do much to make themselves memorable for the reader. And Brackett’s similar names don’t help much – we’ve got Gerrith, Gelnar, and Gerd, all in the same book (one of them’s a dog, by the way). She also rarely describes anything – gone, friends, is the evocative word-painting that was so central to Brackett’s pulp masterpieces. Gone! Action scenes, when they happen, also lack the blood and thunder of vintage Brackett, though Stark does make a few kills in the book.

Stark and company make their laborious way across Skaith, moving from the coastal area into a forest area and finally into a frozen area. The Lords live remote from the people, so remotely that they are considered supernatural beings by the rank and file. Their Citadel is guarded by the large mutant telepath Northhounds, canine beasts that apparently will be featured more in the second volume. Brackett ties in Stark’s oft-mentioned but seldom-displayed “wildman” history in that, thanks to his own “animal” cunning, he’s able to break through the telepathic hold of the Hounds and challenge their leader, thus becoming the alpha of the group. He uses the beasts to run roughshod over the Lords, who of course turn out to be spindly, weak old men.

Folks it was a plumb beating getting through this book. I’m sorry to say it. I love Leigh Brackett, you all should know that. I’m new to her work but by damn I rank her as one of my favorite writers of all time, ever. But The Ginger Star makes it clear that there was a huge difference between 1950s Brackett and 1970s Brackett. The author of this book comes off like someone desperately trying to mimic that earlier, superior author’s style, and failing miserably. Here’s hoping that the next two books are better.

*Steranko’s cover painting is actually of a barbarian character of his own creation, but the story goes that when Leigh Brackett saw his artwork – probably on the cover of Comixscene #5 (July – August, 1973) – she declared it the greatest representation of Eric John Stark ever, and was able to use it for The Ginger Star. Steranko went on to do the covers for the next two volumes, but as you’ll note Stark looks a bit different on them. Also it’s worth noting that on none of the three covers does Stark have the “sun-blackened skin” Brackett always made a point of mentioning.
Posted by Joe Kenney at 6:30 AM