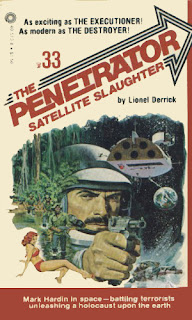 Despite the author’s note which proclaims that this installment of The Penetrator is based on fact, it’s clear that Mark Roberts either read about or saw the James Bond film Moonraker, which came out the same year – though given time between writing and publishing I’m wondering if it wasn’t just a coincidence after all. Regardless, this volume is very similar to the Roger Moore Bond film of that year – Mark “The Penetrator” Hardin goes into space, folks. I don’t think the Death Merchant even made it there!

As expected, there’s no pickup from the previous volume. (And another thing missing is the much-vaunted “Combat Catalog,” which appears to have already been scuttled just a few volumes after debuting.) When we reconnect with Mr. Hardin he’s sitting, bizarrely enough, in the press pen, listening to a commercial airline pilot talk about a recent UFO sighting(!). The pilot goes on to joke that perhaps this UFO is connected to the “freak weather” that’s been hammering the country, and this off-hand chance comment is the real reason why Mark is here in San Francisco.

The Penetrator is certain this freak, nonseasonal weather is the result of some chicanery on the part of some evildoers somewhere, and posthaste his wild hunch is justified – when he pays the airline pilot a visit, posing as a researcher, he finds the man murdered in his home. The killers are a pair of “Third World” types, and they’re still in the house when Mark arrives. Cue one of the novel’s few action scenes, as Mark makes quick work of one of them, but the other escapes. These hitmen are members of TWIS, a multi-ethnic spy ring made up of Communist Third World nationalities, and of course this group proves to be the main villain this time around. In other words, non-white Commies, the worst of the worst in the world of men’s adventure fiction.

Mark shuttles back and forth to DC quite a bit this time. He’s back in contact with Fed Dan Griggs, who basically hires the Penetrator to handle this threat, free to work outside the usual agency restraints. Griggs is also certain the Third World bastards have something to do with the weather, and he’s been working with some NASA folks who agree. Because it’s expected of the genre, Griggs hooks Mark up with a sexy female babe of a partner: Samantha Chase, a “rusty-haired” NASA security officer who ultimately proves to be useless to the plot, other than the expected hookup late in the game (which occurs entirely off-page!). Otherwise she just exposits on space research.

And folks, Satellite Terror is friggin’ mired in space research. Similar to the earlier installment Computer Kill in which Chet Cunningham wasted our time with endless programming code, Roberts here goes on and on about space travel and surviving in space and the like, even down to mathematical equations and calculations. This proves to take up the majority of the novel. Before that we have incredibly brief action flourishes, like Mark’s visit to a Third World agency in DC, which of course is the front for a hidden area in which leftist brochures and banners are printed for distribution to the revolutionary masses. Later Mark goes back and blows the place up. Take that, George Soros!

Early on there’s a bizarre “action scene” that’s unlike any other in the series. When tracking down leads on how these hardscrabble Third World people could even get funding for something as expensive as a space station, Mark discovers that wealthy westerners are secretly funding them. One of them is a left-wing banker, and Mark breaks into his home to grill him. Well, the guy’s entire family is there, two boys and a little girl, and Mark ends up shooting all of them with Ava, his dart gun – pretty strange indeed to see “The Penetrator” shooting an unarmed little girl with a sleeping dart. He even darts the dog! The boys put up a valiant fight to protect their dad, and Mark handcuffs them. At least he doesn’t kill their dad.

There’s also an ultimately arbitrary bit where Mark and Sam Chase go to Mozambique, again following leads. This part is developed to the point where you expect a good chunk of the book will occur here in Africa, but all told Mark is there and back within a few pages. What makes this part more interesting is it comes off like a prototype of Roberts’s later work on Soldier For Hire. Mark, under a fake name, has hired two mercenaries – each of whom are given inordinate, page-filling backgrounds – and hopes to filter out the secret TWIS base deep in the jungle. He’s begrundgingly brought along Sam. This part is kind of a waste, but it does show the merciless side of the Penetrator we don’t see very often anymore, when Mark kills two unarmed captives.

But from there it’s to deep in Texas where Mark is embroiled in some heavy-duty space training. Confirmation’s been gained that the Third World terrorists do in fact have a space station, and from there they are messing with the weather in the hopes of decimating the west. But that damn red tape still prevents any official action be taken, so it’s up to “Space Cadet Hardin” to go into space and wipe them out! Roberts tries to spice things up with the occasional action scene, like a would-be saboteur, but it comes off as bland, and the incessant exposition about space stuff doesn’t help. Roberts has done his research and by god, he wants you to know about it.

It's all cutting edge for the era, though; the space shuttle is so new it’s mostly referred to as the “Orbitter.” Mark is also trained in the newly-developed unit which will allow him to fly around on his own in space. Also here is where Mark and Sam become better acquainted; as part of a convoluted undercover scheme, Sam is posing as his wife, and Mark doesn’t waste time consumating the marriage. But as mentioned, for some inexplicable reason Roberts keeps it off page. I still feel some editorial mandate was behind the lack of sex and violence which befell The Penetrator in these later years, but hell, maybe Roberts and Cunningham just mellowed out.

Finally on page 134 Mark launches into space on the Enterprise shuttle; surprisingly, Sam doesn’t go with him. He exits on his own once they’re in orbit and pilots himself out into the depths of space, fixing his bearings on where they’ve determined the secret Third World space station to be. Roberts does not even attempt to capture the beauty of the heavens; no part where Mark looks off into the cosmos and ponders man’s inhummanity to man or other such bullshit. Nope, he just works his way through space via some calculations and figures, and that’s it. Even more incredible, Mark’s attack on the space station – that event the entire novel has been building toward – is as anticlimactic as you can get.

It’s over and done with in just a few pages as Mark uses a specially-designed “Gladiator sword” to break into the station, where he hacks up a few unarmed technicians. The villain is delivered a Moonraker sendoff, exploding as he attempts to escape. We get more space calculations and equations as Mark decides to orchestrate his own weather chicanery on the Third World itself before setting the place to blow. And honestly folks, that’s it – a quick wrapup with Mark and Sam spending some time in a Florida beachhouse.
Posted by Joe Kenney at 6:30 AM

Space Force! It's always a bad idea to send series characters into space, but for some reason, even Jason Vorhees ends up there. I get that space travel is interesting, but... there just ain't that many people to kill up there, so it's always anticlimactic. Plus in space everybody's so fragile it's never that much of a struggle. Ya don't need to blow their head off with a Magnum... just rip a tiny tear in their space suit and they'll be finito. It's kinda like watching soap bubbles fight. And yet if an action series goes on long enough, it's gonna go into space. I'm not sure if Mac Bolan did - I'd be more surprised if he didn't - but it only took Machete three movies to end up there (provided the last one ever actually gets made).

The cover painting for SATELLITE SLAUGHTER is one of the many cool covers artist George Wilson did for THE PENETRATOR series, mostly using the great male model Steve Holland as the model for The Penetrator character.

> It's all cutting edge for the era, though; the space shuttle is so new it’s mostly referred to as the “Orbitter.” Mark is also trained in the newly-developed unit which will allow him to fly around on his own in space.

I assume this unit is the Manned Maneuvering Unit,or MMU for short.

> Finally on page 134 Mark launches into space on the Enterprise shuttle...... He exits on his own once they’re in orbit and pilots himself out into the depths of space

I will go ahead and assume that the launch doesn’t take up more than two pages or so. How do we know it’s Enterprise! Ground communications?

> And honestly folks, that’s it – a quick wrapup with Mark and Sam spending some time in a Florida beachhouse.

So they just skip over the landing?