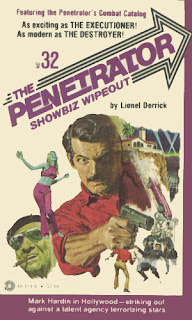 After a couple misfires The Penetrator sort of gets back on track, though make no mistake this is a greatly watered-down take on the character, particularly when compared to the merciless incarnation of the earliest volumes. It was Chet Cunningham who gave us that merciless Penetrator (wow that just sounds terrible, doesn’t it), which makes it all the more humorous that in this one Cunningham has Mark “The Penetrator” Hardin practically walking on eggshells to only kill those who truly deserve it.

But at least this one rises a bit out of the torpor which seems to have settled over the series. That being said, Showbiz Wipeout is more akin to a private eye yarn, as Mark suddenly becomes all fired up about a potential creative agency monopoly in Hollywood – clearly the authors used this series to write about whatever their current fancy happened to be. Why this would be of any concern to the Penetrator is something the reader is encouraged not to think about. Even more goofily, Mark is appraised of the situation via the “bulletin board” in his Stronghold, ie the converted mine which serves as Penetrator HQ.

What really has Mark interested is all the random deaths and injuries going on in Hollywood; the book opens on an extended sequence of various notables either being killed, beaten, or swindled by thugs who work for Global Talent Agency. The goal of course is all the Hollywood bigshots under one roof, and the mysterious head of GTA will stop at nothing to achieve his goal. Humorously the LAPD doesn’t even appear to exist, and these murders – including even a staged car crash, as depicted on the cover – are carried out with little concern about running afoul of the law.

Cunningham fully commits himself to his own goofiness; not only is the Penetrator suddenly interested in this Hollywood nonsense, but he also just happens to have an old college buddy who now runs a talent agency! This is Joey Larson, Mark’s old frat buddy. Mark calls him up, drives over to Los Angeles, and discovers that Joey is stressed out because he too is being hassled by GTA. They want ownership of Joey’s one star client, who just happens to have been the victim of the car crash mentioned above. GTA is also threatening Joey’s life, so Mark puts him up in a motel and insists that he hide there.

Mark poses as “Lance Lansing,” up and coming actor with regional theater exeperience, his headshot and resume prepared by Professor Haskins back at the Stronghold. He gets an interview at GTA, coming off like an ass to the head agent there, a nebbish chump with a “honkey afro.” Mark sneers at the lowball offer he’s given, puts down the agent, and then beats the shit out of the two thugs the agent calls in. Mark also ingratiates himself into the orbit of Lorna Luna, a onetime box-office draw but now “old” at 45. She takes a shine to hunky “Lance” at the party she holds in her mansion, though Cunningham doesn’t have Mark exploit it – and also we get a few random mentions that Mark is only 27 or so, which doesn’t seem right to me. The series has appeared to occur in a sort of real time, ie the first volume was in ’73, seven years before this one, and periodically we’re reminded of the passage of time in various installments…so are we to believe Mark Hardin was only 20 years old in that first one?

Anyway, while Mark passes on Lorna Luna, he does become involved with plucky private eye Angelina Perez, aka “Angie,” a hotstuff Latina who carries a piece in her purse and who was herself hired to look into GTA. Mark becomes so smitten with Angie, in fact, that he occasionally wonders if he should let her know he’s the Penetrator and make her his partner! The veteran Penetrator reader can’t help but wonder why Mark never felt this way about his casual girlfriend, Joana Tabler, who is basically the same as Angie, she too being a gun-toting agent of sorts. Now that I think of it, Joana hasn’t been seen much in recent installments, so maybe Cunningham is paving the way for a new casual girlfriend for our hero. Hell, Mark even ends up not having sex with her, so as not to ruin any potential for an actual romance in the future or something.

Action is infrequent, again keeping with the pseudo private eye vibe of the novel; Mark’s kills are only few, and his first victim is the GTA thug who murdered the girl in the car wreck at the start of the book. Otherwise Mark mostly makes use of dart gun Ava, which per the norm these days is only loaded with knockout doses. The first big action scene comes at an intended trap; the mysterious leader of GTA has figured out that the Penetrator is on the scene, thanks to those handy blue flint arrowheads he always leaves behind, and sets up a “jiggle girl” event which is really just a ruse to lure out the Penetrator. A “jiggle girl” is a new busty actress the studios show off for reporters; the event, which Mark himself realizes is a trap, takes place on the Universal Studios lot and features actors dressed up like Keystone Cops (as shown on the cover – again, the cover is faithful to actual events in the novel).

Again Mark mostly does his fighting with Ava or a .45 automatic. The Keystone Cops turn out to be more GTA thugs, and one of them almost gets the better of the Penetrator, pinning him down during a long chase through some empty studio lots. Here Angie comes to the rescue, blasting away with that gun in her purse, and again there is the blatant disregard for reality as one would normally expect in a Chet Cunningham novel. After the firefight, our heroes basically just drive off and grab a bite to eat. Angie has been digging around off-page, trying to determine the paper trail that will lead to who ultimately owns GTA: we readers learn it is a producer named Jeffrey Scott Duncan who was blacklisted years before, and now aims to get the ultimate revenge on Hollywood by taking control of all the major stars.

The climax takes place at a costume ball in an old villa that’s recently been used for a horror film. Duncan has rigged the place with various booby traps, again expecting the Penetrator will show. He does, dressed as Zorro; Angie goes as a “harem girl.” But by this point Duncan doesn’t have any goons left, so rather than the typical action denoument, we instead have this “tense” bit that goes on and on where Duncan, suddenly acting crazy, reveals that he has a bomb on the premises and intends to blow everyone up as his final act of revenge. Or something. Actually the part with the bomb reveal is kind of funny in a dumb way because Duncan straight-up tells everyone it’s a bomb and they’re going to die, but everyone thinks it’s part of an elaborate act, given that the entire grounds is done up with robotic actors and taped recordings of arguments, sex scenes, and other gimmicks.

The Penetrator again fails to actually kill anyone; Duncan’s fate is so ridiculous I had to read it twice to ensure I hadn’t missed something. (Spoiler alert – the dude’s eaten off-page by a tiger!!) Cunningham winds up the tale with Mark again puzzling over his growing feelings for Angie, wondering if he’ll ever give up the Penetrating life some day and get hitched – or maybe even bring on a partner. But he tells Angie so long and heads off for his next mission, which hopefully will be a bit more fun than this one. I mean, Showbiz Wipeout isn’t terrible – it’s probably the best we can expect from the series at this point – but it replaces the gory violence of the early volumes with a sort of goofy surrealism. Personally I miss the gory violence.
Posted by Joe Kenney at 6:30 AM

So the Mark character doesn't "allow" himself to be seduced by the "jiggle girl"? Before rescuing himself, I mean?
I know I'm mentioning it for what seems like the hundredth time, but thanks to the early Destroyer books - especially # 5, which to me has nearly the ultimate example - I think a "Men's Adventure" book should have BOTH things happen, period.