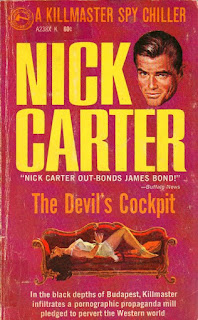 First though a bit of that random bizarro Stokery we expect from our lovably prolific author – we get a lot of backstory that Nick has just returned from a grueling, hellish training mission in Vietnam, where he was slipped behind the border and basically presented as a live target for the VC. Now he’s back, though still suffering from “jungle rot,” and he’s brought with him Pok, a 16 year old Korean orphan whom Nick now considers himself the “foster father” of. Pok will live with Nick in his New York penthouse, going to school during the day and serving as Nick’s “houseboy” in the evening. Not to mention serving up some pre-PC ethnic humor via his pidgin English: “Everything number one. I go to school half day for first week, get olientated.”

Nick watches one of the movies, which features Mona and some other dude as criminals drafted by the CIA who go around murdering wantonly and screwing wantonly. Nick is again disgusted. Then he sees the dirty comic books! This plus the “shriveled testicles” of the murdered CIA agent are the icing on the cake – Nick practically begs to be sent off on the mission. But as usual with Stokes Nick has absolutely nothing to go on: the threat is vague, the leads even vaguer. The CIA man was killed in London, where he was investigating a “procurer” of women named Paulus Warner who is from Germany. The CIA believes that these porn movies are being filmed near Budapest, unbeknownst to the Hungarians, and are in fact being funded by the Red Chinese – as Nick states, the Russians don’t go for the hanky-panky stuff, so it would be too much to figure they were behind these dirty movies in their own veritable backyard.

Before heading for London Nick stops back in his penthouse for more un-PC banter with Pok, who informs Nick that a “Florence” has been calling for Nick and indeed is waiting for him in the study. Florence we learn has long set her sights on Nick, who doesn’t much like it when the woman shows the initiative. So to get rid of her he engages her in a yoga-fueled sex marathon, wearing her out good and proper. Stokes isn’t as explicit here as normal, but the fact that he has this sex scene so shortly after the porn movie material – which we’ll recall upset Nick so much – surely must be a bit of intentional humor on his part.

We move now to Swinging Soho, but Stokes doesn’t much bring to life this long-gone era, though Nick does get in a brief tussle with a gang of mods. More time is spent with waiflike Pam, a newbie hooker with a heart of gold; Paulus Werner’s angle is that he finds hookers and showgirls, offers them a gig in movies or whatever, and then takes them back to Budapest, where they star in these porn flicks whether they like it or not. And once the producers are done with them, they’re shipped off to Vietnam and China to sexually serve the troops! I say, Manning Lee Stokes has taken the Yellow Menace into new heights of sadism, though curiously there isn’t a single Chinese character in the novel.

Anyway Nick is approached on the street by Pam and takes her back to his place, thinking on the fly – he might be able to draft her into the rooting out and capturing of Paulus Werner. Humorously, Stokes basically builds up Pam as he goes; when we first meet her, she’s barely attractive, lurking in shadows and quick to jump like some beaten puppy, but she becomes more and more outspoken – not to mention hotter – the more Nick talks to her. By the end of the Soho sojourn Nick and she are engaging in the expected sexual hijinks, though again Stokes doesn’t get as explicit as he does in other volumes. Stokes’s version of Nick is as ever one cold bastard, though; Pam falls in love with Nick, begging to go back to the US and live with him, and Nick tells her he’s starting to feel the same for her – then at novel’s end he just leaves her without a word, figuring the assignment’s over and that’s that, and then goes back to his penthouse for more all-night shenanigans with Florence!

Nick’s first kill occurs here; again proving the brutal version of the Killmaster Stokes gives us, Nick questions heavyset Paulus Werner, toying with him that he’ll send him to America if he answers his questions, but planning of course to kill him. And Paulus too realizes this moments before it happens. But as Jure so wonderfully put it, Paulus is “A fat fucking German pimp whom we don’t feel sorry about!”  (And by the way, Jure, when are you going to start posting reviews again?) Paulus has put together a “troupe” of whores and dancers to take to Budapest for the porn films, and Nick’s plan is to pose as Paulus’s nephew, looking to take over the business.

Pam poses as Nick’s wife in one of Stokes’s usually-digressive and ultimately arbitrary setups, because this goes absolutely nowhere; they slip into Budapest where Pam is arrested as part of the plan. Nick heads into the hinterlands of Hungary where he comes to the castle-like villa of Michael Blackstone, exiled American director who was blacklisted in the ‘50s and decided to become a Commie for the hell of it. Supposedly he’s making the porn movies, as his stamp is evident in their style, yet this is another ball Stokes drops as it turns out in the homestretch that a Hungarian director, Bela Kojak, is running the show – and he has a bit of a Fleming flair to him in that he dresses like a “1920s director.”

But hopes for a good hero-villain confrontation are squandered, which is par for the course in Stokes. Even though pages were devoted to Kojak literally crushing Nick’s resolve – by placing hundreds of pounds of millstones on his chest – when Nick gets free, running around with some “tommy guns” (despite his broken arm), he doesn’t shoot a single person with them and all he does is fire off a few shots at Kojak’s car as the villain tries to flee the burning villa. Later Hawk will inform Nick that Bela died – eventually – in a hospital. Meanwhile Blackstone and Mona Manning, who finally appear in the text, are given almost cursory sendoffs; they decide to leave Hungary with Nick, even though a return to America will result in prison…and then Blackstone takes matters into his own hands.

That Mona only has a few lines of dialog is typical of Stokes’s usual sloppy plotting, or at least how he will busily set up plots at the outset of the novel, then pad with abandon, and then quickly wrap everything up in the (anti)climax. But damn it all I really like his books regardless. Perhaps it’s because his Nick Carter is so brutal and mean, with none of the niceties other ghostwriters give him. There is also that ultra-macho vibe to Stokes’s work in general which is a bit refreshing or at least unusual in today’s emasculated and chickified era. Yet at the same time, Nick’s sort of a dick and he murders in cold blood, so there’s that.

The Devil’s Cockpit overall is pretty entertaining, and moves more quickly than the usual Stokes installment, likely because it appears to be shorter. But it’s unfortunate that so many subplots are just ignored – there was all kinds of opportunity with fallen movie star Mona Manning, and the entire Chicom propaganda porn threat was so bizarre it really needed more exploitation. One would think Stokes would learn from this, but he pulled the exact same stuff in The Red Rays.  Also, the title has nothing to do with anything and I’m betting it was something Award Books came up with.
Posted by Joe Kenney at 6:30 AM

I know a couple of Soviet books that saw pornography as a symptom of the imminent fall of the United States. The Nomenklatura did not know how to have fun.