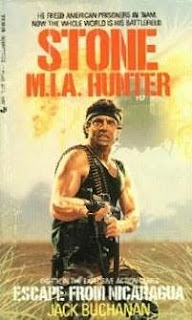 The MIA Hunter series undergoes a bit of a change with this eigth volume (actually ninth when you count the unnumbered installment Stone: MIA Hunter); now MIA Hunter Mark Stone will venture around the globe at the behest of the US government to free prisoners of the Cold War, not just into Southeast Asia to free ‘Nam-era POWs. But while the setup might be slightly changed, the series template is firmly intact.

A couple years ago Stephen Mertz sent me a list of the writers who worked on MIA Hunter. Basically, Mertz edited the series and wrote each volume, with a lineup of co-writers occasionally helping out. For this volume his co-writer was Arthur Moore. I’m not familiar with Moore, but per Mertz he also co-wrote MIA Hunter volumes 9 and 11. As ever though this series really does seem to be the work of the same writer, ie “Jack Buchanan,” so doubtless this is Mertz’s behind-the-scenes hand. But I’m pretty sure I can detect what Arthur Moore has written.

For the first time in the series, I think, Stone is usually referred to as “Mark” in the narrative, save for occasional scenes where he abruptly is referred to as “Stone.” Given that these latter parts are often arbitrary action scenes, my assumption is that this is Mertz filling in Moore’s manuscript. (Escape From Nicaragua comes in at an unwieldy 198 pages of small print.) Not that there’s anything wrong with action scenes, but in many instances they clearly seem to be filling up a void – like, “Mark” will scope out a truck he needs to acquire to get to his destination, and then a page or two later “Stone” will be blowing away scads of Sandanistan soldiers before proceeding on his way. In other words, the “Stone” stuff could be cut out of the narrative and one would never know the difference.

Anyway, the changed setup. For once, unbelievably, we get a bit of continuity – events clearly refer to Stone: MIA Hunter and the fiance Stone was reunited with therein; we’re informed that Stone is giving Rosalyn “time” to get over her decades-long captivity in ‘Nam. Translation: We’ll never see nor hear from the broad again. Otherwise, Stone and his colleagues Hog Wiley and Terrence Loughlin have now been hired by the government, working out of Fort Bragg, their objective to find and retrieve various prisoners. Stone’s girlfriend April is also on the scene, but will stay in Fort Bragg and handle all the paperwork, what with her being a girl and all. Oh, and given that it’s related up front that Stone has a girlfriend, this means that, as usual, there won’t be any funny business on the mission. This, the team’s first mission, has them going to Nicaragua to rescue a pair of CIA agents who have been captured by the Sandanistas.

It's humorous because for the most part Escape From Nicaragua plays out identically to the preceding volumes; only the locale has been changed. Stone and team venture into South America, meet a few native freefighters, get in countless skirmishes, finally find the prisoners (on the very last pages), free them, and escape. It’s practically the eighth variation of the story that was first told in MIA Hunter #1. This time the difference is that the natives speak Spanish, and the villains are Russian-backed Sandanistas instead of Russian-backed NVA.

Other than Stone becoming “Mark,” subtle changes include Hog Wiley speaking more like an “East Texan” than previously, and also there’s a bit more of an attempt to give cipher Terrence Loughlin some personality, mostly through his endless bantering with Hog. Some of this dialog is funny, and there are recurring jokes throughout, like Hog designating helpful natives as “Honorary Texans.” Stone is presented more as the straight man, always caught in the middle of the bickering and bringing the two back to the matter at hand. But other than the bit early on about Rosalyn, his old fiance, there really isn’t much personality for Stone this time; “Mark” just goes about his job to rescue the CIA agents, and it’s not like this time he’s even driven by the same personal demons that had him rescuing MIA soldiers in ‘Nam.

From Honduras the trio slip into Nicaragua, and the festivities begin posthaste. No joke, it seems llike every other page these guys are getting chased and shot at. If they aren’t getting chased by guys in trucks, they’re hiding from ‘copters that patrol from the skies. If anything I began to respect the apparently-vast army resources of the Sandanistas. I mean they have their country guarded down to the last blade of grass. But the action is constant and at the usual level of the series, which is to say lacking the brain-spurting, gut-busting gore I prefer in this genre; people just get shot and fall down. But make no mistake, a lot of people get shot, and sometimes knived…there’s a grim scene showing the coldblooded nature of our heroes as Stone slits the throats of a few dozing guards at a Sandanistan air base.

The team goes through a sequence of local guides, which also robs the narrative of what little emotional impact there could’ve been; some new guy is introduced, makes an impression, then takes the team to some backwoods Nicaraguan village, introduces the next guide, and says so long. One of them turns out to be a turncoat, setting our heroes up in yet another action scene, and one of them’s a hotstuff Latina babe who isn’t exploited at all, in complete disregard of what I feel should be written-in-stone rules of the men’s adventure genre. I mean her breasts aren’t even mentioned! But our heroes do trade lines about how pretty she is, at least – and she’s even more cold-blooded than they, at one point casually blowing away a pair of cops.

Action is as mentioned frequent and at times exhausting – and also as mentioned sometimes arbitrary. There’s a bit midway through where “Mark” decides the team needs an armored truck, then “Stone” and comrades get in a positvely endless firefight to attain it. Then just a scant few pages later they deem the truck is more trouble than it’s worth and burn it!! So much time is consumed with this sort of thing – not to mention a lot of sequences from the point of view of the various Sandanista soldiers – that the actual rescue of the CIA agents comes off as anticlimactic and rushed, occurring over just a few pages at the very end.

All told I have to rate Escape From Nicaragua as my least favorite MIA Hunter. Hopefully Moore’s next contributions will be better, and I’m really looking forward to the ones by Bill Crider.

Oh and Stone’s gotten a makeover on the cover…dude doesn’t look like a psycho at all.
Posted by Joe Kenney at 6:30 AM

I misread the title as "Stoned MIA Hunter" and the cover pic didn't help...

Now that would be a series...just aimless stoned wanderings through the jungles of 'Nam.