The Nemesis From Terra (aka Shadow Over Mars) 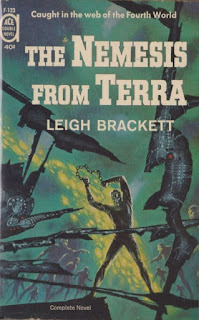 The Nemesis From Terra, by Leigh Brackett
No month stated, 1961  Ace Books

The copyright page of this Ace Double doesn’t mention it, but The Nemesis From Terra is actually a reprint of a novel by Leigh Brackett originally titled Shadow Over Mars, which first appeared in the Fall, 1944 issue of Startling Stories and was later reprinted in the March, 1953 issue of Fantastic Story.  This was Leigh Brackett’s first novel, and any worries that it might not be up to par with her later work are quickly dashed. Also, unlike
The Secret Of Sinharat or People Of The Talisman, this one has not been expanded or otherwise changed in this Ace reprint, other that is than a few editorial snafus.

Brackett, despite her recent intro to the world of fiction, is as evocative as ever, her fast-moving pulp tale both masculine and poetic. I mean this one covers everything from dewey-eyed love at first sight to a fistfight in which a dude’s thumb is ripped off…and then later he’s bashed in the face by the severed “trunk” of a corpse! It’s also interesting that Shadow Over Mars (as I prefer to call it – doubtless Ace changed the title because they didn’t want to scare away dweebs who’d get upset over the fact that there’s no life on Mars) has elements which would be expanded upon in later Brackett work.

I get the impression that this one is set later in Brackett’s future chronology than the other tales I’ve read; perhaps around the era of the latter stories in the anthology The Coming Of The Terrans. Terran “exploitation” of Mars is more rampant than in the other Brackett stories I’ve read – and just so you know there’s no fooling, the organization actually calls itself the Terran Exploitation Company. There’s also use of the Banning shocker weapon, which featured in the late-chronology (but also early-written) Brackett yarn “Child Of The Sun.” It appears that Brackett’s early stories, coincidentally or not given that WWII was raging when she wrote them, were more concerned with a despotic galactic government than her later material.

Anyway I’m guessing that Shadow Over Mars takes place at least a few decades after, say, “Enchantress Of Venus,” and perhaps around the same time as the beginning and ending sections of The Sword Of Rhiannon. And speaking of which, there are similarities between that tale (aka Sea-Kings Of Mars) and this one; both feature ruggedly virile but hardbitten bastards of protagonists who are, despite their nefarious nature and crime-laden backgrounds, thrust into prophetic positions as saviors of Mars.

Such is the case with this novel’s hero, Rick Gunn Urquhart, and I have to say, I do love it that the savior of Mars is named “Rick.” He’s a cynical, tough-talking, Bogart-esque brawler who, we learn, was born in space; the first planet he ever set foot on was Mars. When we meet him, like Matt Carse in The Sword Of Rhiannon, Rick is on the run, but in his case it’s from the “black boys” (aka “black apes”!) of “the Company,” aka the Terran Exploitation Company. Another resemblance to Rhiannon is that this future Mars is filled with splinter strains of native life, such as the winged humans who appear in both novels and the Dhuvian snake-men of Rhiannon. But this I think is the only mention I’ve so far encountered of the “black apes,” aka “anthropoids,” which are used as brainless muscle by the Company.

The title of the novel, at least the original title, comes from an ancient Martian “seeress” whose hovel Rick sneaks into while hiding from the apes. She goes into a trance and declares that Rick’s “shadow” will fall over Mars – uniting its people as one and ruling them. Then, as if in denial of her own prophecy, she comes at Rick with a knife and he takes her out with his “blaster.” Speaking of which there’s more blaster-fighting here than in the other Brackett yarns I’ve read, most of which go for more of a Conan vibe with swords and axes and whatnot.

The action opens in Ruh, an ancient Martian city I don’t believe I’ve encountered before; like all the others in Brackett it’s a decayed fossil of its former self, with an Old Town that’s nearly haunted and a New Town filled with strip clubs and bars and the like. In fact, Shadow Over Mars has the first – if brief – sleazy elements I’ve yet encountered in Brackett, as later in the novel Rick walks through the grungy New Town section with its stripper Venusian girls, 3-D cinemas, and various drug parlors. The Venusians don’t come off very well here, mostly used as muscle or as sex objects by the Martians; we also get the mention that they have greenish skin and blue hair.

The novel features a small core of characters, as ever graced with those Brackett-esque names which would be sort of pillaged by George Lucas: a chief example would be Jaffa Storm, a Star Wars name if ever there was one; he’s a “Terro-Mercurian” with skin burned black by the sun, same as  Eric John Stark. But unlike Stark, Jaffa Storm is a villain through and through, a 7-foot sadist with a limp who is telepathic to boot. He’s the main villain of the novel, though we start off thinking it will be Ed Fallon, heartless owner of the Company. However Fallon’s sort of anticlimactically removed from the narrative. On the female front, there’s Mayo McCall, hotstuff brunette babe who is a spy for a Martian rights movement led by Earthman Hugh St. John and his Martian pal Eran Mak. (Yes, the name had me thinking of former actresses turned sex-slaving cultists, too!)

In true pulp style, Shadow Over Mars veers all over the Martian map; I’ll forego my usual belabored rundown of the plot. Rick is basically traded around for much of the narrative, variably captured by the inhabitants of Ruh – who want him for murdering the seeress – to being captured by the Company. In this latter sequence he meets Mayo, and it’s a love at first sight thing, but bear in mind Rick is very much in the vein of the later Gully Foyle, of The Stars My Destination (another pulp sci-fi novel with some narrative resemblances to this one), so there’s a lot of hostility and distrust in this particular love. That being said, Rick and Mayo are barely in the novel together. Also, Mayo isn’t one of Brackett’s more interesting female characters, most likely because she spends the majority of the novel off-page.

Actually two women love Rick – there’s also Kyra, diminutive winged gal who latches onto him in a more poignant subplot than the entirety of the Mayo storyline. For Kyra loves Rick even though she knows he doesn’t love her back – indeed he refers to her condescendingly as “kid.” Further, she knows he’s in love with Mayo. But Kyra is young and resents that Mars thinks itself “old” and dying; there’s a part late in the tale where she says goodbye to Rick, brining up reincarnation and the planet’s future, and it’s one of those heartbreaking moments Leigh Brackett does so damn well.

She also does action and violence well, and there are several such scenes throughout the novel. Rick (rather quickly) lives up to his prophecy and unites the Martians against the Company – that is, after he’s been captured and escaped a few times – and leads them in a grand battle against Jaffa Storm’s forces, Storm having assumed control of the Company. However Brackett doesn’t give this sequence as much focus as one would assume. The smaller, more private battles are the ones that make the most of an impression, like the aforementioned climactic brawl, or a cool part midway through where Rick escapes via “flyer” to the other side of Mars, lands in Valkis (familiar from other Mars tales), and is captured by olive-skinned desert barbarians.

This part comes off like a prefigure of the later masterful novella “Beast-Jewel Of Mars,” with a drugged Rick put on display in a pit for a group of bloodthirsty Martians (Rick having been set up as a traitor by Hugh St. John and Eran Mak). They watch eagerly as the Earthman trips out in various hallucinations, mostly involving Kyra and Mayo. There follows perhaps one of the few instances in fiction in which cigarettes actually save life; Rick regains his thoughts due to the cigarette burning into his hands, and sees that he’s about to become part of the soil that feeds these hallucination-causing plants. Further, the smoke wards off the effects of the plants and allows Rick to think clearly. So he fires up a fresh cigarette and starts inhaling away, crawling off to safety!

Overall though Shadow Over Mars gives a great view of Brackett’s Mars; you’ll find here everything from the desolate, haunted ruins of its beyond-ancient past, familiar from the Stark tales, to the decadent sprawls of its Earthling-populated areas. There’s even a somewhat arbitrary trip to the polar cap, an area drenched in mystery, where the legendary “Thinkers” lay in suspended animation, their minds moved on to a realm of pure thought. This part has the haunted vibe of the later Brackett story “The Last Days Of Shandakor,” but gradually builds up to the brutal fistfight mentioned above, complete with thumb-ripping and severed bodyparts used as impromptu clubs. This part also reminds the Brackett fan of The Sword Of Rihannon, as here too our Earthling hero comes upon ancient weapons of mass destruction.

All told, a lot goes down in these 120 pages of small, dense print, and Brackett never lets up – something’s always happening, and it’s always entertaining. In a mid-‘70s audio interview I recently discovered, Brackett makes a few disparaging comments about her early work. Hopefully she wasn’t thinking of Shadow Over Mars, because I really enjoyed it, and would rank it as one of my favorites yet. And that audio interview is highly recommended, if only to hear her voice, but unfortunately the majority of it concerns her screenwriting work, with her sci-fi writing only briefly discussed. (Note how she perks up at the sudden mention of Eric John Stark 54 minutes in! But sadly the interviewer asks no further questions about the character or his stories.) And I have to give the lady props for not only claiming she “walked out” on Kubrick’s 2001, but for saying that she thought the movie was “foolish!” Perhaps the only time I have ever seen that particular word used to describe the film!
Posted by Joe Kenney at 6:30 AM

I really need to read this one. I've had it for a year or two.

Thanks for reminding me that I need to read or re-read just about everything she wrote. And... That interview is a great find. Thanks for sharing.

Thanks to your review I just downloaded the ebook of this for .99 cents. Can't wait to get started. I've loved everything I've read by Brackett, all thanks to your blog. Thanks!

Thanks for the comments, guys -- Steve, hope you enjoy the novel!