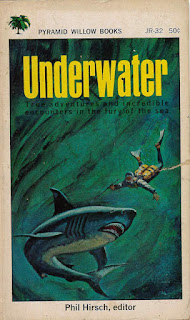 Curiously, this vintage anthology of men’s adventure magazine stories was published through Pyramid’s “Willow” line, which was intended for juvenile readers. So the stories here were written for an adult readership but later marketed to kids. No fears, though, as the tales in Underwater are pretty tame. According to the copyright page, the stories are taken from Men’s Magazine and Challenge Magazine; no individual issues are credited, just the years 1956,’57,’59,’63, and ’64. Phil Hirsch was the editor of these magazines as well as a host of others; his name appears as editor on about a billion paperbacks.

While the cover gives the impression that the reader will encounter many tales of underwater adventurers facing off against dangerous undersea life, in truth the majority of the tales collected here are about guys being trapped underwater or facing other such desperate situations. Stories with speargun-armed scuba divers facing off against sharks are few and far between. I should note that the men’s mags Phil Hirsch edited were not part of the “Diamond Line,” and instead of novella-length pulp tales it appeared that most of them went for shorter, more “factual” yarns. In other words, it would appear that many of these colorfully-depicted incidents actually did happen.

“Sharkbait Swimmer” by Warren J. Shanahan opens the collection (there is no foreword or anything), and this one is about a daredevil named Fred Baldasare who runs his mouth that he’d easily swim the Messina Straits, which are known for being treacherous. Instead he gets in an arduous scuba swim that goes on for hours, sharks tailing him. He fails, but we learn in a postscript that the experience helped him successfully swim the English Channel.

“Diver Hefling’s Ordeal” is by Jack Dugan and is the first of the “man trapped underwater” stories the collection focuses so heavily on. In this one Frank Hefling is deep beneath Chicago, working on something, when his hand gets trapped, followed by his entire body. It’s a tense tale as fellow divers race against the clock to free Hefling before his air tank runs dry.

“Human Torpedoes!” by Sandy Sanderson is sort of a potted history; it’s all about an Italian frogman squadron in WWII that devised torpedoes that could be ridden all the way to the destruction site. Whereas a similar story in the Diamond Line of men’s mags would flesh this out into a pulpy tale, Sanderson instead goes for a more factual approach. We learn the history of the squad, the determination of its leader Lt. de la Penne, and how they successfully bombed an Ally ship off Alexandria, Egypt.

“Man-Eater!” by Wilbur Fergussen improves things in a big way; this one is in first person, which I don’t like as much, but it at least is more along the lines of what I expected from the collection. Fergussen tells us about how the time he was fishing Dade’s Lake in Arkansas and got attacked by…a shark! The story ends up with him in the lake, defending himself with a knife; a hasty addendum informs us that the shark probably got there due to some fresh water channel, which apparently happens.

We get back to the “trapped underwater” angle with “Nightmare In The Tank,” by Don Dwiggins; this ghoulish tale is about a California diver who gets the bends, and a “civilian rigger” attempts to save him. Instead he’s stuck in a decompression tank with the guy, who ends up dying, and the tale takes on a grisly tone as the rigger’s trapped in there with the corpse for a full day, even as rigor mortis sets in. The moral of the story is that from now on a separate door would be added to decompression chambers in case of similar ghoulish events.

“I was ‘Cuda Bait” is by Frederic Sinclair and is another in first-person. It’s the Florida Keys and our narrator tells us how each morning he’d spearfish for pompano for breakfast. But unknown to him a baracuda was in the vicinity, chasing the very same pompano our narrator set his sights on. He takes a shot at the ‘cuda, misses, and his arm gets snared by the speargun cord. So this one too goes for the “trapped underwater” angle despite the “dangerous aquatic monster” setup; Sinclair ends up offering his own foot as bait to lure away the ‘cuda. It ends up snatching off his flipper, and Sinclair makes it to the surface with his dead arm just in time to pass out. A very grueling tale!

“Dive Or Die” is by Edward Nanas and is another WWII yarn, taking place in Caballo Bay, the Philipines, in 1942. But it just goes on and on; it’s about a few hundred thousand “silver pesos” that have ended up on the seabed, and the “Jap” army drafts some POW American divers to go down and bring up the crates. But those wily Americans begin diverting crates to the resistance movement; eventually they are replaced by Moro divers who are more afraid of the Japanese and thus do a better job. Ends on an open note with Nanas informing us that hundreds of thousands of dollars are still down there.

“Dive Down Niagra” is by Frederic Sinclair, and this one is told like a report. It’s about a daredevil named Red Hill who constructs a tire tube craft which he intends to ride down Niagra. The law tries to stop him, reporters flock to the scene, and Hill dies in the attempt, his brains dashed out on some rocks. The end!

“Death Dive” is by Lyman Gaylor and is another “trapped underwater” story. Navy diver Joe Talarico is deep in the Patuxent River in Maryland when he’s trapped, his lifeline caught, and he has to survive several hours. Another grueling tale, but at this point these stories are becoming repetitive.

“Devil-Shark!” by Bob Lorenz is the best tale in the collection; another first-person story, it also apparently inspired the cover art. The narrator and his brother have rented a boat in the Gulf of California, piloted by a superstitious Mexican, with the intent of finding a sunken ship and its treasure. But a monster white shark has been tailing them the past few days; the pilot insists that they not kill it, as it would result in bad omens. But our narrator goes down and finds the sunken ship just as a massive storm is setting in; the climax features him against the shark, which finally has closed in for the kill. He takes it out with an explosive-tipped spear. “I hate their guts!” Lorenz ends the tale, referring to all sharks everywhere.

We get right back to the “trapped underwater” angle with “Ordeal Of The Atlantis” by Don Dwiggins; this one I looked up and can confirm it’s a true story. It’s about a researcher named Hans Keller who has devised an “experimental gas” that might allow for prolonged time underwater. He tests it out with a fellow researcher named Pete Small in a diving bell, but things go wrong and both Small and a scuba diver who attempts rescue die. This one’s a grim tale, and pretty depressing.

“Panic – And I Drown” is by Pete Clark “as told to” Willard Porter, and this one’s at odds with the other stories in that it’s the first-person narration of a surfer riding some hellish Californian waves for the amusement of onlookers. Interestingly the tale is set in ’53, so it’s very early in the whole surfing phenomenon, but again it just doesn’t gibe with the other stories here. But at least it’s not about a guy getting trapped underwater.
Posted by Joe Kenney at 6:30 AM