The President Has Been Kidnapped! (Hot Line #2) 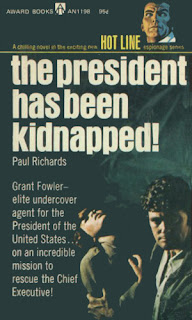 The President Has Been Kidnapped!, by Paul Richards
No month stated, 1971  Award Books

The second volume of Hot Line perhaps indicates why this series never got beyond three volumes. For one, the entire series concept is dropped – that hero Grant Fowler has a “hot line” to the President thanks to a two-way communicator hidden in his cigarette lighter. There’s zero reference to the previous volume and it seems evident the author isn’t even aware of what happened in it.

Again thanks to the Spy Guys And Gals site we know this one was courtesy George Snyder and Dan Streib; while Snyder was also credited for the first volume, his stamp isn’t as evident on this one. Mainly because Fowler isn’t a bossy, arrogant ass; rather, this time he’s prone to fretting and constantly worries over his safety. That is, when he isn’t wondering if he’s fallen in love and should just quit the entire “President’s Agent” game. This stuff is a hallmark of Streib’s work, though, as is inordinate padding and uneventful plotting, all of which runs rampant in The President Has Been Kidnapped. The writing is slightly better than the other stuff I’ve read of Streib’s, so maybe Snyder did some polishing or something, who knows.

Anyway Folwer is re-introduced to us as a 39 year-old with receding brown hair who often considers himself “getting too old for this” and contemplating retirement, yet another recurring Streib staple. He goes to great lengths to pose as an “international wheeler dealer,” and when we meet him he’s negotiating the purchase of an airline. It occurred to me that this novel might’ve been written at the same time as the first one, or maybe Streib just didn’t even read the first one, but anyway it seems great effort is made at introducing Fowler and setting up his character, whereas we already met him in the previous book.

Fowler also now has an assistant, Matthew Lemon, who handles his finance matters; “Grant hated the frail man and his bookkeeper mind.” As if that weren’t enough vitriol, Lemon is later referred to as a “sissyish little accountant.” But Lemon seemingly blows the airline deal, barging in on the conference with news Fowler doesn’t want shared, and thus he’s left with an airline it turns out he didn’t even want to buy – it was all a show, part of his carefully-maintained cover. Turns out the government is going to handle the cost, as Fowler’s services are needed pronto, no time for fancy wheeling-dealing; that Fowler is the “President’s Agent” (his recurring title throughout the book, which makes me suspect this was perhaps the planned series title) is a secret no one knows save for three people, one of whom is the President.

So Fowler puts on his shoulder holster with its .357 Magnum (because nothing says “secret agent” like a bulky hand cannon beneath your left arm) and heads for the White House, where he eventually learns from Secretary of State Michael Kremky – one of the three people who know who Folwer really is, with the President’s matronly secretary being the third – that not only has Air Force One been skyjacked and taken to the banana republic of Conduras (which is between Cuba and Panama, we’re informed), but that the President himself happened to be onboard at the time; something known only to Kremky.

Fowler’s job is to head to Conduras on one of his newly-acquired airliners, posing as a businessman looking to branch out into this new market, and somehow orchestrate the President’s release. Conduras, described by Fowler as a “voodoo den,” is run by a despot named Juan Bahia, who keeps the people in tow; the island is comrpised of “Creoles, Caribs, and blacks.” Fowler puts together a crew on one of his new planes, including arbitrarily enough some dude who used to go adventuring with Fowler in the old days, and a couple busty stews. The Conduras air force shoots them down upon entering Conduran air space.

Here’s another thing about Grant Fowler – he comes off like a complete idiot. Maintaining his playboy cover by all means, he insists the plane keep approaching Conduras, despite repeated warnings from ground control. This results in the airliner crashing, his old pal getting killed (again, one helluva an arbitrary “plot point”), and even the stews getting horrendously injured. Only mousy Matthew Lemon emerges unscathed, but he too will suffer misfortune, as if Streib relishes in occasionally putting him through hell before delivering an almost perfunctorily coup de grace in the final pages. But Fowler of course isn’t injured at all in the crash, and emerges to find Conduras on the verge of revolution.

The novel trades off on “tense” scenes of Fowler hopscotching between the tyrannical forces of Bahia and the native rebels, led by a voodoo priest named El Vicera. It just sort of goes on and on in a permanent spin cycle. We’ll go from the rioting voodoo worshippers to the debauchery of Bahia’s circle. In each instance Fowler finds himself involved with a woman – for the voodoo folks, it’s an “olive skinned” babe with blue eyes named Angela who has an instant lust with Fowler as soon as they see each other, culminating in one of the novel’s few memorable scenes as the two have sex in the middle of the jungle as Bahia’s soldiers hunt for them. The sex scenes by the way aren’t very graphic at all; “She pulled him in to the hilt” and the like.

The other babe is Consuela, Bahia’s incredibly depraved teenage daughter. She’s the type of whip-wielding villainness I like so much; moments after meeting Fowler she’s trying to screw him, and when he turns her down for being a “kid” she’s begging her dad to have him killed. Humorously, Fowler and Consuela have sex, though Streib forgets to inform us of the event until several chapters later – this happens after an elaborate feast Fowler attends, Bahia treating him as an honored guest, given Fowler’s cover as a wealthy businessman looking to branch out into Conduras. After a serving girl is nearly raped for the eager crowd – something Fowler prevents from happening – Consuela leads him off to his room, and only much later does Streib bother to inform us what happened there.

Really though it’s because Fowler has fallen in love with Angela, who is a sort of white goddess for the voodoo-practicing rebels. Fowler is saved by her in their first meeting – which leads to that immediate boink in the jungle – but Angela says Fowler will be considered an enemy if he tries to meet with Bahia. But this Fowler must do, so as to get aboard Air Force One, which, by the way, is sitting on the Conduras Airport tarmac under heavy guard. We’ll eventually learn that Bahia orchestrated the skyjacking, abducting the child of a crew member to ensure complicity. Bahia’s goal is to get the US to turn over control of a supply ship which carries atomic weapons. Bahia however doesn’t know that the President is actually onboard the plane; in fact, no one knows save for Fowler and Kremky back at the White House, but despite this Bahia’s men have wired Air Force One to blow by a certain deadline if his demands aren’t met.

Streib attempts to broaden the action with cutaways to Kremky back in Washington, dealing with various politicians and military officials who want to nuke Conduras. We also have some scenes with the President, fretting aboard his plane. But it’s all just sort of bland and uneventful. Even the occasional action scene is harried and boring, mostly comprised of Fowler trying to run away and hide. Again, he’s lost a lot of the bad-assery he displayed in the previous book, and this is certainly the work of Streib, who is notorious for wussified protagonists. Otherwise there are a few oddballl touches here and there, like Bahia’s personal guard, in black uniforms modeled after the SS; all of them, Fowler notices, have “long, slender fingers, perfectly manicured…the hands of classic homosexuals.”

Even the rebels do the heavy lifting in the finale; Fowler has promised Bahia that supply ship – on orders from the President – but he’ll give the weapons to the rebels. This he promises Angela after another jungle boink. Oh, and Fowler loves her for sure, even begging her to come back to the US with him and get married! This is Streib for sure, folks, and even a newbie to the genre will know what happens to Angela by novel’s end. The finale is pure chaos, with the rebels storming the tarmac before the explosives can go off, and Fowler just managing to get aboard – here Streib pulls Matthew Lemon back into the narrative long enough to kill him off!

Fowler exceeds in freeing the President and Air Force One and preventing Bahia from getting the atomic weapons, but at great price, yadda yadda yadda. No surprise, poor old Angela didn’t make it out on the plane – but another female character did. Given that we’ve learned this particular gal can do “special things with her mouth,” you wonder why Fowler’s so upset. (Okay, spoiler alert – it’s Consuela.) But really it’s the reader who benefits, ultimately, because here the novel ends.

Only one more volume was to follow, courtesy Streib and Chet Cunningham, and here’s hoping it’s better than the others. But given the two authors I’m not holding my breath.
Posted by Joe Kenney at 6:30 AM

Brad Thor's the Lions of Lucerne also dealt with the kidnapping of the President.

Too bad this hasn't happened now. ;)