Our Spacecraft Is Missing! (Hot Line #1) 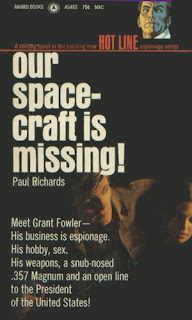 Our Spacecraft Is Missing!, by Paul Richards
No month stated, 1970  Award Books

Yet another series “produced” by book packager Lyle Kenyon Engel, Hot Line was also published by Award, who had met such success with Engel’s earlier series Nick Carter: Killmaster. But Hot Line clearly failed to strike a chord with readers, only amounting to three measly volumes over just as many years.

First of all, a big thanks to the essential Spy Guys and Gals website for the info on who wrote this series, as information is scant. According to that site, this first volume was a collaboration between George Snyder and Jon Messmann, two authors who around this time were also working for Engel on the Killmaster books. But if I had to guess, I’d say Snyder was more responsible for Our Spacecraft Is Missing!, given one key piece of evidence: the “hero” of the tale, secret agent Grant Fowler, is an asshole of the first order.

Snyder as we’ll recall excels at delivering assholic protagonists – the hero of his Operation Hang Ten series (another Engel joint) is a complete prick, as was Snyder’s version of Nick Carter in Moscow. So then Grant Fowler is cut from the same cloth: a bossy, arrogant, smart-assed loudmouth, and it would be one thing if the dude could back it all up, but honestly he proves himself to be a buffoon in Our Spacecraft Is Missing!, about as ineffectual a hero as you could get. Shit, the dude’s almost dead by the final pages, shot to pieces, and you couldn’t care less.

Anyway, Fowler’s bit is that he’s the top agent for the Presidential Service, not to be confused with the regular ol’ Secret Service. He answers directly to the president and is the man’s go-to guy for dangerous international missions. So in other words the series very much has that Lyle Kenyon Engel flavor, with the lone wolf-type reporting to the older, powerful male who sends him off around the world for this or that. The “Hot Line” of the series title is in reference to Fowler’s direct line to the president, courtesy his portable scrambler set, and Fowler also has another hot line: a special cigarette lighter which opens a direct audio channel link to the president.

Only two other people know of Fowler: Margaret, the president’s motherly private secretary, and Secretary of State Mike Kremsky, who doesn’t get along with Folwer very well. (But then, not many people do.) Fowler himself is somewhere in his 30s and has a scar that runs from the center of his forehead down to his right eyebrow. He has a busy backstory of warfaring and adventuring, but came to the president’s attention two years ago, due to the action in Nigeria, where Fowler managed to drop a shipment of food on a children’s orphanage. Also here an injured Fowler tried to put the moves on an attractive redheaded nurse named Kelsey Bowen, but she turned him down.

Fowler’s worked as the president’s troubleshooter for two years, but this current assignment is his biggest one yet: in a riff on the Bond film You Only Live Twice (which has nothing in common with the original Fleming novel, really), both US and Soviet spacecraft has been disappearing from the sky. Three US craft and three Russian craft have been apparently vaporized, and the countries are blaming each other – the Russians think the Americans are shooting down the Russian craft and lying that they’re also losing craft of their own.

Fowler is tasked with finding out what the hell’s going on. After lots of research he ends up in the Australian outback, which is where he suspects the crafts were being shot down from. Many pages are given over to Fowler interviewing one-off characters. However Fowler is a complete ass throughout; there’s a laugh-out-loud moment where, when he first meets the scientists at a tracking station in Houston, he snaps at them for lying around and drinking coffee, when meanwhile they’ve been working several-hour shifts and are finally taking a well-deserved break.

While roaming about the outback Fowler bumps into a familiar face – would you believe Kelsey Bowen, the nurse he put the moves on two years ago? She’s carried a torch for Fowler ever since reading about that food-for-the-orphanage stunt he pulled in Nigeria, which she wasn’t aware of back then. But Fowler succeeds in pissing her off, too, particularly when he starts bossing around the young doctor she now works for as part of a sort of roaming doctor service for the outback – if someone here in the hinterlands gets hurt or sick, they make a call and then Kelsey and the doc hop on an airplane and head there.

Many pages are given over to Fowler flying around with these two. Snyder is as ever unconcerned with much action, and when he does get around to it, it’s generally of the fistfight variety. Along the way Fowler keeps hassling Kelsey for sex…she apparently enjoys leading men on and then backing down, something for which Fowler calls her out in a scene that would make many readers uncomfortable in our current era. For after being shot at by an unseen assailant during a sandstorm in the outback, Fowler and Kelsey hole up in a remote shack and there Fowler basically forces the girl into having sex with him!

“All right! Take me! And make me love it!” The girl finally screams after Fowler has successfully bullied her for several pages; he’s not going to take no for answer like he did on that hospital bed in Nigeria way back when. The ensuin’ screwin’ is fairly explicit for the time, but nothing too major, though we get enough detail to know the lady does in fact enjoy it. Afterwards Fowler basically sees Kelsey off and gets on with the investigation. Turns out he winged his unseen assailant, due to the blood trails all over the place; Fowler’s gun by the way is a .357 Magnum, which he carries in a special shoulder holster. Surely there are better, more compact handguns for a secret agent?

Along the way Fowler’s also gotten in a fight with an “Oriental,” one Fowler suspects is a Red Chinese agent, but after a brutal fistfight the man takes a cyanide pill and kills himself, so there’s another lead that goes nowhere. There isn’t much action at all for the majority of the book; even after the shootout with the mystery man in the sandstorm, which turns out to be a muscular KGB agent, the book sort of plods along more so on a suspense angle. Fowler finds himself at the sprawling ranch of the Graftons, in the middle of the outback wasteland, a secretive place with armed guards.

The Graftons are Ebert and Annalise; the former reclusive and unseen by Fowler, the latter an ugly, mentally-retarded woman who takes an instant shine to Fowler and pleads with Ebert to let him stay, so she can have sex with him. Fowler leads the horse-faced girl along while Ebert’s out, and it’s all very hard to buy. Annalise practically just lets Fowler roam around the ranch, looking for clues. Anyway, he discovers a massive rocket, and deduces that Ebert Grafton is shooting down the spacecraft.

Ebert and Annalise are the children, Fowler learns, of Graf von Tohn, aka Count von Tohn, a Nazi sadist who fled to Australia after the war. “Graf” plus “Tohn” has become “Grafton,” and now son Ebert (the old count long since dead) plans to win the war that Hitler lost. Here in the final pages it all becomes, too late, like a Bond movie: Ebert, the mad genius, not only has a headquarters built in a mine shaft, but also has an army of aboriginies, “biochemical experiments” who will serve him as “an army of violent cannibals.” Where the hell have they been for the past 140 pages??

The “cannibal” nature is displayed posthaste, as the aboriginies eat the poor KGB agent, Fowler unable to stop them in time. Here in the final pages Fowler finally lets loose with his Magnum, shooting cannibals down left and right, but unfortunately Snyder isn’t one for the gory details. It’s more along the lines of “Fowler shot two of them down,” and such. The sendoff for Ebert is also pretty anticlimactic, with a perennially-incompetent Fowler just standing there while the madman rants and raves about how his latest rocket is certain to initiate WWIII. When Fowler finally acts it’s too late and the damn rocket is launched, headed for a fatal meeting with a manned Soviet craft.

Fowler, gutshot and dying, by the way(!), forces himself into action and initiates a call to the president via his lighter gizmo. WWIII is averted and meanwhile Annalise sets herself on fire(!?). And Fowler is nearly dead, shot in the arm and the stomach in the course of the book, leaking blood badly. (Don’t worry, though; Kelsey shows up and gives him some “broth” to drink – some nursing skills she has, huh?)

Fowler must’ve been badly hurt, too, as it was another year until the second volume of the series was published. Let’s hope that one will be beter. But at least, at 156 pages of big print, Our Spacecraft Is Missing! is a quick read.
Posted by Joe Kenney at 6:30 AM