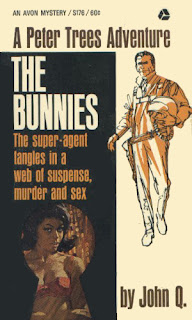 Billed as a “super-agent” on the cover, Peter Trees was yet another in the long line of would-be Bonds who followed in the wake of Ian Fleming’s death in 1964; in fact, according to a 1965 interview with creator/writer John Quirk in the Palm Beach Post (which unfortunately is no longer online – thanks a lot, Google Books!), the character was specifically devised to fill the void created in the realm of pulp spy fiction by Fleming’s death.

The only problem is, whereas Fleming, when he was on form, was capable of delivering a thrilling tale, John Quirk, at least in this first volume, turns out a total snoozer of a book, about as exciting as the average episode of Antiques Roadshow. The guy can write, though, with clever dialog and good scene-setting, but the plot is uninvolving and the characters are unlikable. You do have to love though how Quirk (branded as “John Q.” on this and the second volume, but the book’s copyright John Quirk) poses as his hero on the back cover, complete with flight suit and helmet.

Also according to that above-mentioned interview, Quirk’s original title for this one was The Black Box, which turns out to be a contraption hero Peter Trees spends the entire novel seeking. Likely Avon changed the title to The Bunnies to capitalize on the Playboy Bunnies Trees encounters at the Detroit Playboy Club, though the cover artist didn’t really capture that – you’d never guess the attractive, half-nude black lady on the lover left corner is supposed to be a Playboy Bunny. She doesn’t even have on the bunny ears! But she does appear in the book, where she is referred to as, believe it or not, “the Chocolate Bunny.”

Anyway, Colonel Peter Trees is a hotshot jet fighter pilot, I believe a WWII vet, who is a millionaire himself but serves as the personal pilot for a billionaire named Michael Archangeli. Trees is quite idealized and in many ways this series is like the later Don Miles, just replacing race cars with fighter jets. Trees has a Crusader jet which he bought from a general in a south Asian war; Trees used to fight periodically in anti-Commie wars, which is where he was serving when approached by Archangeli. This is all relayed via backstory; when The Bunnies begins, Trees has been working with Archangeli so long that he’s basically assumed control of the man’s business empire.

The book is less focused on action and more concerned with “business talk.” Over half of the novel is composed of mundane business meetings and recaps, very similar to the page-filling stuff in Harold Robbins’s  The Betsy and The Adventurers. Trees likes to sit around with Archangeli, “Count” Colombo (Archangeli’s chaffeur), and Arnold Stillwater (head of the Markel Division, a family business he just sold to Archangeli), and “talk business.” But most prominent in these conversations is Jo Court, sexy young secretary for Archangeli and a determined woman decades ahead of her time.

Jo Court must have seemed interesting to readers in 1965, but today she’s as common as bread: a woman who puts work over marriage, career over love, and is determined to prove her worth. She has a contentious relationship with Trees, smarting off to him from first page to last. She was being groomed as Archangeli’s successor, it develops, and thus resents Trees for taking the spotlight from her. I lost track of the number of times these two would politely spat with one another – “Mr. Trees” and “Ms. Court” is icily repeated ad naseum throughout the text, as this was all before the days of first-name-basis in the workplace – and it gets old quick.

Quirk I believe was a WWII vet, so it’s interesting how this guy was able to create such a forward-thinking character in Jo Court…but then he has to go and ruin it with the revelation that Jo’s screwing Mr. Archangeli as part of her job. She even comes on to Trees after another of their periodic spats, though Trees turns her down.

As for Trees, he’s kind of an ass. Very much the straight-jawed, humorless, buzzcutted military man demanded by postwar fiction, there isn’t much likable about the dude. While he spends the majority of The Bunnies in “investigator” mode, he is in fact a spy, something Archangeli doesn’t even know. Reporting to the mysterious Program Committee, Trees’s boss is a dude named Broderick Whitehead but Trees usually answers to the President himself. Not that any of that matters this time, as, rather than a tale of international intrigue, Trees gets involved in a case that’s more along the lines something Mike Hammer would deal with.

As part of his own corporate maneuvering Trees has gotten in touch with a dude named William Bottle, who has designed this “fuel injector” gizmo. Be prepared for lots and lots of expository dialog explaining and describing this thing, which hasn’t even been built – Bottle, who was supposed to meet Trees and Archangeli for the first time in Detroit, turns up dead, and now Trees is on the hunt for the “black box” which apparently contained Bottle’s prototype model of the gizmo. But Trees suspects foul play, as his Crusader jet was sabotaged on the flight into Detroit and it was only his bad-assery which prevented a crash.

The novel plods along as Trees follows clues in the search for who Bottle was, what his fuel injector gizmo was, and who else might’ve wanted it, while trading barbs with Jo Court. Gradually he comes upon a clue about “the chocolate bunny,” which as mentioned turns out to be a black Playboy Bunny named Kelly O’Brien, who knows more about the case than she first admits. Trees also becomes involved with another Bunny, this one named Norah Huddle, who initially is hired by goons to pretend to be someone else so as to fool him.

Trees per tradition is a world-class lover of the ladies, by the way, but don’t expect much naughty stuff. He scores a few times in the book – with Norah Huddle, even with Bottle’s widow (a man-eating cougar who hasn’t seen her husband for years) – but John Quirk isn’t one for the details. Instead he just ends the chapter right as Trees is about to score and then picks up the story the next morning or whatnot. The same goes for the violence, with Trees taking some punishment via torture and also killing a few people with his throwing blade or magnum revolver, but none of it is very descriptive and certainly not graphic.

You see, Trees is bland, so trained and precise as to be robotic, and this blandness unfortunately bleeds over to the narrative style itself. There’s some interesting stuff, like how Trees suffers from PTSD thanks to briefly being a prisoner of the Viet Cong, but the novel is more about Trees the alpha male and his smart business moves and smart business strategy. I had a hard time engaging with this particular hero; he seemed more like one of the humorless WWII vets who used to congregate in my dad’s barbershop when I was a kid and talk about how we should bomb Japan again.

But while I didn’t like the slow-moving plot, which as mentioned is more along the lines of a murder-mystery than spy action, it must be said again that Quirk is a good writer. He peppers The Bunnies with many memorable dialog exchanges, like for example Archangeli’s comment to Trees when he comes to south Asia to hire him: “Patriotism is a laudable immaturity.” In fact Archangeli talks like this throughout, like a Bond supervillain, and he’s more interesting than Trees himself.

Anyway, two more volumes were to follow; in that interview above Quirk mentions he was in the process of writing the third volume, so I’m curious if he just didn’t write anymore due to low sales. The third volume not only had a completely different cover treatment than the first two but was also published by Signet, so I’m assuming the Peter Trees novels didn’t perform very well. At any rate Quirk himself died in 1969, so no further novels would be forthcoming anyway.
Posted by Joe Kenney at 6:30 AM

Does that mean the name is up for grabs

I tried to read one issue of this series, but couldn't take it. I forget the title, but I never picked up another in this series.