The Spider #20: Reign Of The Death Fiddler 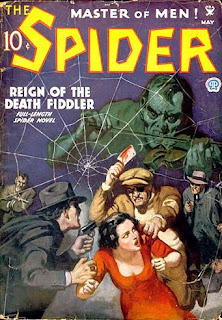 The Spider #20: Reign Of The Death Fiddler, by Grant Stockbridge
May, 1935  Popular Publications

I had low expectations for this volume of The Spider – I mean it’s got “Death Fiddler” in the title – but it turned out to be one of my favorites yet. Despite the goofy premise, Reign Of The Death Fiddler is actually one of the more ghoulish titles in the series, complete with a titular villain who likes to dress up as his intended victims (complete with bullet holes in his head and body) and decorates his lair with corpses.

One thing to note is that this time Norvell “Grant Stockbridge” Page takes a little time to focus on continuity, mentioning previous adventures and also confirming that the Spider’s “look,” ie the hunchback, fangs, and scraggly hair, is now no longer known as the old “Tito Caliepi” disguise (which Page mentions everyone has forgotten), but has become the standard Spider ensemble. We also get lots of reminders how Richard Wentworth’s loyal pal Jackson was killed in a previous volume (one I haven’t read). Also, this volume dispenses with the “story takes place in the same month as publication” setup the others have followed; the events occur over several weeks.

This one opens three months after the previous volume, and as usual things have already gone to hell. Wentworth has spent all these months trying in vain to figure out who the new crime boss is in New York; whoever it is has organized the crooks into such a lightning force that the cops are, as ever, incapable of stopping them, with blatant acts of violent crime staged on city streets in open daylight. Plus there seems to be some corruption in the city’s political realm which is enabling the criminals. As for Wentworth, he’s stymied because, due to this same corruption, he’s lost the license to carry his pistols. So he has resorted to his other mainstay: disguise. For the past several weeks he’s lived in the Bowery, posing as “Limpy Magee,” which by novel’s end will be known to the public as one of the Spider’s many alternate names.

The book opens already displaying the brutal tone which will recur throughout; Wentworth, in the Bowery, spots a carjacking in progress, and takes out the hoodlums in vicious manner, using their own guns against them. Things get even more ghoulish when the infamous Fiddler finally appears at a grungy underworld bar Wentworth, still as Limpy, has won access to, given his assistance to a low-level criminal. The Fiddler looks like a corpse, with a gash in his head and bloody clothes. He’s dressed as his next victim, Wentworth realizes.

Page has this annoying bit early on where Wentworth has the chance to kill the Fiddler a few times, but always decides not to, so as to gauge how big the criminal’s empire really is – yet there are also recurring scenes where Wentworth will wish in frustration that he could kill the Fiddler and be done with it. Meanwhile our hero further ingratiates himself into the underworld by staging the murder of a cop who wanders into the bar; defying all laws of reality, Wentworth shoots the poor guy right in the face, yet angles the shot so it just knocks him out(!), then squirrels away the “body.” The cop will gradually figure out that Limpy and the Spider are one and the same, and will become an ally/opponent of our hero as the narrative ensues.

Meanwhile Wentworth is also busy fending off the advances of a “trollop of the underworld:” Snakey Annie, a hotstuff gun moll (curiously always described as “dark”) who hangs out in the bar, has murdered a few people herself, and who is all hot and bothered over how Limpy is such a rising star in the criminal sphere. Brace yourself for this one, folks – I do believe Richard Wentworth gets laid. Seriously! Late in the narrative, even though he “shudders” inwardly at the thought of even touching Annie, Wentworth actually goes off with her, taking her back to his place in the Bowery…and Page ends the scene there. I mean to say, no part where we find out that he knocked her out when he got her there, or pulled some other Spider-madatory duplicity to get out of something the plot is leading toward. Indeed he sees it all as part of his “duty,” even though he detests her. But after this she disappears from the narrative. Hmmm…

As for Wentworth’s actual girlfriend, Nita van Sloan as ever is given short shrift in these early volumes; she has a memorable entrance, proving her own gift for disguise. Going about as Limpy, Wentworth runs into an old woman, who turns out to be none other than Nita. She’s come here, expressly against Wentworth’s orders, to see how her fiance is faring in the Bowery. Later she plays a part in the climactic event, which concerns a Fiddler hit on Macy’s. As for other recurring characters, Commissioner Kirkpatrick is basically bullied into quitting his post, and also advised to run for Senator, but then he’s shot in the gut and spends the rest of the novel in ICU, at death’s door. No doubt none of this will be mentioned in the next book.

But for such a basic setup, Reign Of The Death Fiddler has a lot of entertaining scenes, like when Wentworth, who as Limpy is being groomed as a new flunky, visits one of the Fiddler’s headquarters and finds gruesome effigies of past victims all over the place There is also the usual supernatural vibe to the tale, like when Wentworth discovers that bullets can’t kill the Fiddler – who by the way is “the most cunning and evil foe” the Spider has ever gone up against. That’s a line used in practically every volume, but the Fiddler is pretty cunning, apparently keeping the entire city government in tow, but this plot will be squandered by volume’s end.

The last quarter features several lightning raids the Fiddler’s men make on various places, from the Metropolitan to Penn Station to Macy’s. Early on Wentworth realizes he’s being tested by the Fiddler, being given info on that night’s hit, the villian clearly seeing if “Limpy” will blab the info. So there is added tension where Wentworth must decide if he will indeed spread the word, and if so how he could do so without giving himself away. In the end though he can’t take it anymore and outs himself in typical fashion for the series – he takes a knife right to the Fiddler’s head, only to discover it’s just a wax dummy.

Throughout these raids Wentworth keeps seeing a figure in the melee that looks sort of like Jackson, his dead best bud. Then in the climactic fight at Macy’s, guess what – it is Jackson, who is tearfully reunited with Wentworth and crew. Apparently he faked his death for some convoluted reason, having to do with protecting Wentworth’s name or something, and Ram Singh was aware of the ruse all along. This though isn’t as memorable as what comes before, when the Spider catches the Fiddler in a noose, uses him as bait to keep his men at bay, and then breaks the bastard’s neck – but, as again is typical for the series, it’s not the Fiddler after all, but another stand-in.

In fact the finale is pretty underwhelming, featuring the usual red herring “surprise reveal” of who the Fiddler really is. And Wentworth doesn’t even deliver justice; that honor goes to one of this volume’s supporting characters. But overall this one’s pretty fun, with action that doesn’t get as repetitive as such scenes normally do in the series. There is also a ghoulish tone throughout which adds an extra spark. Too bad though that Snakey Annie isn’t better featured in the narrative (she basically disappears), but there’s always the chance she could appear again in a future volume, if Wentworth continues his “Limpy Magee” double life.
Posted by Joe Kenney at 6:30 AM

“Limpy Magee” sounds like a character name Brendan would come up with on “Home Movies.”