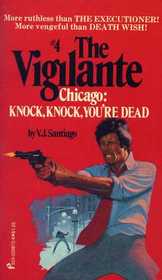 Three short weeks after the first volume and two days after the previous one, antihero Joe “The Vigilante” Madden heads to Chicago, where he can kill more criminal scum. At this point Robert Lory wants it to be clear that Madden is nuts; whereas before Madden at least made gestures toward protecting society and the like, now he’s practically a thrill-killer. This time his stated goal is to kill FALN terrorists who are targeting banks, but the somewhat messy plot has him ultimately taking on the merciless crime boss who finances them.

Madden’s back in New York for the first time in a few volumes, and we get to see how his coworkers at the engineering firm are just as casual about that whole “sorry your wife was brutally murdered” thing as ever. Instead it’s all about the job – Madden’s to be sent off to Chicago to help another client, a bank that’s looking for tips on video surveillance. Also, shortly after this Madden will be sent to Detroit, so we’re given a hint of where the fifth volume will take place. I’d imagine then that at this point Lory felt comfortable enough that the series would continue, thus was planting seeds for future installments. Unfortunately, the next volume would be the last!

This is most apparent in a subplot featuring Sgt. Leo Delancy of the NYPD, returning from the first volume. Delancy is the cop investigating the murder of Madden’s wife, the trio of punks who did it thus far having eluded capture. Delancy calls Madden into the station because his credit card, stolen that night, turned up, and Madden checks out a lineup to see if any of the men on display are the ones who killed his wife and stole his wallet. None are, however Lory here appears to develop a thread that Delancy might be coming after Madden himself.

Humorously enough, Delancy casually discusses the pile of cases he’s working on – one of which happens to be the stuff that went down in the second volume. This is because Madden has been doing his vigilante work with the same revolver he appropriated in the first volume, not realizing the bullets he left behind would eventually be matched up. Delancy tells Madden that whoever did all the killing in New York and Los Angeles surely wasn’t a professional, as a pro wouldn’t be stupid enough to use the same gun across the country. It’s not hinted that Delancy suspects Madden, but it’s definitely a setup for future developments.

Madden finally dumps the .32 in the Hudson and bullies an underworld fence to rassle him up some new guns. He still has the Mauser from the second volume, but this is a ‘70s crime novel, so a revolver is demanded; the fence gets him a .38 Colt, which Madden doesn’t like as much as he did the .32. We get more of those flashbacks to simpler times when Madden simply hides the guns in his check-in luggage for the flight to Chicago. Lory proves again he’s a savvy men’s adventure writer, not wasting much of our time with the whole “engineering” schtick; Madden appraises the situation, learns about recent FALN terrorist bombings in the Chicago area, and helps out with video surveillance setup.

Instead the focus is on Madden hunting down the terrorists on his own, but here Knock, Knock, You’re Dead sort of loses its way. That being said, this one’s pretty sleazy at times, so it has that going for it. This is demonstrated posthaste, as Madden follows a teenaged FALN bomber back to his place, makes him call his superior to arrange a meeting, and then blows the kid away. Later Madden stakes the meeting place out, watching from a dive bar where the blonde bombshell waitress, a former hooker named Jean, gives him free booze and makes interested remarks. Apparently that horrific scar Madden has across his face is quite the turn-on for certain women.

This unexpectedly leads to the novel’s first sex scene, and the most explicit one yet in the series – but not with Jean. Madden sees a sexy hispanic gal wandering around the meet place, then abducts her, takes her to a sleazy hotel, and starts slapping and punching her around for info. You guessed it, folks, this turns her on good and proper. Before you know it, she’s naked and begging Madden to do her. This he does, for a few pages of graphically-depicted sexual a-happenings, Lory actually detailing back-to-back bangings, like this was The Baroness or something. He also works in the “man’s conquest” theme he explored in the John Eagle Expeditor entry The Glyphs Of Gold, which also featured a sexy Hispanic babe “challenging” the hero’s masculinity by seeing how long he could last in the sack – or, as Lory puts it, “to see who drains who.” Of course, just like John Eagle, Joe Madden proves his worth, and then some.

Madden is increasingly becoming the most obnoxious “hero” in men’s adventure fiction; after boffing the girl, Juana, into wilting submission, he gets more info out of her about her FALN comrades – and when she relays that her kid brother was recently murdered, Madden happily informs her that he was the one who pulled the trigger! Also throughout the novel he bullies and bosses people around, even beating Jean’s boss at the restaurant to a pulp when he goes back there later on and insists she drop everything, walk out of her job, and go to a nearby hotel for some quick sex(!). Also, I wondered why Lory named his sole two female characters so similarly (Jean and Juana), but figured it must’ve been like a theme or some other sort of literary trick that escaped me. But the two characters never meet so it doesn’t get too confusing.

Part of Madden’s assholishness is just a play; for some reason he decides to bluff it that he’s a Mafia rep, and he’s cornering these FALN bombers because they’re hitting property that belongs to his “family.” It’s kind of goofy, but the terrorists, just kids, go for it. It gets even goofier when Madden meets the chief bomber in a park and bullshits the kid that he, Madden, has a sniper hidden in the distance with a bead on the kid’s head, and one wave of Madden’s hand and it’s bye-bye commie terrorist! But here’s where things get sloppy. The terrorist is really looking to branch out of the whole commie thing, and to auction off his bomb skills to the highest bidder, his most recent employer being a shady entrepreneur named Jake Pontis.

So we’ve bounced all over the place at this point – including even arbitrary bits where Madden goes out into the nighttime city to randomly kill creeps and crooks – but Lory has now settled on Jake Pontis, not the FALN, as being the main threat Madden’s up against here in Chicago. But here his bullshitting technique doesn’t work out. In the novel’s most tense sequence, Madden tries to bluff Pontis with the usual syndicate stuff, when Pontis immediately calls him out on it and declares that Madden’s just a phony, one whose time it has come to die. Then Madden finds himself in a desperate fight against a couple thugs and crooked cops, but it’s all in a pitch-black park and relayed more via the tension and fear than slam-bang action.

A recurring idea in The Vigilante is that Madden gets by on luck, but at this point it has worn a little thin. He of course manages to escape the park ambush but it’s really because the villains decide to turn on each other. At any rate it leads to another tense sequence, where Madden corners the FALN bombers, including Juana, while they’re on a job. Here Madden displays his cold roots, in particular so far as Juana is concerned. But still, something is lacking here, and I’m pretty sure it’s because Madden just doesn’t seem as driven. He’s out there killing crooks with the best of them, but there’s just no impetus for him to even be here – I mean this guy’s gone up against muggers and rapists and white slavers; why’s he suddenly taking on a big-time crook who plans to bomb his own factories for insurance payoffs?

But at least there’s a nice sleazy vibe throughout (even down to off-hand weird stuff like Pontis being described as looking “like a girl-type bitch”). Madden also finds the time to shack up with Jean, and here Lory builds up a growing relationship between the two, with Madden even wondering if he’s falling in love. It’s to Lory’s credit that, while he goes the expected route of Jean being abducted in the final pages, he doesn’t deliver the expected Death Wish-esque payoff. Instead, Madden gets to play the hero, and while it’s just him up against two thugs, it still packs more tension and entertainment than the typical “one man army” action scenes of the men’s adventure genre.

Overall I enjoyed Knock, Knock, You’re Dead, same as I have the other entries in the series, but this one seemed a bit muddled when compared to the previous books. Hopefully Madden will get back to his safe space next time. And finally, this is the first installment to feature a painted cover. Not the greatest ever, with Madden’s bizarre grimace and that massive tie he apparently borrowed from a clown. Bring back the bored-looking cover model!
Posted by Joe Kenney at 6:30 AM

I believe there are 6 books in the series, with the last set in Washington, DC.

Dammit, you're right!! Seriously though I forgot about the sixth volume, "This Gun For Justice," even though I have it (and mentioned there were six of them in my other reviews!). There was a Chopper Cop/Liquidator thing with this series, in that the last volume came out a few years after the previous ones -- the sixth one's from '78, so I figure the oil shortage had something to do with it, per Michael Newton's comments in his "How To Write Action-Adventure Fiction." Thanks for the comment!