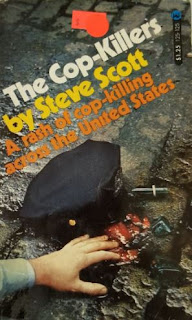 The Cop-Killers, by Steve Scott
No month stated, 1972  Manor Books

“We got a new manuscript from that book packager guy, Lyle Kenyon Engel. Somethin’ about commie terrorists killin’ cops. Waddaya think we should do for the cover?”

“Lemme think a minute…okay, how about a closeup photo of a hand on the ground, with a broken bottle beside it, so you get the idea this poor bastard just got his clock cleaned…and we’ll have a cop hat lying there with the badge showing, so you know it was a cop. And a bunch of blood everywhere, so you know he’s dead…maybe some bloody gobs of brain matter, too.”

-- Possible conversation in the offices of Manor Books, 1972

One of the earliest novels published by William Crawford, here posing under yet another pseudonym, The Cop-Killers was part of an obscure “series” book producer Lyle Kenyon Engel created in the early ‘70s titled “The Now Books For Today’s Readers.” I’ve only been able to discover four books in this series, and three of them were written by Crawford under various pseudonyms: The Wasters as by Bill Williams (Macfadden Books, 1972), The Dynamite Freaks as by Donald Ryan (Manor, 1972), and this one. (The fourth, High Heaven by Peter Harmon, is also from Manor in ’72 but it’s so scarce I have no details on it…but Justin Marriott has a copy! Per the Catalog of Copyright Entries “Peter Harmon” is also a pseudonym, so it might be Crawford again.) Like other Engel productions, this series started life at Macfadden-Bartell but went over to Manor when Macfadden folded.

The so-called “Now Books For Today’s Readers” were basically the same as the standalone crime paperbacks Engel would later “produce” in the ‘70s, so I’ve tagged them thusly for convenience. They’re really the same thing: for the most part, lurid crime thrillers featuring older, right-wing cop protagonists. Actually The Wasters is about the My Lai massacre, but in that regard it’s similar to another standalone Crawford later wrote for Engel, this time under his own name: Gunship Commander (Pinnacle, 1973). It appears, judging from the blurb in The Wasters, that the “Now Books” were intended to capitalize on the affairs of the day, to seem so timely that they were hot off the presses, as it were.

This is clearly indicated by the plots of The Cop-Killers and The Dynamite Freaks, both of which concern left-wing hippie terrorists sticking it to the Man. But given that Crawford was the ghostwriter chosen for the job, it’s a safe bet we won’t get a peek into the minds of these terrorists, to see what makes them tick. As ever, Crawford’s “hero” is a hardcore cop who is such a bastard even his fellow cops despise him. He’s also part of an older mindset, and doesn’t cotton much to all this progressive liberal bullshit that’s soiling society as we know it. As for the hippie terrorists, they’re heroin-addicted bloodthirsty freaks who make Antifa look like the Hare Krishnas.

We already know our protagonist, Lt. Warren “Web” Burnell, is in for a hellish time when we meet him; the novel opens with Burnell nude, shackled, maimed and beaten, the punching bag of a muscle-bound sadist named Clacker. All we know is Burnell’s gotten into this predicament because he was taking things “personally.” At length we’ll learn that Burnell, a Korean War vet, is the chief (and sole officer) of his city’s Intelligence Unit, and he alone suspected that this rash of cop-killings around the country was part of a plot. His bullheaded research has led him here, captured by the very people he has been seeking.

Curiously, Crawford never tells us where all this takes place – he just keeps referring to it as “the city.” It’s clear it’s near the Mexico border, so one can assume it’s in New Mexico, familiar Crawford stomping grounds, as demonstrated by Stryker. But we know the city is large enough that it requires it’s own police intelligence unit, and Burnell, we learn via the usual Crawford arbitrary-backstorying, has been placed in charge of it because his fellow cops hate his guts and they want him out of their hair. Why? Because Burnell bucks authority and resents the spineless twits who run the police department, all of whom are more concerned with politics than protecting the people.

And speaking of which, Crawford displays all his strengths and weaknesses throughout the text; any character, no matter how minor, is given inordinate setup and background material, and the background stuff is almost brazenly shoehorned in with absolutely no regard for narrative flow. Different characters are given similar names: Bennie, Berny, Burnell. We’re “treated” to abritrary “cop world” details, usually relayed via overlong flashbacks to cases Burnell worked on in the past. But then flashes of ultra-sadistic violence will come out of nowhere, with at one point even a character’s eyeball getting knocked out by a chain and dangling there by threads of muscle. Not to mention Crawford’s strange focus on characters shitting themselves – at least a few of them, including Burnell himself, soil their drawers before the book ends.

But as I’ve mentioned before, what makes all this sadistic shit so strange is that Crawford is unwilling to use the word “fuck.” To me this is actually creepier than anything, and perhaps an indication of this guy’s strange personality…I mean, he’ll use racial slurs (brace yourself for the dreaded N-word), feature scenes of rape and torture, and have characters shit themselves, but he writes “F –” instead of “fuck” every single time. It’s just bizarre. I mean why draw the line there? And for that matter, there’s no sex, also as usual for Crawford, other than that rape bit, which is part of another of those overlong, arbitrary backstories; it’s his model girlfriend Robi who was the victim, one guy “in her” and the other burning her with a lit cigarette, and Burnell stomped the two to pieces, killing one in the process, and thus met Robi, who later became his on-again, off-again girlfriend.

Other than the flashback stuff, which ranges back over the years, the main plot of The Cop-Killers occurs over a few days. Cops are being massacred around the country, but “Jesus Edgar Hoover” of the FBI insists it is not a conspiracy. So too does the lily-livered chief of police in Burnell’s city, even after a couple of his own cops are shotgunned to gory pieces in an ambush. Burnell bucks authority and tracks down leads…but humorously, it’s all practically handed to him by Robi in some of the laziest plot-developing ever; basically, Burnell visits Robi and mocks her reading habits, and this ultimately leads him to the cop-killing terrorists!

Robi, hotstuff member of the jet-set, is a big fan of the “spy thrillers” of Millard McKinna, which sound awful but regardless are huge sellers – left-wing diatribes narrated by a spy for hire, with simple plots, capitalist villains, and “America is rotten” themes. McKinna is the pseudonym of Keith Ross, a liberal college professor (redundant term, I know) who lives, wouldn’t you believe it, right here in the city, and is so famous students fight to be in his classes. He lives in a secluded, gated and guarded community called Picana, and Robi was recently at one of his parties, hence the latest signed book on her shelves which sets Burnell off.

But Robi says maybe McKinna’s gone too far, as at this party a group of people were talking about the cop killings and they were all laughing and excited, and Robi’s certain McKinna and his crew, including a big guy named Clacker and a nuts-looking gal named Margo, are somehow involved with the murders. Burnell decides to investigate the whole lot of them. We get another Crawford staple: the interrogation-torture, as Burnell captures and beats around a hapless punk named Berny who has taken up with the terrorists. But Burnell kind of pities the kid so this part doesn’t have the merciless brutality of similar scenes in Crawford’s oeuvre.

Unfortunately, McKinna doesn’t get much text time – he is as expected small and wimpy, and spreads his left-wing, anti-cop, “power to the people” invective from the safety of his heavily-guarded mansion. (Crawford understands that hpocrisy is always lost on these types – the book is certainly timely in that regard!) Rather, big brawler Clacker comes off as the main villain, though late in the game Crawford changes his mind and brings in psycho-babe Margo, who turns out to’ve pulled the shotgun trigger at a few of the massacres, so eager to kill cops that she’s willing to take out her own comrades if it means she’ll get a chance at killing Burnell.

The novel, which runs 160 pages, quickly builds toward the incident it opened on: a captured Burnell, naked and in chains, captive of Clacker and Margo, his “insides busted” from merciless beatdowns. His left ear in particular is cauliflowered beyond repair, and Clacker continues to beat on it, sending Burnell into shamelss crying, puking, and shitting fits. As Zwolf said, Crawford’s work is almost “scat-porn” in that someone’s always “evacuating” at some point in his novels. Then Margo comes in, shotgun at the ready and crazy eyes fixed on Burnell, and our hero tries to use their insane, drug-addled impulses against them.

There isn’t much action per se in The Cop-Killers; indeed, all of it’s in the final pages, which features as mentioned a chain to the eyeball, someone getting shotgunned in the arm, another person being forcibly OD’d, and another shotgun blast to the chest at point-blank range. But Crawford leaves too many threads dangling. McKinna never returns to the narrative, and we only learn via dialog that he and his comrades will eventually be killed by their own kind, thanks to the disinformation Burnell managed to plant in their terrorist network – and Burnell’s not going to do a damned thing to save any of them. In fact he displays his hardcore makeup in a memorable finale in which he basically gives the kiss of death to someone he trusted, someone he’s only just learned was part of the terrorist group.

Overall The Cop-Killers was a quick, mostly satisfactory read, but it just wasn’t any fun…and it only now occurs to me that this is true of all the Crawford books I’ve read. None of them have the fun, escapist nature I demand in my lurid pulp yarns. They’re brutal and sleazy, sure, but there’s just something too nasty about them. Or maybe it’s just the arbitrary backstory page-filling and sloppy plotting that sets me off. (Or maybe it’s just the disgusting cover?) But at least this time such stuff is toned down a bit, likely because this one’s a good 20-30 pages shorter than the others of his I’ve read – the lower Crawford’s word count, the better the novel.
Posted by Joe Kenney at 6:30 AM