Donovan’s Devils #1: The Assassination Is Set For July 4... 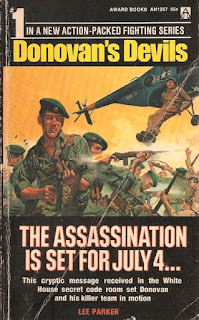 The cover blurb of this first volume of Donovan’s Devils proclaims it an “action-packed fighting series,” but folks don’t you believe it. Action is sparse, and the novel, a deceptively slim, slow-moving 160 pages, is more concerned with plot and character development, introducing too many characters – and detailing their backgrounds – for such a short book.

According to Hawk’s Author’s Pseudonyms, Donovan’s Devil’s was the work of Robert H. Turner. However Brad Mengel in his Serial Vigilantes credits an author named Larry Powell, who also wrote The Liquidator for Award. I suspect Brad is correct; I’ve never read Powell, and I’m no expert on Turner, but The Assassination Is Set For July 4 doesn’t read like anything I’ve read by him. There’s no spark to this one, and the novel seems to have been written by someone who wasn’t certain what exactly was expected of him. I mean folks I’m not kidding, the “action” doesn’t even start until page 119, when the unwieldy seven-man team choppers into Paraguay to prevent the titular assassination…and even then it’s a while until the fireworks get going.

Judging from this first book, one can see why Donovan’s Devils only lasted three volumes. Hopefully the next two volumes will be quicker-moving, because this first one does the heavy lifting of introducing the members of the team and putting them all together into a unit. But clearly I think there was some confusion about this whole project – the Devils, we gradually learn, all worked together a few years ago in ‘Nam, snatching a Chinese officer from VC forces…and this is the event depicted on the cover! Indeed Powell focuses so much on that ‘Nam mission in copious flashbacks that you wonder why he didn’t just make it the plot of the novel; as it is, the reader feels as if he’s missing some earlier installment.

The action opens in Paraguay, as local terrorist leader El Tigre captures the US ambassador, his expectedly-hot young daughter, and a doctor who unbeknownst to Tigre is actually up for the Nobel, and thus a valuable captive in his own right. El Tigre, accompanied by his former madam-turned terrorist sidekick Maria (who provides the novel’s few sex scenes), sends his demands to America. The President calls in old asskicker Brigadier General Brick Blaine, who oversaw that “impossible mission” in ‘Nam a few years ago in which he put together a group of Army misfits, some of whom were even in jail, and ran the aforementioned Chinese officer mission. So for whatever reason, the President wants this whole El Tigre thing to be handled the same way.

Blaine then calls in his personal asskicker – Captain Jim Donovan, who when we meet him is conjugating (rather non-explicitly) with his fiance. He’s about to get out of the service, but when Blaine’s call comes in Donovan can’t deny his purpose and tells his fiance so long. He and Blaine reconvene in Virginia and begin the laborious, page-consuming task of putting together their team of misfits, which is in no way, shape, or form to be confused with the Dirty Dozen, because there are only eight of them. They are, straight from the back cover: 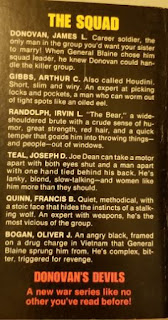 Humorously, there’s actually another member, one who didn’t make the “back cover cut:” PFC Nathan Carey, cowardly but arrogant, hated by the other men. In particular he and Irwin have a heated rivalry. But this dude has zero skills, other than being able to mimic other voices(!). Why he was included is anyone’s guess, but so far as the plot goes he volunteers for the mission, as he figures whoever saves the captives will become famous. But as you can see, there’s nothing special that unites these guys, and none of their specialties actually factor into the plot, which I’d say is more evidence that Powell really had no idea how to write this book. My assumption is the publisher came up with the series title and perhaps even the character names and specialities, and then hired the wrong ghostwriter to tackle it.

There’s no training involved, as all members are on active duty, so at least that’s one part of the cliché Powell doesn’t dole out; instead, it’s almost casual – the team is introduced one by one, we get somewhat-egregious rundowns on their histories, they’re put together at a base in Virginia, and Blaine and Donovan brief them. The final quarter is where all the action occurs; they chopper into Paraguay and hump it through the thick jungle to the old plantation El Tigre uses for his base. Three of the Devils get injured right off the bat, ambushed at the landing zone by El Tigre’s men. There’s also a crocodile attack as they make their laborious way through the jungle.

The climactic firefight is a bit tepid, unfortunately; Powell isn’t much for violence. This is very much a “get shot and fall down” kind of book, with none of the outrageous gore I demand in my violent pulp fiction. Donovan becomes so concerned with rescuing an undercover agent (a hastily-introduced eleventh hour subplot) that the rescue of the three “main” captives is almost perfunctory, as is the sendoff for El Tigre. But the mission is a success, and the President deems that “Donovan’s Devils” will be needed for more missions – little does he realize that there will only be two more.

And here’s Zwolf’s review.
Posted by Joe Kenney at 6:30 AM