A Study of Action-Adventure Fiction: The Executioner and Mack Bolan 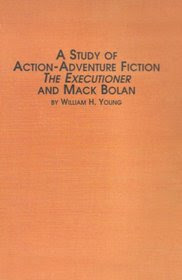 Who would've thought that a scholarly tome was published about the Executioner series?? Well, one was, and it's one hell of a weighty tome, packed with detail and insight. The author, William H. Young, is a literature professor who has taken it upon himself to document the series, and while it's interesting to read one man's thoughts on the novels, the cost of the book is prohibitive. I got it via InterLibrary Loan, and I suggest you do the same.

The majority of the book is Young's summary of every installment in the Executioner series from #1 up to the final volume published in 1991, including the SuperBolans and Stony Mans. (Able Team and Phoenx Force are not covered.) This same information is of course available on mackbolan.com, in the reviews section; only there you get the perspectives of several reviewers rather than one man. And given that Young is a professor, you get more of a scholarly view here -- however not as much as I would've liked. Instead Young relays the plot of each volume and comments on the author's skill, how each ghostwriter's version of Bolan differs from Pendleton's (he vastly prefers Pendleton's work to the ghostwriters), and he also takes time to point out troublesome entries in the series (he very much dislikes the work of Dan Schmidt, E. Richard Churchill, and Peter Leslie; there are others he roasts but these are his least favorite).

What's odd is that Young often relents that so many latter entries in the series are "gory," as if he has no idea the genre he is reading. He even comments on the "regrettable violence" of some of Pendleton's originals, and shows much disgust with the scenes with the "turkey doctors." This book, published in 1996, bears all the hallmarks of the then-current Politically Correct scene, with Young apparently wishing for a "kinder, gentler" Executioner, and he also goes on about various "racist" bits he encounters...again not realizing that this exploitative, over-the-top nature is part of the genre's charm.

He ranks Mike Newton as the best of the ghostwriters -- further, he ranks Newton's Prairie Fire as the best Executioner novel ever, even better than Pendleton's originals. I have this volume but haven't yet read it.

The biggest draw to the book is the behind-the-scenes stuff, which admittedly isn't much. Young wrote this in the pre-Internet world and so didn't have access to as much info as we do now. (Ie, he has no idea who 16th-volume author "Jim Peterson" was, when a simple Google search today will tell you it was William Crawford.) Young instead gains insight from interviews with various authors, conducted by mail, which are published at the end of the book: from 1986 he has interviews with Don Pendleton, Mike Newton, and Chet Cunningham. Of the three, Cunningham proves himself the funniest, sort of poking fun at Pendleton's original books. Then from 1990 Young has another mail-conducted interview, this time with Mel Odom.

It's a bit frustrating in there's no rapport in the interviews; each interviewee was given the same set of questions to answer. We do however get a little information about the troubles Pendleton had with Gold Eagle, including a lawsuit in 1986. In fact twice he almost lost the rights to the series, first with Pinnacle (which resulted in the Jim Peterson-written Sicilian Slaughter, which Pendleton admits here to never having read), then with Gold Eagle, which increasingly distanced itself from Pendleton and his advice on the direction the series should take.

In summary, about 400 pages are given over to Young's rundown/commentary on the entire series up to 1991. Then we have a section on the Pinnacle cover art, where, believe it or not, Young comments on every single cover, explaining what they look like. This is followed by another chapter where he does the same thing for the Gold Eagle books! These two sections will be a trying read for most.

We also have another short section where Young looks at the Executioner's "competitors;" ie other men's adventure series. But this is a woefully short list; he is unaware even of the Sharpshooter series -- however he does list the Marksman series, commenting that it is only for "the very sick." (Honestly, Young comes off like a total wimp in this book.) And again he demonstrates his lack of research; in the entry for the Penetrator , Young states that he only knows that Chet Cunningham was one of the authors for that series, and he has no idea who the other author was. But all a person has to do is open up any odd-numbered entry in the Penetrator series, look at the copyright page, and there find "Special acknowledgement is given to Mark K. Roberts."

Anyway, I wouldn't recommend this one as a purchase; I'd say get it via InterLibrary Loan like I did. However if you do buy it, it might prove valuable in the long run, as something you can often check back to for various (but scant) behind-the-scenes info.
Posted by Joe Kenney at 6:30 AM

I never ceases to astonish me how ripe paperback fiction is for academics. But I suppose it's to be expected. How many papers on the Bronte sisters can the ivory tower endure?

A lot of those academics are just winging it and trying to justify the reading material of their teenage years, when they were reading pulp and should have been reading Proust. I should know, I almost became one and I'd probably have written a dissertation on Tor and Dell/Abyss paperbacks...

Heh... I love academics. I've got two degrees in English and still feel no need to read my pulp-action novels with an extended pinky, looking for animal imagery or what-not. Complaining about violence in The Executioner?! What was he reading it for? Sounds like he'd rather Bolan be known as "The Reprimander" and send sternly-worded letters to the Mafia. :)

Still, sounds like it'd be an interesting read, just to see how someone would try to approach those books as "literature." But then I'd also kind of like to see some of my old professors who taught Jane Austen novels try to analyze a Harlequin romance...

Really pretty interesting, that someone did an analysis of all those books. But the fact that he's dismayed by the amount of violence is pretty hilarious. I think it comes back to the old contradiction that it's fine to shoot people with machineguns and such on television or in the movies, but heaven forbid the actor does anything but clutch his chest and spin as he falls to the ground. A .44 magnum through the skull is pretty much going to evacuate most of said skull all over the nearest surface in an explosive fashion - to not acknowledge that now and then is just being a milquetoast.