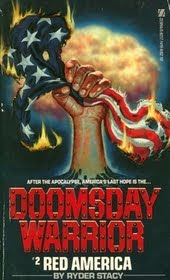 This time out Ted Rockson, the Doomsday Warrior himself, must once again venture into the post-nuke wasteland of America to destroy a Soviet-operated fortress in which Americans are being brainwashed into Red soldiers. Honestly though, the novel, at least the majority of it, is a retread of Doomsday Warrior #1. It follows the same template as that previous volume, with scheming between KGB nutcase Col. Killov and American Premier Vassily for control of all Soviet forces, while Rockson meanwhile tests himself against the mutated flora and fauna of "the world of 2089 A.D." (I lost track of how many times that phrase was repeated in the novel.)

Pavlov City is the name of the place where sturdy American slaves are deprogrammed by the Soviet mind devices, turning them into hardcore warriors for the Red Army (as it's called throughout the book). As soon as Rockson finds this out (somehow, it's never explained), he takes up his "Liberator rifle" and "shotgun pistol," hops on his trusty hybrid animal, and leaves the relative utopia of Century City -- that is, after some purple-prosed sex with his Amazonian galpal Rhona. Here follows a stretch of survivalist fiction which again seems lifted from the previous book.

Rockson sneaks into Pavlov City but of course is promptly captured; while in prison he finds himself in the cell beside a gorgeous 18 year-old American girl named Kim who reveals that the next morning the Reds will take advantage of her before killing her. Given that she is a virgin, and also that fate has placed her in this cell beside "the Ultimate American," she begs Rockson to take her. And not only is she a blonde, she's a gymnast to boot, maneuvering herself around the cage for Rockson's benefit. Rockson falls instantly in love with the girl. Really, who could blame him?

Finally we have a big battle sequence as Rockson, through blind luck more than skill, breaks free and pulls a Die Hard on the Reds in their very fortress. He frees the Americans, arms them, and engages in a battle with the Russians, who nevertheless manage to trap Rockson and his army on the top floors. Just when it looks like the end, deus ex machina intervenes in the worst way, as Rockson's pals show up in a commandeered helicopter, blasting away Reds with their newfangled particle beam weapon (a gift from the mutated Technicians of volume #1).

After all of this, Red America gets pretty good. Once again it seems obvious that the two authors who comprised "Ryder Stacy" shared the writing duties. One of them focused on the battle sequences and the stuff with Killov, all of which comes off like a more violent version of the '80s Rambo cartoon (remember that??). These sequences suffer from piss-poor writing, with horrendous dialog and unforgiveable POV-jumping (the worst case being one paragraph that starts from Rockson's point of view but ends in Killov's!).

However the other author is very good, and excels in the more far-out stuff. In the previous novel, this author delivered the Technicians material, which was above and beyond the rest of the book. Here he improves on even that, with a crazed sequence involving a group of "Indians" who drive around the desert on choppers, speak in Beatnik slang, and worship a guru called The Ginsberg. All of this is well outside of the men's adventure norm, and all the better for it.

In this section we have meditation trips, more sex between Rockson and Kim (which veers stright out into astral-tinged purple prose), a ribald party in which the beer is spiked with psychedelic mushrooms, and a climax which is lifted from Beowulf (at least that's my take, as it starts with Rockson at the beer-hall, then has him fighting against a powerful creature and its dragon-like familiar). It is by far the best part of the novel, and makes one look forward to continue with the series, just to see how much more out-there this version of "Ryder Stacy" can get.

And again, the series spoofs the genre, with Rockson the "Ultimate American" no more than a monstrous freak who spouts patriotic, anti-Communist invective that Ronald Reagan would've been proud of. But the irony is that Rockson and his pals live in a utopia that is 100% communist, where all the people must serve the cause, sharing allotted duties, living together in complete communion. None of this is stated outright, of course, which only adds to the impression that it's all a subtle in-joke from the authors.

In a way this series kept alive the feel of the men's adventure novels of the '70s, with a self-mocking tone, twisted plots, and a lurid vibe -- there are at least three sex scenes in Red America, and they're all pretty hilarious. I just wonder if our authors can keep it up (so to speak) for another 17 volumes.
Posted by Joe Kenney at 6:30 AM

The 80's were good for the men's action novel. I lived near an air base in 1991 and was astonished at the amount of gun toting series novels you could find at the local paperback shops.

I used to love the Doomsday Warrior. Got me through many study halls in high school... even though I remember them being pretty boneheaded even then. I was a gun-junkie at the time and some things used to irritate me, like how Rockson's shotgun had special loads that would fire in an X-pattern. There's no such thing and I was offended! :) Other than that, great brainless fun. I've heard that the audio book versions of these things (yep, they exist!) are hilarious.

Thanks for a great blog, and yeah, I really recommend the GraphicAudio-versions of the books.

Preview and stuff from the first book here: