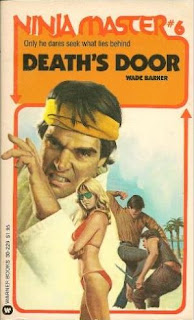 Ric Meyers is back with another Ninja Master that pushes all the sicko sleaze buttons – honest to god, Death’s Door features some of the most outrageously twisted stuff I’ve ever read in a men’s adventure novel, which is really saying something. But in this slim novel you’ll read horrific sequences of teenage boys being chopped up on butcher blocks (as well as chainsawed), their girlfriends skewered on pot racks and raped (as well as chainsawed), and entire families being slaughtered. Hell, even little kids are killed!

It’s my understanding that this was the first volume Meyers got to conceive and write on his own, his previous volumes having been catered to plots begun by another author(s) and already-commissioned cover artwork. But man, if Death’s Door is any indication, Meyers has one twisted imagination. The book seems to be inspired by the era’s fascination with slasher movies, only everything is taken to an absurd degree of sick insanity. I’ve read a bunch of these books by now, so I thought I was pretty desensitized, but as I read the nightmarish opening sequence I was like, “Please god, let it end!”

But we read as a pretty teen girl, her friend, and their boyfriends come back to her parent’s home after seeing the latest slasher horror movie. They walk into a horror movie of their own when three sadists swoop out of the shadows and begin torturing and mutilating them. One wears an old man mask, another has his face painted white and black, and the third is fat and wears a leather mask. Gradually, as her friends are being butchered in super-graphic detail, the teen girl realizes that all this seems familiar; the sadists are in fact recreating certain scenes from The Texas Chainsaw Massacre, up to and including a chainsaw. Only, the girl discovers as this grisly opening scene finally ends, the trio plan to “change the ending” for their recreation – the girl will not escape, as in the film.

We finally meet up with Brett “Ninja Master” Wallace, who is keeping abreast of these horrific massacres occuring here in Southern California – the girl and her friends weren’t the only victims; her mom and dad were also slaughtered that night. Later there will be another killing courtesy the three sadists, again going on and on and raising hackles; in this one they also kill two young boys as they watch a horror movie on television in their bedroom, even hanging their corpses in garish displays for the teenaged babysitter to discover, before her own gory end. I mean good grief, forget about the desensitization I thought I’d achieved – I was about ready to email Dr. Phil!

Meyers clearly makes his villains as horrible as can be so that we readers can feel the rush when Brett Wallace ultimately takes care of them; Meyers has done the same thing in each of the two previous books he’s read, only a helluva lot more so this time around. And also Meyers is unique among these men’s adventure authors in that he doesn’t shirk on the villain’s payoff; Brett usually goes to great pains to ensure the villains suffer mightily before he finally sends them to hell. But at the same time, I wasn’t sure Meyers really had to go that far – I mean, you don’t have to see Doctor No murder a bunch of kids to feel satisfaction when James Bond kills him.

Anyway Brett is on the scene, as ever perfecting his “no man” aura. Brett has also mastered the vibes he gives off, so that whatever he pretends to be, the person he is speaking to will presume that’s what he is. In other words, if Brett gives off “cop” vibes and talks to a real cop, the cop will just assume he’s speaking to a fellow officer who happens to be off-duty or somesuch. So here Brett is in a diner, mulling over these nightmarish atrocities, when in walks Lynn McDonald, a good-looking babe Brett apparently had a brief fling with sometime between volume 1 and volume 2. Brett’s just agreed to see her again for dinner when a group of psychos break into the place and start coming after her.

Meyers also reinforces the concept that Brett Wallace is a modern superhero, one with a “half-secret identity;” twice Brett makes comparisons to Batman, even reflecting that he has his own high-tech “Batcave” beneath the Asian restaurant he co-owns with his girlfriend Rhea. So here, as the psychos attack, Brett must stop them while not demonstrating his near-superhuman abilities to any of the witnesses. This is one of those fun action scenes Meyers does so well, with Brett using everything from dinner plates to barstools to take out the psychos, who prove to be suicidal in their vain, desperate attempt to kill Lynn.

The reader thinks Lynn’s going to be the novel’s heroine, but she’s off-page for the duration; shortly after this she is abducted from her apartment, carted off by an old woman and her young son, both of whom also seem violently insane. Brett ends up killing both of them in another novel action sequence, one which again sees the would-be assassins turn suicidal when they too fail in their goal. However Lynn is hurt in the action, knocked out, and spends the rest of the novel comatose in the hospital. Brett will save her life again and again as more would-be assassins come for her.

Indeed, one of these would-be assassins turns out to be a sexy nurse named Claire, and her sequences lend the novel a similar vibe to that of Murder Ward, which is interesting given that Meyers himself turned in a few Destroyer installments. But then Meyers’s Ninja Master practically is The Destroyer, only with better action scenes, more sex and gore, and none of the annoying genre-mockery. (I also enjoy it a whole helluva lot more.) But anyway Brett, superhuman as ever and invisible in his ninja costume, prevents Claire’s attempts at putting Lynn to sleep forever and then corners Claire in a closet, slicing away her nurse uniform shred by shred until she’s mostly nude.

From Claire Brett learns of Dr. Shenkman, who runs the government-funded insane asylum The Sanctuary. The Murder Ward similarities continue as Brett gradually learns that Shenkman might be behind these crazy murders. There’s also a link to a company, which the fathers of the two massacred families worked for. Claire turns out to be the closest thing to a lead female character, and she also turns out to be the novel’s female villain – every Meyers installment has had one – sent to Brett one night to seduce him, but really acting as a diversion for some thugs who show up to kill him. We get more Remo Williams-esque stuff as Brett uses his masterful technique to reduce Claire into a quivering wreck of ecstasy, but the Ninja Master himself is interrupted while taking his share of the pleasure, as the thugs break in at that moment.

None of these thugs prove much of a match for Brett, of course. As for the three main psychos, turns out they do in fact work for Shenkman, but have been doing jobs for the CEO of that big company; Shenkman provides psycho-assassins for mercenary work, and the fathers in the two massacred families, as well as Lynn McDonald, somehow got wind of the plan and had to be taken out. But the three psychos are just demanding more pay from the CEO when Brett sweeps into the room, decked out in his ninja suit and bearing all his ninja gear, and starts slicing and dicing.

As mentioned Meyers usually doesn’t cheat us when it comes to villain comeuppance, but again it must be stated that these three don’t suffer nearly enough for the awful things they’ve done. In a running sequence Brett doles out his typically-brutal punishment, from a plain old sword through the head to one dude getting a “steel enema” and then his dick chopped in half. The fat psycho manages to escape, leading to another slasher flick tribute where he runs to a camp filled with sleeping kids and takes them hostage, giving in to his lurid impulses with the busty teen chaperone. Meanwhile Brett slips in and takes care of the bastard; Meyers has a great knack for having Brett magically appear, pull of some superhuman feat, and then backtrack to quickly explain to us how he managed to pull it all off.

This kill is particularly inventive – Brett appears to enjoy trying out new techniques on his victims – with the Ninja Master slicing a square through the fat dude’s chest and then punching it out, heart, guts, and all. The finale continues with the gory vibe and retains the “Brett vs an army” climax of Meyers’s previous books. Brett heads back to the Sanctuary and takes on the legions of psycho-assassins, to the point that he’s “ankle deep in gore and guts.” However this sequence is more quickly-relayed than previous finales, likely because Meyers at this point is past his word count, Death’s Door being slightly longer than previous installments.

The Ninja Master also isn’t one to screw over, even if you happen to be a sexy woman, as duplicitous Nurse Claire discovers; after Claire tries to kill him with a syringe injection, Brett overcomes the fatal dose with some ninja internal magic and then hunts her down in the burning ruins of the Sanctuary. And that’s that – Shenkman’s plot is foiled and Brett’s secret identity is safe, but meanwhile poor Lynn McDonald has finally woken up and it turns out she’s now practically a vegetable.

Meyers’s writing is as ever good, with lots of forward momentum and as mentioned copious gore, but he is a rampant POV-hopper, and he neglects to use the same names for his characters in the narrative, which causes confusion. For example characters are referred to by first and last names throughout in the narrative, which jars the reader, in particular when it comes to the female characters. When you read “McDonald was still in the hospital” or somesuch, after a pause you’re like, “Oh – he means Lynn!” Meyers does this for Brett as well, randomly referring to him as “Brett,” “Wallace,” or “Ninja Master” throughout. I mean it’s fine for the characters to use multiple names for each other, but the narrative should be consistent.

But it’s only these pedantic little things that annoy; otherwise Death’s Door is a lot of fun, with the caveat that some of it will certainly raise your hackles.
Posted by Joe Kenney at 6:30 AM

This was the 1st Ninja Master I read, and I got a kick out of how crazy it was. And he looks like Ricky "the Dragon" Steamboat on the cover.

"She also turns our to be the novel's female villain (every Brett installment has had one)."

Obviously this series seems to go right with my tastes in "Men's Adventure" stories. I'd never have guessed it, since for me (like a lot of people, I guess) the word "ninja" conjures up images of characters fighting and almost literally nothing else.
But I especially like it when there's a "steamy" scene between the hero and the villainess, like the one you describe. And when the big showdown scene is between her and the male protagonist, which you also mention. (I know they're a cherished thing in adventure stories, but I almost never go in for those "cat fight" scenes between between the female villain and the female HERO.)