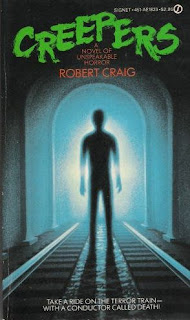 Another of those horror paperbacks that promises so much but delivers so little thanks to way too much padding, Creepers is apparently considered an early example of what came to be known as splatterpunk, ie horror with heaping helpings of gore. But bear in mind that while the book does occasionally get gory, it is for the most part a slow-moving procedural until the final several pages of graphic violence.

Coming in at 248 pages of small, dense print, Creepers is more of a thriller with occasional horror overtones. Robert Craig is a good writer, though it must be stated he’s guilty of POV hopping, starting off a scene in one character’s perspective and then abruptly jumping into another’s with no warning. He also, as mentioned, pads the pages a bit too much; Creepers, regrettably, is one of those novels where, after a hundred and so pages of not much happening, the action-packed finale is rendered in summary. In summary!!

Anyway, the novel takes place in grungy New York; despite the ’82 publication date this is still a ‘70s novel in spirit. Our hero, for the most part, is a maverick New York Transit Authority police detective named Frank Corelli. As described, Correlli is practically Tom Selleck – tall, muscular, black hair, black moustache, real popular with the ladies. In his thirties, Corelli lives for his job now, given that his fiance was murdered in a mugging six years earlier. When we meet him Corelli has no knowledge of the legendary “creepers” which are rumored to live in the bowels of the New York subway system.

Those expecting a tough cop yarn will be upset; while he definitely has all the makings of a horror novel version of Dirty Harry, Corelli doesn’t do much. The character who actually takes on the brunt of the action is a young black man named Willie Hoyt, who from his Harlem apartment runs Cerebrus, aka “The Dogs of Hell,” an army of unpaid, unofficial subway guardians. Given the increasing violence and crime in the subways, Willie’s army provides passengers with an extra level of protection, in which regard they’re constantly running afoul of the Transit Authority.

The novel occurs over the Labor Day weekend, and Craig opens it with one of the novel’s few horror sequences. Here we see the titular creepers in action as they snatch a lone woman off a deserted subway platform. Be advised that Creepers is another of those horror novels that tires the reader with inordinate backstory for one-off characters. This scene is the first indication of this, as we have to read pages and pages about this woman’s sob story of a life. It’s like this throughout, and just one of the things that adds to the reader’s frustration so far as the hurried finale goes. I mean, maybe Craig could’ve skipped this stuff and given us a more exciting climax, but I digress.

Another major character is introduced here: pretty brunette Louise Hill, whose young daughter Lisa is the next creeper victim, snatched away when Louise isn’t looking. In most fiction this would make for a traumatized parent, but throughout the book Louise, a single mother, will eventually hook up with Corelli, have sex with him(!), and then finally remember she should be looking for her lost little girl in the final pages – that is, well after she’s learned that the “things” that kidnapped little Lisa are cannibalistic mutants!

Corelli, who reads about these mysterious disappearances, decides to research the case off the book. This gets him into trouble with his “stupid chief” boss, Captain Dolchik, whom Corelli will slowly realize is hiding something. Meanwhile more people are taken by the creepers, including one of Willie Hoyt’s men. In each instance Craig spends an inordinate amount of time on backstory for these one-off characters, with the creepers themselves making brief appearances. They are for all intents and purposes zombies, described as having “dead white transluscent skin,” lank hair, and crazed bloodshot eyes, as well as inch-long claws instead of fingernails.

The splatterpunk stuff develops midway through when Hoyt, spelunking in the subway tunnels, finds his dead comrade. His face has been surgically removed, his shoulder and bicep muscles cut off, and most horrifically of all his testicles have been bitten off. There comes more overly-drawn-out material where Corelli, still on his own, finds that all creeper victims seem to be sent to Mercy Hospital in Manhattan, which itself appears to have some shady connection with the government. Eventually he’ll discover that Capt. Dolchik is well aware of the creeper plight, and is keeping a lid on it, working with the corrupt mayor.

This leads to Corelli being on the run from mysterious men in black cars; eventually he’ll have Louise being chased by them, too, with both of them having to hide out in a safehouse in Greenwich Village. Meanwhile the two have become an item, Corelli seeing something in sexy young Louise that makes him feel like finally moving on after his murdered fiance. Craig doesn’t dwell on the sleaze in the eventual sex scene, sticking to more haughty stuff like, “Corelli’s lovemaking was almost brutal, but Louise’s response matched his fervor.” We also get periodic mentions of Louise’s “voluptuous breasts,” as Corelli usually takes long ganders at them everytime Louise speaks.

Meanwhile the creepers continue to dine on subway passengers; in one extended scene they attack a train as it sits between stations, ripping the occupants apart. Another gory scene has them feasting on graffitti artists. A survivor of this latter attack is sent to Mercy with the story that he’d been attacked by “rabid dogs;” seeing that the man’s under police guard, Corelli continues his research, which entails another overlong bit where he researches the microfiche archives in the New York Library, going through newspapers back to the early twentieth century, when the subway station was first opened in New York. Here he learns that the creepers first came into the news in 1911, when the leader of them, presented in the story as a “vagrant,” ran afoul of the cops for mugging subway passengers.

Corelli theorizes that the modern creepers are descendants of these original vagrants. Later he’ll learn it’s more horrific. The creepers of today are basically C.H.U.D.s, and pure zombie-style their bite can infect humans with “super-rabies,” which is government spook codespeak for becoming a full-on creeper yourself. Also the creepers are dying due to some genetic quirk, and thus are being pushed to propagate the species – hence, the government spooks theorize, the creepers will be real game to kidnap young women for breeding purposes. Corelli, vowing to destroy the creepers, teams up with Willie Hoyt and his Dogs of Hell, planning to run a gauntlet of the subway tunnels. Louise around this time finally realizes she should be out looking for her kid.

The novel moves to a promising finale as we learn that the mayor and Captain Dolchik are also planning a secret ambush of the subway tunnels that very night, with a platoon of flamethrower and machine gun-wielding National Guard troops sent in. Here’s where Craig drops the ball. Louise, having gone off on her own, is saved by Corelli, who himself is knocked out by the creepers. They’re both tied up in the veritable headquarters of the creatures, which is an abandoned station between the 96th and 86th street stations. Oh, and little Lisa is there, too – turns out she’s been unconscious since she was abducted a few days ago.

It’s up to Willie Hoyt to save the day, taking on several creepers with a hunting knife in a great sequence. And then our heroes…run away. That’s it, friends. There’s no point where studly Frank Corelli takes out his service revolver and mows down hordes of the creatures. Instead the trio, carrying the still-unconscious Lisa, race for safety while the National Guard moves through the subway system, the soldiers under orders to kill anything not wearing a uniform. Corelli himself is anticlimactically removed from the narrative, off to Mercy to be with Louise and Lisa.

And here’s the ass-kicker. The creepers, driven above ground due to the pincer movement of the National Guard, burst into Times Square and go into a feeding frenzy. And Craig writes all of the ensuing carnage and action in summary. I couldn’t believe it! So many, many pages of nothing happening and here, in the climax, when the shit finally hits the fan, Craig informs us after the fact of “a war” that went down between the National Guard and the creepers in Times Square, just outlining the eventual destruction and death toll. To say it’s an unfulfilling finale would be an understatement.

We’re informed that “hundreds” of creepers are dead in the aftermath, with nearly fifty human casualties. The scene at least starts off memorably, with a creeper loose in Grand Central Station, going for the soft flesh of a woman’s throat, which we’re informed is like sirloin for creepers. But after that it’s summarized action, with the final pages reading almost like a newspaper article. We then flash forward to that Christmas Eve, with Corelli and Louise now happily married and a fully-recovered Lisa accepting Frank as her new dad. Oh and meanwhile Willie Hoyt has become a creeper, having been bitten during the escape, and likely will propagate a new strain of them.

I really wanted to enjoy Creepers, and for the most part Craig’s writing and characterization are good, but there’s just too much missed opporuntiy in my opinion. I so wanted to read a gory rollercoaster of a finale with Corelli and the Dogs of Hell going down into the subway tunnels and extracting bloody payback from the cannibalistic bastards. Instead I read in shock as Corelli got knocked out, freed by someone else, and then ran away, leaving the payback to be delivered by a group of faceless, nameless National Guard troops – in summary, no less.

The several-page sequence with the subway-dwelling satanic mutants in John Shirley’s One-Man Army is better than the entirety of Creepers, so I’d suggest you check that out instead if you’re looking for some action-horror set in the New York subway tunnels.
Posted by Joe Kenney at 6:30 AM

Yah read this one back in the early 90s. Great stuff, loved the ending and yah the monsters are very much like CHUD, hey maybe the movie CHUD should have been like this one. Heck if I were to write a sequel to this one, I would set it in 2016 and write it ala the great GH FROST...Army of Devils all the way. haha.

question, have you ever found other books written by Robert Craig, cant seem to find any, I think this is his only novel.

Thanks for the comment, tetsuo -- Army of Devils meets Creepers sounds like a great idea! I'm not sure about Craig...there is another author of the same name who has published various non-fiction books; no idea if it's the same guy. There was also a Robert/Bob Craig who apparently wrote a book about climbing K2 and who passed away last year -- again, no idea if it's this same person.

yah too bad ...btw if you want another over the top horror recomend Shaun Hutson books esp. Erebus(vampires) and Assasin(mobsters vs. undead lots of bang bang. ).

@tetsuo: I know you asked this years ago, but in case anyone's still intersted Robert Craig also wrote a medical horror/thriller in 1984 called TRAUMA: https://www.goodreads.com/book/show/24820827-trauma Unfortunately there's not much info out there on this one.