The Eyes Of The Tiger (aka Nick Carter: Killmaster #9) 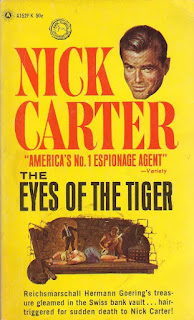 The Eyes Of The Tiger, by Nick Carter
September, 1965  Award Books

For his first volume of Nick Carter: Killmaster, Manning Lee Stokes turns in a slow-moving espionage story along the muted lines of his later Mission To Venice. The Eyes Of The Tiger was also the first book Stokes wrote for series producer Lyle Kenyon Engel, and initiated a writing partnership that would last between the two until Stokes’s death in January 1976.

Per Will Murray in his Killmaster article in The Armchair Detective (volume 15, number 4, 1982):

After [original author] Valerie Moolman dropped the series, Engel advertised in the New York Times for adventure writers. Award had found that Killmaster sold so well that at least six novels could be published per year. The ad was answered by an industrious and hard-drinking writer named Manning Lee Stokes. Stokes, who in the past had written a little of everything from porn novels to Classics Illustrated, had been inactive for a while and anxious for work. His first Nick, The Eyes Of The Tiger, was published in 1965. It introduced a more macho – almost brutal – Killmaster than the Moolman version had been. Over the next six years, Stokes churned out a total of eighteen Nicks, sometimes carrying the series solo for extended periods. He also wrote the first novels for other Engel series, including The Aquanauts, Richard Blade, and John Eagle Expeditor.

Stokes was not only amazingly prolific but could write solid fiction against tight deadlines. Even when he did not adhere exactly to the approved outline, usually the result was just what Engel needed. His was the first Nick to be written in the first person. This was 1969’s The Red Rays. It’s not clear how the first-person device was introduced into the series. As Stokes remembered it, it was his idea. He had used it in hardboiled mystery paperbacks in the ‘fifties and thought it lent itself to Nick Carter…Nevertheless, the first-person voice became standard with The Cobra Kill [another Stokes installment] in 1969. It became a bone of contention between Engel and Award for the rest of their association.

Inevitably, Manning Lee Stokes grew weary of Nick Carter and did other Engel projects – which he wrote right up to his death in the mid-‘seventies.

I love that description, “industrious and hard-drinking.” I included all of this because it’s practically all I’ve ever been able to find out about Manning Lee Stokes; it doesn’t appear that he ever gave any interviews, and Murray revealed in the uncut Engel interview (which appeared in Paperback Parade #2, 1986) that he himself had never met Stokes, only talked to people who knew him. In other words, Stokes is kind of a mystery, and I’d love to know more about him – he is mentioned in this very brief biography, where it’s revealed that he and his wife never had children.

But anyway, The Eyes Of The Tiger is where it all began, and the seeds for many later Stokes-Engel gems are planted here. In fact a throwaway mention of Nick’s brutal annual training at PURG, held in a “quasi-hell in the American Southwest,” is almost identical to the more fleshed-out sequence of John Eagle’s harsh training in the first Expeditor novel, Needles Of Death. But unfortunately, Stokes’s soon-to-be-customary digressive plotting is also here; it takes a damn long time for much of anything to happen. While the writing is strong, the thrills are few. However Stokes certainly has done his homework, so far as the main characters and situations go; one would have a hard time guessing this was in fact his first installment of the series.

Anyway, Nick’s in Zurich, posing alternately as a grungy sailor and a portly American businessman named Frank Manning – Stokes already employing his customary in-jokery within the first few pages of his first Killmaster novel. When we meet Nick he’s standing over the comatose form of a gorgeous, stacked blonde whom Nick has given a mickey finn; the woman made a play for him in his sailor guise, and a suspicious Nick took her back to his hovel of a hotel room…and promptly knocked her out! (Be prepared for the egregious usage of exclamation points that mars most of Stokes’s early Killmaster yarns, by the way.)

This will ultimately prove to be the Baroness Elspeth von Stadt, lovely West German secret agent who carries derringers in her garter belts and the photo of a hanged man’s face in her locket. Nick’s boss Hawk has sent the Baroness to meet up with Nick and join him on his latest assignment, which has him plotting to steal a tiger statuette with diamond eyes from a Swiss bank. Old Axis comrades Shikoku Hondo and Max Rader also plot to get the statue; Rader killed the Baroness’s father back during the war years (it’s her father’s face in that grisly locket photo), and the Baroness, who is consumed with vengeance so far as Rader goes, is the only person who knows what the old Nazi’s new face looks like.

So The Eyes Of The Tiger limps into action; it takes a good 40 or so pages of super-small and dense print to learn all this. The short bit of early action occurs when Nick finds Hondo about to rape the Baroness’s comatose form; Stokes here doles out hordes of racist stuff which is pretty unusual for him, referring to Hondo as everything from an “ape” to a “lustful little Nip” to even a “saffron-faced monkey.” Anyway Nick barges in, saves the Baroness’s honor, and then tosses Hondo out the window after savagely kicking him in the crotch. So much for Shikoku Hondo, promised on the back cover as one of the novel’s main villains.

While the book lacks much in the way of action until the final pages, The Eyes Of The Tiger is surprisingly more robust in the sexual hijnks, which is particularly interesting given the publication date. Stokes here is more explicit than he is in later volumes, with Nick and Elspeth’s initial boffing given an elaborate three-page sequence that, while never outright hardcore, leaves nothing to the imagination. More importantly, this sex scene prefigures every other sex scene Stokes wrote: it’s sexual mortal combat, man versus woman, Nick “mastering” the female, who of course has never had a real man and thus never had a proper orgasm. We also get the memorable detail of Elspeth “leeching at [Nick’s] manhood.”

As Will Murray states above, Stokes’s version of Nick Carter is certainly brutal at times; he ends up using Elspeth as bait, same as he will use other sexy sirens as bait in later Stokes novels. When she’s taken captive, Nick is contacted by Rader’s men and informed that Elspeth is in the bowels of a medieval castle, where she will be tortured if Nick doesn’t turn over the part of the key he stole from Shikoku Hondo, which Rader needs to open the Swiss vault with the tiger statue. Stokes delivers one of his effective scene-setting moments where Nick, stripped to swimming trunks, his face and skin blackened, infiltrates the castle during a heavy storm and plants his weapons in the torture chamber.

The finale also prefigures another mainstay of Stokes’s later fiction: the “bluff or brawn” gambit, where Nick, alone and unarmed, bluffs his way into Rader’s castle and tries to con the old Nazi sadist into giving up Elspeth and letting them both go. He fails, and Stokes delivers in the final pages the moment promised on the first-page preview: Elspeth is stripped and put on the rack, hot pokers about to be applied to her by Rader’s men. But Nick’s planted trusty Wilhelmina and Hugo beneath the rack, and Stokes doesn’t cheat us out of an action-packed finale.

In many ways, The Eyes Of The Tiger is like Stokes’s version of Casino Royale. Mostly in how Nick, like Bond in that first adventure, here begins to fall in love with a woman he’s uncertain he can trust – the Killmaster, you see, is shocked to discover he’s developed feelings for Elspeth, and wonders if he might want to quit the spy game. Admittedly this is some lame telegraphing, but Stokes handles it well, and of course it leads to the expected outcome – Elspeth is like Vesper Lynd in that she is hiding a few things from our hero. Her finale is also similar, with her proclamations of love falling on deaf ears; this leads to a nice bit, and another indication of the brutality of Stokes’s hero, where Nick leaves Elspeth “one last bullet” – for herself.

It moves a lot slower than its 159 pages would imply, but The Eyes Of The Tiger is still pretty enjoyable. One can imagine that Lyle Kenyon Engel was certainly happy that this particular writer responded to his ad. I’ve managed to pick up all of Stokes’s Killmaster installments and look forward to reading the rest of them.
Posted by Joe Kenney at 6:30 AM