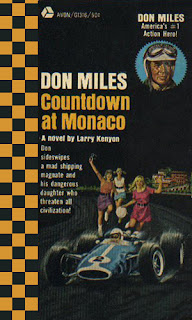 Countdown At Monaco, by Larry Kenyon
May, 1967  Avon Books

The Don Miles series returns with a second adventure that takes place one year after the first; Lew Louderback once again serves as “Larry Kenyon,” just as he would for the next two volumes in this brief series. And once again he turns in a complexly-plotted spy yarn that comes off as a helluva lot longer than its misleading 159 pages would imply, thanks to the small, dense print. But as ever Louderback’s writing is good (he remains locked in Don’s third-person perspective throughout, without a single instance of POV-hopping!), and he’s very much in-line with the high-caliber writing expected of book producer Lyle Kenyon Engel’s writing stable.

Don Miles does a little better for himself this time around, not coming off quite so much as the bumbling fool he was in the first volume. (That being said, he does manage to get captured at one point, has electrodes implanted in his brain, and is turned into a mind-controlled would-be assassin of his comrades.) We’re informed at the outset that Don has had no other missions since his first one in Le Mans; he is for the most part a sleeper agent, only activated when his latest race happens to be occurring in some area US Intelligence is interested in. Thus he is eventually contacted while in scenic Monaco, training for its upcoming Grand Prix.

As with the first book, the race itself doesn’t feature much in the novel (and we’re informed that Don did win Le Mans after the events of volume one, using his American-made Panther racer), with the majority of the action taking place in the days leading up to the big event. Louderback provides the racing stuff via training and heats Don competes in; to tell the truth I skimmed over this stuff, as it doesn’t have much appeal to me, all about performance engines and hugging the curves in sharp turns and Don feeling alive behind the wheel. I’m more interested in the spy stuff.

Louderback typically delivers complicated scenarios, and such is the case in Countdown At Monaco, though it’s nowhere as complex as the one in the previous book. Don isn’t even on assignment when the book opens, blissfully unaware he’s about to be activated by his still-unseen handler, who is back in the US. Don’s here in Monaco noticing how many of the residents seem so strange and sleepy, and he’s driving along the twisting roads on the everyday model of the Panther when some beautiful blonde engages him in a high-speed chase, a la your average James Bond novel.

This turns out to be Airadne Dexos, 20 year-old daughter of multibillionaire shipping magnate Apollo Dexos. Ariadne crashes her car and confesses to her rescuer Don that she’s a huge fan of his and engaged him in a race just to meet him. Posthaste they’re having sex at a nearby hotel. Louderback writes three sex scenes this volume and they follow the same template of the previous book, with copious detail of the women’s anatomy before cutting away from the action. But whereas last time Louderback would quickly fade to black via an ellipsis, this time he provides a bit more juicy detail before the inevitable three dots appear.

The novel touches on mind control, which is pretty cool given it’s early date – published even before the RFK assassination, which was a mind control job if ever there was one. A post-coital Don flips on Radio Monte Carlo, which is the hip “ye-ye girl” station here in Monaco, and as soon as the station’s signature “Domino” tune kicks in Ariadne turns into a veritable zombie and comes at Don with a knife. It gets weirder still when a trio of beautiful but zombie-eyed gals in swimsuits break in, hold Don at harpoon point, and steal Ari off; one of the girls even tries to kill Don by knocking him off a cliff. He survives and puzzles over this super-weird shit.

Shortly after this Don is activated; his race team mechanic/fellow secret agent Buck Garrett is sent in, speaking in the same painfully-rendered “Southern dialect” as the previous volume. The assignment hinges around missing uranium, Apollo Dexos, a Swiss psychiatrist named Dr. Hirn, and Dr. David Wollenberg, “the father of the A-bomb,” who has retired here to Monaco after a stroke years before. There’s also a plot that’s turning the residents of Monaco into half-asleep zombies; at length Don will discover that the tap water is poisoned with a chemical called BZ, and Don has remained unscathed because he “never drinks the stuff.”

The racing aspect of the series isn’t nearly as prevalent this time, and indeed comes off as a hindrance to the action. With the fate of the world in the balance, I could care less that Don has a big race coming up the day after next. Perhaps this is why Don Miles never achieved the success of Engel’s other 1960s spy series, Nick Carter: Killmaster. I don’t think the fault could be laid on Louderback, who keeps everything moving and introduces enough unusual concepts that Countdown At Monaco stands out from the countless other spy paperbacks of the era.

One thing missing though is action. Don goes unarmed for the majority of the text, and doesn’t even have any of the gadgets he used in the previous book. He’s chased several times by mind-controlled zombies, and shot at even more times, but it gets to be a little old how bad of a shot the ambushers are; it seems like Don dodges about a zillion bullets in the course of the book, usually by just rolling around and jumping. As for the other kind of action, in addition to Ariadne, Don also scores with the girl’s young stepmother, superhot superstar Danielle Corri, Bardot-esque latest wife of Apollo Dexos.

This score takes place on a nudist beach immediately after Don has ducked and dodged bullets courtesy the latest round of mind-controlled ambushers. Danielle is free of the mind control but lives in fear of Apollo, however she reveals that Ariadne herself is under control, something Don has already suspected. In the last pages we’ll learn a twisted family dynamic is behind all this, but at any rate Danielle is the closest thing to a heroine in the book, whereas Ariadne is in love with Don while at the same time under mind control by her father, who loves Ariadne in a non-fatherly way and thus resents Don.

Also, Don Miles works in more of an investigator capacity throughout, tracking leads and clues to find out what’s going on in Monaco. He puts together the mind control scheme, which is courtesy Dr. Hirn and has to do with electrodes placed in the brains of several subjects who are activated by a remote control center which broadcasts via computer through radio relays. In this way the novel has a sort of modern, almost sci-fi aspect; there’s even a part where Buck handles an IBM computer, much to Don’s amazement. It seems both outdated and modern at the same time; there aren’t too many other ‘60s or even ‘70s action series where the two-fisted heroes do research on a computer.

But this investigative stuff serves again to make Don Miles seem like a second-stringer in the world of Nick Carter. He’s constantly being jumped by ambushers and walking into traps, and as mentioned he’s captured late in the book. Louderback retains the locked third-person perspective even though our hero is under mind control, and it’s masterfully done, with a bit of a psychedelic edge. Don stumbles around in a confused fog, at Apollo’s beck and call, having become “a life-sized doll” for Ariadne – who goes into a rage when she discovers that Don can no longer “perform” for her, thanks to the mental blocks her dad has put on him. However those blocks don’t prevent Don from having sex with Danielle again…

When Don is sent via mind control to kill Buck, the Southerner saves Don’s ass with a jury-rigged scrambler device which sends out white noise or somesuch, thus cancelling out the mind control waves. We’re in the homestretch now, as a freed Don realizes that Apollo has all the uranium and plans to destroy the entire planet while he and Ariadne stay safely below the ocean in an aquatic home, to come out afterwards and repopulate the world together(!). Louderback, as last time, works in Don’s race car driver profession here, with Don doing the high-speed driving while Buck shoots at their pursuers. Even here in the finale we’re denied an ass-kicking title hero.

We’re also denied much of a send-off for the main villain; he’s piranha-bait after a quick tussle with Don aboard his massive personal ship. Countdown At Monaco climaxes with a long racing sequence as Don competes in the Monaco Grand Prix, just a few hours after brain surgery to remove those electrodes(!), and he still doesn’t know where the atom bomb is. Louderback successfully combines Don’s racing and spy halves as our hero discovers that two of his competitors are also mind-controlled Apollo dupes who have been preprogrammed to initiate the atomic countdown; Don has to take them out while making their crashes appear natural.

Overall Countdown At Monaco is a lot of fun, and definitely has that ‘60s spy-fy vibe, though I can’t say it’s one of the best such spy series out there – I still much prefer the ‘60s installments of Nick Carter: Killmaster and even Mark Hood. Louderback’s writing is skiled and fast-moving, but it must be stated that his plotting is so overly-complex that his finales are usually composed of some villain are other explaining everything in bald exposition. Anyway, Don Miles returned a few months later in Revenge At Indy.
Posted by Joe Kenney at 6:30 AM

As per usual, your review has resulted in another addition to my wishlist...

Great write-up. Thanks for sharing.