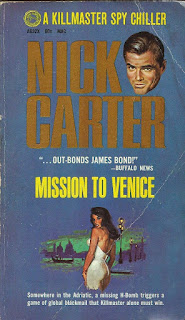 Manning Lee Stokes is in pure Ian Fleming mold in this installment of Nick Carter: Killmaster. While it still has Stokes’s usual literary flair, Mission To Venice lacks the more outlandish elements of his other installments, sticking to the “real world” for the most part. It also has some trace elements of Fleming’s From Russia With Love. But I definitely enjoyed it – mostly because, this early in, Stokes was clearly still enjoying the series, unlike later dialed-in deliveries, a la The Red Rays.

This one’s also a short 156 pages and moves throughout, proving again that the shorter the word count, the better Stokes was. There’s no action intro for Nick Carter; he’s on vacation in Paris with a young “sex machine” named Georgette when he’s called into AXE boss Hawk’s office in Washington and given the latest assignment. A US plane carrying an H-bomb has gone down somewhere over the Adriatic Sea, and the US figures the Yugoslavs have found it. Their goal will likely be to use it for leverage against the Italians in the long-running Yugo-Italian rivalry for control of Trieste.

Nick (as he’s referred to in these early volumes) is told his companion will be an “international courtesan” who was once an Italian princess but who now works as a part-time AXE agent; he is to meet her on the Orient Express, which is where the From Russia With Love feel comes in. (Nick’s also given a special briefcase courtesy Poindexter of AXE Special Effects & Editing, a suitcase much like the one Bond was given in that novel.) Hawk informs Nick that the man behind the Yugo plot is Vanni Manfrinto, head of Yugoslavian intelligence; Hawk makes it clear that he wants Manfrinto dead by mission’s end.

Manfrinto is a “satyr” with a “woman a day habit,” thus AXE is using the former princess as a “stalking horse” to lure in Manfrinto so Nick can spring the trap on him. The princess is Morgan de Verizone, a beautiful brunette with delicate features who in fact looks more like a princess than a whore – Nick, disguised as a travelling businessman from the midwest, can’t get over how beautiful she is as he secretly watches her onboard the Orient Express. For reasons Stokes muddles around, Nick doesn’t outright present himself to Morgan as her AXE contact, even though he’s supposed to; instead he just bides his time.

Not that this stops them from the expected sex; in a complete disregard for plot contrivance, Stokes has Morgan sitting beside Nick on the dining cart that evening and promptly presenting herself to him, just thinking he’s a good-looking dude and looking to pass the night in memorable fashion. The sex scene is vague and not as explicit as such material in later volumes. Whereas the typical guy might be a bit winded after all this, “Killmaster” instead allows himself to be captured by the two thugs who have been shadowing the princess. Once he’s learned they’re Yugoslavian agents, he kills them quite brutally – bashing their heads together.

When Nick and the princess get to Venice Stokes really goes for the Fleming vibe. It’s all fog-clouded, cobblestoned streets and men in suits lurking in doorways as Nick secretly follows Morgan around the city, eventually tailing her to The Lido, where it turns out Manfrinto has stationed himself, operating out of a closed-down casino. This is where the majority of the action takes place, particularly in one sequence where Nick scouts out the casino while Morgan’s “entertaining” Manfrinto. Nick, infiltrating the henchman-infested casino, takes the time to spy through the keyhole to Manfrinto’s bedroom, where he sees the man “going after [the princess] like an oestrual goat.”

Nick is eventually cornered, and after killing another man he has to escape, with the thugs closing in on him floor by floor. The suspense is ultimately runined with the deus ex machina presence of a long rope up in the attic, which conveniently enough goes all the way down to the ground, six floors below! There’s also a nice bit where Nick has to elude a “radar truck” that pursues him. All that accomplished, however, he gets shot in the leg the next day while again stalking the princess through the fog-bound streets, killing the Yugo agent who shot him.

Only here does Nick reveal to Morgan who he is, with one of the greatest dumb lines I’ve ever read: “Forget the theatrics. You’re a prostitute and I’m a secret agent!” One of these days I’m going to try to work that line into everyday conversation. Anyway this leads to the veritable climax, as Nick, for once not boffing the gal (who is limping due to being so worn out by that oestrual goat), instead again uses her as prey, sending her off to the casino that night to distract Manfrinto. Oh and by this point Morgan has told Nick she loves him and wants desperately to get out of the spy game and be with Nick forever and etc, in some of the lamest telegraphing ever.

The action stuff doesn’t really occur until the final quarter, and for the most part it’s briefly rendered. Manfrinto’s casino is near an “isle of the dead,” ie a cemetery-filled island which is being used as a forward base for the Yugo and Russian scuba divers who are searching this section of the Adriatic for the H-bomb plane. Nick sneaks onto the island, hiding in the muddy graves and whatnot, until he is “a mud-plastered statue of a latter-day Hercules,” who runs roughsod over the foreign agents. As ever Stokes’s version of Nick Carter is particularly cold, blowing up a bunch of scientists with a few grenades and then gunning down unarmed soldiers with a stolen tommy gun.

Stokes takes us into the homestretch with the expected development – Nick is captured, and easily, at that. It’s that damn attic rope again, which is still hanging outside the casino, and like a dumbass Nick decides to chance it and hefts himself up there, only of course to realize it’s a trap, after all. And, sure enough, the bastards also have Morgan, whom they’ve been torturing for fun. She’s bound and topless, and they have a grand old time jabbing lit cigarettes onto her abdomen and breasts.

In a twisted bit reminiscent of the even-more-twisted finale of Stokes’s The Golden Serpent, Manfrinto and his men have Nick strip and cajole him to get on top of the now-catatonic princess, and screw her for their viewing pleasure! Stokes doesn’t get as outrageous as in that earlier installment, but still it’s pretty crazy. And even though he’s “balls deep” (as a friend of mine in college always put it) and surrounded by armed goons, Nick still manages to grab away a tommy gun and start, uh, blasting. He even manages to capture Manfrinto, chasing him over to that muddy island of death and beating the shit out of him.

In the climax Stokes delivers a few reveals; for one, Manfrinto expected “someone else” to come for him, instead of Nick Carter. This turns out to be Hawk himself, who for once is here on the scene of action – Nick realizes with a sinking sensation that he himself has been used as the stalking horse, all along. Hawk and Manfrinto were best friends during the war, Hawk reveals, until Manfrinto went over to the Nazis and sold out their OSS team. Also here Stokes introduces the tidbit that Hawk’s full name is David Alexander Hawk, a name so seldom used that “Nick had almost forgotten it.”

The finale is the usual rush job of quick info that Manfrinto was tortured into revealing the whereabouts of the H-bomb, after which Hawk’s left orders for his death. And meanwhile the princess is nuts, but she’ll be taken care of in a sanitarium and given a new name and new life when she gets out. And that’s that – lots of Fleming suspense and atmosphere with occasional thrills and a too-quick action finale.

But Stokes is on form throughout, and as mentioned keeps the ball rolling. Interestingly, he mentions that Nick is “thirty-odd years old,” which is much younger than the World War II vet of the first volume. Stokes also occasionally delivers on the pulpish, perhaps-intentionally goofy stuff also expected of him; for example this time he writes “Killmaster” not only without the “the,” but in all caps, ie, “KILLMASTER ran down the corridor,” and the like. And while Stokes goes easy on the spy-fy gadgets this time, he does at one point have Nick wearing gloves made of skin flayed from the hands of executed criminals!
Posted by Joe Kenney at 6:30 AM

This was pretty great, particularly the last 40 pages or so. I'm sure there are clunkers out there, but I haven't read a bad Killmaster yet.