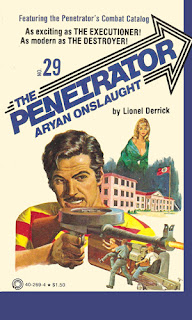 The Penetrator gets weird in a far-out volume by Mark Roberts, which, per the back cover, even leaves Mark Hardin’s “mind blown.” While Roberts doesn’t fully exploit the bonkers plotline he’s come up with, Aryan Onslaught is at least a lot more entertaining than the past several volumes have been, proving that, even this far in, there’s still some life left in the series.

Quickly picking up immediately after the events of the previous volume, we have Mark already on the scene in Coalville, Utah, during the middle of a blizzard. Roberts delivers an effective action opening as the Penetrator takes out a three-man machine gun emplacement outside the small town, burtally torturing the survivor with ice water on his privates to get information. The Aryan Brotherhood, composed of Nazi radicalized ex-cons, has taken over Coalville, under the leadership of Big Toby, a punk rock-listening neo-Nazi who claims Coalville is just the spearhead of a larger movement.

In a plotline that prefigures that of David Alexander’s Z-Comm #1, the “ABs,” as Roberts refers to them in the narrative, have staged a successful coup in Smalltown, USA, and no one even noticed. The populace acts like zombies, the TV station broadcasts AB propaganda, and the neo-Nazi punks run roughshod over their subjects. Eventually Mark will discover that the ABs have poisoned the water with the mind-altering drug datura and they’re using subliminal tricks to brainwash TV viewers – cue lots of anti-advertising invective courtesy Roberts. (We also get the memorable tidbit that the sound of rock music “disgusts” Mark Hardin.)

An interesting change has slowly been occurring in The Penetrator; it appears that the attempt is being made to make it more like The Executioner. In addition to the newfangled “Penetrator’s Combat Catalog” which appears at the back of each book, we also have changes to the Penetrator’s arsenal. In particular there is “the Brown Beast,” a Ford pickup with camper that is very clearly modeled after the Executioner’s War Wagon. Never mentioned before, the Brown Beast is suddenly revealed as a key component of the Penetrator’s endless war on crime.

Roberts also fills up pages with another new element: rampant gun-porn. While previous volumes have certainly had weapons details, Aryan Onslaught goes overboard with lots of technical data on the various firearms and explosives Mark uses – and not-so-coincidentally, each of them show up in illustrated form in this volume’s Combat Catalog. It would appear then that Pinnacle paved the way that Gold Eagle Books eventually went; as I recall, all those ‘80s GE books had gun info in the back, but the Penetrator books go a step further with a handful of pages instead of just one.

While scouting out the town Mark runs steps into a backyard, only to be confronted by a blonde woman of “Amazon” proportions who holds a shotgun on him, ready to blow away this latest Aryan Brother. This will turn out to be Angie Dillon, widowed mother of pubescent twins. A former New Orleans cop, Angie moved to Coalville ten years ago, and her husband died in a boating accident under mysterious circumstances. She and Mark will ultimately fall in love, and Roberts introduces this ungainly romance angle where Mark, within a few chapters of meeting Angie, has of course had the between-chapter sex with her but finds himself practicing karate with her kids, making meals with her, and wondering if he should move the Stronghold nearby so he can marry her!!

In what can only be an authorial slap to the face to fellow series writer Chet Cunningham, Roberts even has Mark realize that he’s not once thought of Joanna Tabler, his hotstuff girlfriend of previous books – and, pointedly, a creation of Cunningham’s. But Mark’s head over heels for Angie, even thinking of having kids with her. Roberts sprinkles this stuff around periodic outbursts of quickly-rendered action; Big Toby sends in a stream of hitmen who prove humorously ineffective against the Penetrator, from a carload of Syndicate hitmen to a professional assassin. In each case the Penetrator kills his hunters with the weaponry illustrated and described in the Combat Catalog.

The veteran action reader will figure out quickly where this is going. Big Toby, who himself is a dullard ex-con, has Angie’s twins kidnapped – to be executed on live local television as an example of what happens to all who go against the Aryan Brotherhood! Mark, hearing about it on the radio(!), raids the TV studio in another hit. But while it’s all crazy, it’s another example of how Roberts so constantly squanders his bizarre setups throughout the novel. I mean, the zombiefied populace subplot is only barely explored – early on we get strange stuff like mind-blown townspeople trying to mow their lawns despite the feet-high snow, and other random oddness – and posthaste Mark’s blowing up the datura at the water processing plant.

Further evidence of this is that the last quarter of Aryan Onslaught goes in a completely different direction. Mark, wearing a gas mask and hitting the studio with tear and nausea gas, manages to take out Toby (via a falling TV camera!); the AB leader dies laughing that this Coalville plot was just the beginning. He mentions something about the three main AB leaders being in Soledad Prison. Mark returns to his desert Stronghold, where Professor Haskins and David Red Eagle realize the Penetrator has fallen in love. They also are nonplussed over his insistence that he needs to go to jail.

Thanks to a prison lead courtesy Mark’s cop pal Kelly Patterson, still recovering from the ninja beating he got back in #27: The Animal Game, Mark is able to pose as a Soledad laundry contractor in an overly-drawn out bit of setup. Funnily enough, all this elaborate “prison life” exposition and setup is quickly dispensed by one of the most lowbrow finales ever: Mark simply stabs the three AB leaders in Soledad in the back, one at a time, as he lures them into the laundry room! After this he leaves his usual arrowheads to show that the Penetrator will find his prey no matter where they are.

And talk about wiping away even more elaborate setup – despite planning to marry her just a few pages before, at the end of Aryan Onslaught Mark basically just tells Angie “so long – my life’s too dangerous to get involved with anyone,” and she’s all okay with it, agreeing that she too got a little carried away! Jeez…maybe it was the datura in the water? Mark also apparently skips all over the part where he decided the Stronghold should be moved, especially given its secure location has twice been compromised in recent volumes.

Livened up by periodic action – which unfortunately isn’t as gory as that in Cunningham’s installments – Aryan Onslaught benefits from an unusual plot and a well-described location…in fact the brutal blizzard conditions of Coalivlle bring to mind the snow-blanketed Chicago of The Executioner #8.
Posted by Joe Kenney at 6:30 AM