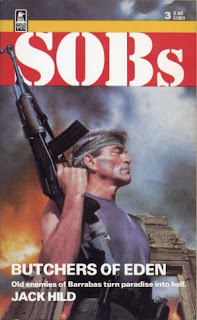 Alan Philipson turns in this third volume of SOBs, which takes place not long after the previous volume, which was also courtesy Philippson. Running to 219 pages (a bit long for a Gold Eagle novel of the era, I believe), Butchers of Eden doesn’t really feel much like a SOBs novel for the first half or so.

Instead, it’s more of a no-frills suspense deal, one with a vague Joseph Conrad vibe, or maybe that was just the Nyquil I was taking at the time. Nile Barrabas is in Sri Lanka with his “blonde goddess” girlfriend Erika Dykstra and her heavyset brother Gunther; the siblings run the family arms-supplying business, and are series regulars while not officially being members of the SOBs. The trio have come here to Sri Lanka to help out T.M. Something-Or-Other (he has like a sentence-long last name), who oversees the family business in this part of the world.

But there’s trouble brewing in “Eden” (as Barrabas thinks of Sri Lanka); the population, roughly split between Buddhists and Hindus, is on the verge of civil war. The Buddhists, whom we are told are lazy and indolent, like to blame all their troubles on the hard-working Hindus, and given all the problems lately the Buddhists are becoming even more and more hostile. To the point that T.M., a Hindu, is pressured by Erika and Gunther to leave Sri Lanka, taking his family along with him. Barrabas has come along…well, for some reason, I guess.

This opening section seems to come from a whole different genre than men’s adventure, with the Buddhist-Hindu tensions rapidly heading toward boil, and Erika and Gunther vainly trying to get T.M. to leave the country. Philipson occasionally cuts over to Karl Heiss, onetime CIA agent turned heroin trafficker turned mercenary, last seen in the first volume. Back during the ‘Nam days Heiss ran a heroin empire with the depraved Vietnamese colonel Son Ny; a heroin empire which was destroyed by young Nile Barrabas, in an origin story somewhat similar to that of The Penetrator.

As we’ll recall from the first volume, Heiss was not killed by Barrabas at the end of that story (for lame reasons), instead turned over to the local police there in Kaliba, Africa, where Heiss had been part of a revolutionary plot. Butchers Of Eden opens with Heiss in nearly skeletal shape, having suffered these past three months in the dank hellhole; he is saved by merciless American mercenaries he remembers from the ‘Nam years. Men who were part of Son Ny’s mercenary army, these guys free Heiss and take him to Sri Lanka, where Son Ny has set up his most recent shop.

Son Ny wants to start up his heroin empire again, and wants to work again with Heiss. As an incentive he offers Barrabas’s head on a silver platter; knowing Barrabas is here in Sri Lanka, Son Ny has planned a trap. He’s taken over a rubber plantation deep in the jungle and stocked it with men, machine guns, and booby traps. The plan is to capture Erika Dykstra, whom Son Ny himself has lusted after since Vietnam, and to lure Barrabas in to rescue her. Heiss says what the hell and agrees.

The trap is sprung while the Buddhists are in full-on riot in the streets of Sri Lanka; Erika and Gunther, having been taken downtown along with T.M. by the corrupt cops, are attacked by those mercenary soldiers. Despite being shot in the friggin’ head, Gunther somehow lives, but Erika is captured. Barrabas scouts out the rubber plantation and makes a call to his CIA contact, Walker Jessup, who each volume is the man who assembles the SOBs. Nearly haflway in we are finally reunited with them, and all the surviving members from previous volumes return, save for Hayes (aka “the black one”) and Dr. Hatton (aka “the female one”).

While those two don’t appear, a quite unexpected character does – none other than The Executioner himself. While dozing in the jungle Barrabas dreams of a ‘Nam incident he shared with “Sgt. Mercy” as they chased a phantom squad of Viet Cong. It’s a nice scene but one gets the suspicion the idea was forced upon Philipson by Gold Eagle’s editors to ensure consistency with the rest of the line. And anyway it’s all forgotten once the SOBs show up and launch their assault on the rubber plantation.

Obese Walker Jessup has also come along, much to Barrabas’s surprise, and Philipson has him meeting the other SOBs face-to-face for the first time. He remains behind to watch for any attempted escapes on the sole rode out of the plantation while the rest of the force handles the dirty work. It’s all very military fiction-esque as the SOBs take out gun towers and roving security patrols. It gets a bit more men’s adventure-esque (ie less concerned with real-world “strategy” and such) when Lopez, the wiry Hispanic SOB, appropriates an M-60, drapes some ammo across his shoulders, and goes around blasting people, places, and things to shreds.

Heiss for unstated reasons spares Erika, who has been kept bound to a chair throughout. Heiss and Son Ny escape, but Jessup stops them – turns out Jessup has come here because he was under orders to ensure Heiss’s escape, as the CIA wants to use him for some unknown purpose. Barrabas is properly pissed when he finds out, but there isn’t much he can do, plus Erika is unscathed, so there’s that. And meanwhile Barrabas has sliced Son Ny in half with a car! A pretty grisly ending, but I figured Son Ny would stick around for more volumes.

And that’s that – T.M. Whasisname and family do in fact leave Sri Lanka at the end (and Philipson by the way includes a too-long subplot about T.M.’s family overcoming various setbacks and dangers), and Barrabas heads off for the next volume, which hopefully will be a bit more entertaining. Not that Butchers Of Eden was bad – Philipson’s writing was as ever quite good – I just didn’t enjoy it as much as the other SOBs I’ve read. Save of course for the first one, which was a dud.
Posted by Joe Kenney at 6:30 AM