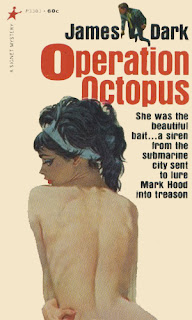 I’ve been looking forward to this volume of Mark Hood since I first learned about the series. In this pulpy installment, karate-loving Intertrust agent Hood ventures to a domed underwater city where he takes on Nazis who are experimenting on human subjects, to make them mermen. Plus they’ve captured a nuclear sub and plan to conquer the world! So as you can see, the series continues to veer further and further from its relatively-realistic roots.

First though a word on the ordering of the volumes. According to the essential Spy Guys And Gals site, Operation Octopus is volume 9 of the Signet editions and Spying Blind is volume 8. However, judging from the copyright dates of each book, as well as the Signet numbering system on the front covers, Operation Octopus was actually published before Spying Blind. Also, The Sword Of Genghis Khan is listed in the front of Operation Octopus as the most recently-published volume. So, at least according to the US printing schedule, this would be the 8th volume of Mark Hood. Perhaps it was published after Spying Blind in the series’s native Australia.

Not that continuity is much of a concern; at 125 pages of big print, Operation Octopus is a fast-moving pulp yarn with no pretensions whatsoever, let alone any worries over filling readers in on what came before. Hood himself takes a few chapters to appear, and there’s no setup on the character other than the basic facts – he’s 36 and works for Intertrust. And whereas previous volumes have partnered him up with either karate sensei Murimoto or wise-cracking fellow agent Tremayne, this time Hood goes off on assignment all on his lonesome. Perhaps J.E. “James Dark” MacDonnell realized he was unintentionally making Hood a supporting character in his own series; last time, as just one example, it was Murimoto who consistently saved the day.

The opening few pages set the precedent for what will follow; in a bravura bit of economical pulp storytelling, Dark opens in 1945 in the last days of the war, as a U-Boat escapes crumbling Germany, commanded by a pair of scientists: Ulrich Klepner, a superhumanly-gifted surgeon, and his corpse-faced ghoul of an assistant, Bergmann. They’re on their way to what will be their new home: a city beneath the sea, built so close to America (near the Bahamas) that no one will ever dream of looking for them there! And that’s it – that’s all the setup we need, and that’s all the setup we get.

Now cut to April of ’68, and a Polaris missile-bearing nuclear sub, commanded by an old service pal of Hood’s named MacLane, is in the Tongue of the Ocean testing underwater weapons. It’s caught in a net of mutant radioactive plankton, and then German frogmen in strange silver wetsuits board the ship and take the men captive. Yes, the Nazis have now built a veritable wonderland 300 feet below the surface, complete with control rooms that with the turn of a dial can activate those mutant plankton, not to mention “underwater flying objects” made of tungsteen “gossamer” threads that can go faster than any other ship. Plus they’re doing experiments on prisoners, trying to graft fins and gills on them to create mermen. Why not? The veteran pulp reader will note that this plot is mysteriously similar to that incredible volume of Nick Carter: Killmaster, The Sea Trap, with a bit of the plot of another Killmaster yarn, Moscow, tossed in for good measure.

Enter Mark Hood, having a picnic by himself along Lake Geneva – without even the mandatory babe! He’s given his assignment by Blair, the American boss at the Switzerland Intertrust HQ, and Dark seems to forget that in previous books Blair rarely (if ever?) spoke; it was always the French boss, Fortescue (who goes unmentioned this time) who gave Hood his marching orders. The convoluted briefing has it that a “merman” washed up on the shores of New Orleans, and this underwater weapons tester named Spooner was approached in that same city by a bodacious blonde named Inga who tried to, uh, pump him for info on top-secret weapons. After this the girl disappeared, and then the Polaris sub went missing. Hood is to pose as a disgraced Naval officer, kicked out on spying charges, and to slouch around the streets of New Orleans and hope he’s contacted by Inga.

Unsurprisingly, the plan works – Hood is contacted just a few pages after arriving in New Orleans. As mentioned, the book is pure pulp all the way, and pausing to think about what you’re reading is not suggested. We get the first of the novel’s three action scenes as Hood beats some stooge to pulp, breaking his arm with the usual karate bravado; the stooge, never mentioned again, works for Inga, who sent him here to this sleazy bar to collect Hood. Not that it much matters, as Inga comes along anyway, and basically hires Hood straightaway. Soon enough she’s “testing” him, from scuba diving (where she pretends to have underwater delirium to test Hood’s responses) to his skills in the sack: “What are you like as a man?” she taunts him. Here’s the extent of the sex scene Dark provides: “Half-angrily, half roughly, [Hood] showed her.”

Despite the brevity and breathless pace, Dark still manages to create nice little moments, like when Hood and a seemingly-unconscious Inga surface in the middle of a New Orleans downpour. But there isn’t much time for much of this sort of thing; even the description is kept at a bare minimum, like the “space suit”-esque, “sheathlike” suits worn in Klepner’s underwater lair which are not elaborated much upon. Inga promptly takes Hood to the underwater city in a veritable Undewater Flying Object. We get some specious “science” here that all of Klepner’s inventions are made of tungsten, so densely woven as to be “gossamer threads.” After a bit of suspicion, particularly from old U-Boat commander Korth, Klepner is willing to take Hood on as a new recruit: Inga is certain Hood’s intelligence will be a great aid in the cause, which is, of course, the total domination of the world – Klepner plans to nuke Miam with one of those Polaris missiles for starters.

Hood loses his cool when he comes upon Klepner casually lobotomizing old Navy pal MacLane; when he tries to strangle Klepner in his rage, Hood’s later able to bullshit his way out of being killed by insisting that, if he really had wanted to murder Klepner, he would’ve used the dreaded shuto chop of karate! He explains away the whole strangling bit as his nerves being frayed and whatnot. So Klepner rolls in a towering henchman for Hood to prove himself upon; Hood kills him with a single shuto chop to the neck. Hood’s first kill in the book. He’s saved his skin, but later Korth tries to feed Hood to those mutant plankton, and it’s time for the dreaded shuto chop again – Hood’s second kill. His third and final kill is the most surprising of all: Inga. So for once we have a scene where the hero actually kills the villainess, an event most of these pulp authors gloss over: “Quickly and efficiently [Hood] broke her neck.”

But instead of the underwater Nazis and their high-tech contraptions – not to mention those friggin’ mermen – Dark instead focuses on the lobotomized crew of the captured sub, in particular Hood’s efforts to get through to his old pal MacLane. Indeed, all the good stuff is effectively brushed aside off-page; Hood sets the dial that controls the mutant plankton to maximum and escapes in the sub with MacLane and his officers – Hood having figured out a way to countermand MacLane’s brainwashing – while the plankton destroys the city. In other words, Dark doesn’t even bother to deliver a proper send-off for Klepner or Bergmann; he just leaves it that Hood assumes all the Nazis are killed by the rioting massive plankton.

As mentioned, I’ve been wanting to read Operation Octopus for a while now. If you’re into underwater scuba spy action like I am, then it pretty much delivers, though not on the scale of the film Thunderball or anything. In fact, despite featuring an entire city of Nazi frogmen, the book plays out on more of a smallscale nature. In truth I would’ve preferred a bit more of a pulpy flair; Inga is not exploited nearly enough – I mean come on, she’s a friggin underwater Nazi She-Devil, yet Dark doesn’t do much to bring her to life – and I could’ve used more of the freakish “half-men, half-fish” stuff. I still can’t believe it never occurred to Dark to have Hood, you know, maybe meet one of them.
Posted by Joe Kenney at 6:30 AM

The Australian cover is fantastic:
https://pictures.abebooks.com/THOTH/17720856600.jpg

As you say, you can go through dozens of violent stories (I go through LITERALLY dozens, at least in a sketchy way) without seeing a villainess / MALE hero showdown, as opposed to those hundreds of "cat fight" scenes (again, LITERALLY, at least in the movies). Which is one of the attractions of the male / female kind, since it seems to be breaking a rule even AMONG violent stories.
Even though I think you said you're not terribly fond of them, that makes me wish you'd review more of the early Destroyer books (to somewhere around # 23), since they're full of great villainesses. And even though it sounds prejudiced, hardly a single heroine to have it out with them, which usually leaves only the Remo character.

Maybe it's stepping on sacred ground, but one thing I usually DON'T go in for is Nazis as villains. That's because for me they're right up there WITH cat fight scenes, considering how often they're used. So even when the idea is used cleverly, you can be impatient with it.